OU regents named an interim president, but community members continue to demand transparency when choosing the next permanent leader. 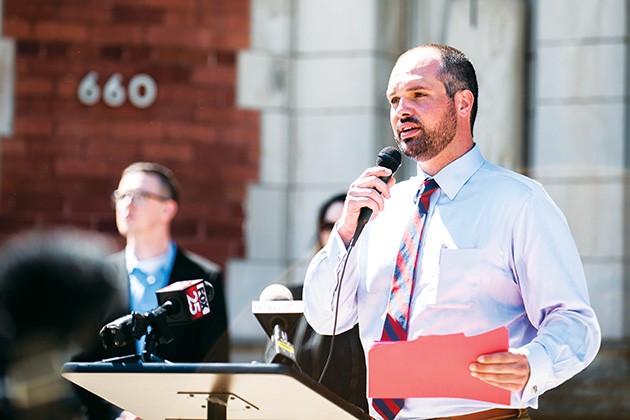 University of Oklahoma Board of Regents named an interim president less than a week after James Gallogly announced his retirement. The decision came around 2 a.m. May 17 after an executive session that lasted nearly six hours.

Joseph Harroz Jr., current dean of OU College of Law and director of its law center, will be interim president effective immediately and for at least 15 months — five months longer than Gallogly’s tenure. Harroz will also be eligible for the permanent position.

“On behalf of the Board of Regents, I am pleased to announce tonight that OU College of Law dean Joseph Harroz Jr. has been appointed as interim president of the University of Oklahoma,” chairwoman Leslie Rainbolt-Forbes said in an statement. “The regents were well aware of Harroz’s capabilities from the thorough vetting done by the presidential search committee last year. It was through that process we were reminded how contagious his passion and enthusiasm are and how seriously he takes accountability and responsibility.”

Harroz, an OU graduate, served as legal counsel to former OU president David Boren when he was a senator. At 12 years, he also holds the longest tenure in OU history as the university’s general counsel — all under Boren’s leadership. Some commend the regents’ pick, as Harroz has led the college of law since 2010, but others disagreed with the appointment of Boren’s former legal counsel.

Jess Eddy, who accused Boren of sexual misconduct, said he is disappointed in the appointment of Harroz, especially as the Boren investigation is still ongoing.

“We have no choice but to keep the pressure up and keep bringing this information to light, shining a light, exposing the past indiscretions.” — Suzette Grillot tweet this

“It’s just unbelievable; I’m beyond disbelief. The regents are exposing that they’re compromised by gross conflicts of interest,” he told Oklahoma Gazette. “There’s nobody closer to president Boren than Joe Harroz professionally, personally — Joe was Boren’s protege. Additionally, Joe’s been Boren’s attorney for decades. … Everybody knows Boren’s predatory behavior has been ongoing for decades as well. The idea that you put a guy who can protect himself from telling the truth about David Boren through attorney-client privilege — somebody who knows where the bodies are buried, how to dig them up and move them — in a position over Title IX who can have direct influence in those proceedings, I mean, inappropriate is an understatement. It’s unethical. It’s immoral. … It’s a testament to how powerful the Boren donors are.”

Professor Suzette Grillot, former dean of OU College of International Studies, echoed Eddy’s sentiment, telling Gazette the appointment of a “Boren crony” was disgraceful. Both Grillot and Eddy were at the board of regents meeting.

Rainbolt-Forbes was asked during the announcement if it was problematic that Harroz would be overseeing Title IX processes, as is the responsibility of the president. She did not say whether or not Harroz would be involved in the Boren investigation.

“Rainbolt fumbled around for an answer, looking at the other regents, looking for confirmation of what she should say, and said, ‘Well, the regents will be in charge of the investigation,’” Grillot said. “I can confirm for you that it was an awkward exchange and she was very unsure of her answer. It’s not just a matter of her words; it’s how she answered it — she was very unsure. I can also say that I don’t believe it, and I think most of us don’t believe it.”

The regents’ announcement comes after a May 15 press conference at which several members of the OU community urged the board for transparency, inclusion and thoughtfulness in selecting the next president. Several current and former students and employees, an NAACP representative and a victim’s advocate and activist spoke at the event. They also spoke as representatives of LGBTQ+ and other minorities to emphasize that the university must do better to serve members of marginalized groups.

“Representatives from the community got together, requested transparency, asked for transparency, spelled out why — we had reasons why. The reasons are good ones; we spelled them out last year, outlined all the reasons why last year, and you can see what the search resulted in last year; it was a disaster,” Grillot said. “To ignore that once again just really tells you something about this very insular, arrogant board of regents that they don’t listen at all to the members of the community that they serve and work for.”

Eddy said the regents’ actions illustrate the fact that they do not listen to the campus community.

“It’s a slap in the face. Clearly, they do not care what we think,” he said. “I’m taken aback that they continue to double down and just engage in the same pattern of conduct with which there’s been so much outcry and public criticism for. They just don’t care, and really that’s the problem with the institutions of the regents. They’re not accountable to anyone. They’re not accountable to any of the people that they serve, so there’s no enforcement mechanism that really inclines them to care.”

Because of their actions and their doubling down on the lack of accountability and transparency, Eddy said some — if not all — of the regents should step down. He said many students he advocates for diversity, inclusion and transparency with have begun conversations on the general institution of the regents.

“We’re at the point of seeking constitutional reform to how the regents are as an institution with the desire of making it more democratic so [students] have some formal avenues to engage and influence the regents,” he said. “The regents aren’t elected. The strongest proposal is that the regents need to be elected by the students, faculty and staff in some way, shape or form, but this notion of affluent almost all white people getting appointed as gubernatorial favors is just not going to work anymore.”

Grillot said members of the community must keep the pressure up to make change.

“We need to continue to show up. People have been showing up at rallies, at regents meetings, and so we’ve got to keep after these people to do what is right by those that they serve and not solely what’s in their own self-interest,” she said. “We have no choice but to keep the pressure up and keep bringing this information to light, shining a light, exposing the past indiscretions, past corruption and wrongful processes that these regents have selected in doing their work. We can’t back down.”

Gallogly announced his plans to retire in a May 12 statement.

“Unfortunately, a false narrative has been created that the explanation of the university’s financial condition, the disclosures of improper gift reporting, and changes to various people serving in the administration were somehow intended to diminish the legacy of our past president,” the statement read. “That false narrative is now also being used to question the motives and propriety of the ongoing investigation of alleged misconduct by person(s) yet to be disclosed by the university.”