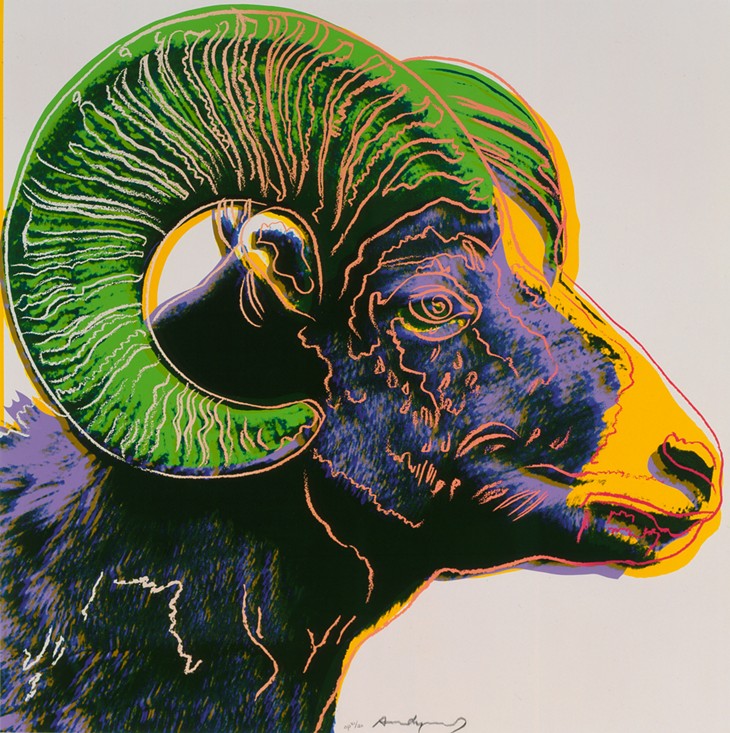 Now that the Museum has reopened to the public many of the current exhibitions have been extended to give visitors ample time to come and experience them. The exhibitions include: Warhol and the West, Dorothea Lange: Politics of Seeing and Find Your Western, all of which will now be on display through July 5, 2020 and Colors of Clay, available until June 21, 2020.

Warhol and the West

Warhol and the West explores Andy Warhol’s love of the West represented in his art, movies, attire, travel and collecting. Many are unaware he wore cowboy boots (many paint splattered) and traveled often to places like New Mexico, Texas and Colorado, where he acquired a vast personal collection of Western art, pottery, photographs, artifacts, fashion and accessories. In 1986, Warhol completed his Cowboys and Indians portfolio, the last major project before his death.

The Cowboys and Indians portfolio includes 14 iconic images of Western subjects such as Custer, Geronimo, Annie Oakley, and John Wayne and serves as the backbone of the Warhol and the West exhibition. Beyond the portfolio some of his other western subjects include Elvis as a movie gunslinger, Clint Eastwood, Dennis Hopper, guns, Indian art, Western artists R.C. Gorman, Georgia O’Keeffe and Fritz Scholder, plus two Western movies he produced. In addition to the rare Warhol series, more than 100 Western objects and other works from the artist’s own collection will be displayed.

Dorothea Lange: Politics of Seeing, examines a broad range of the artist's work through the lens of social and political activism. From documenting the plight of Dust Bowl migrants during the Great Depression to magnifying the experiences of incarcerated Japanese Americans during World War II, Lange’s photographs illustrate the power of photography and illuminate major social issues of the 20th century. Although Lange’s photographs were taken more than 50 years ago, many of the issues they address remain relevant today: poverty, environmental degradation, and treatment of immigrants, the erosion of rural communities, racial discrimination and women’s rights.

Through approximately 80 photographs – including vintage prints and unedited proof sheets as well as personal memorabilia and historic objects – the exhibition examines how the beloved American photographer’s artistry and advocacy swayed minds and prompted significant change. Politics of Seeing will highlight Lange’s works focused on the Great Depression, the Japanese Internment, World War II, Postwar California, race and the criminal system. Film clips of Lange speaking about her work will also be presented, as well as comments from people who knew her.

Find Your Western encourages visitors to explore the Western genre and its influence on pop culture in the United States as well as other countries. Visitors will be greeted with a collection of movie posters, film stills, comic books, pulp publications, novels, costumes and more, all exploring how different people have interpreted the West. Some highlights include Giant the 1956 film starring screen legends Elizabeth Taylor and James Dean, Grapes of Wrath by Nobel Laureate John Steinbeck, Clint Eastwood’s 1980 comedy Broncho Billy and costumes from Gail Davis’s portal of Annie Oakley on the 1950s TV series Annie Oakley and Robin McLeavy’s Hell on Wheels character Eva Oates. Many of the works discussed are represented by foreign language materials, hinting at the global reach of the Western.

Colors of Clay explores the cultural and regional diversity of Native American ceramic traditions in North America. Visitors are invited to experience the 60 one-of-a-kind, vibrantly colored pieces that were sculpted with absolute precision. Clay pots, bowls, pitchers and jars, which were once seen as a necessity of daily life, are seen today as one of the most notable Native American art forms. These ceramic pieces made from earth, water and natural dyes are works of art and should be viewed not only as a cultural tradition dating back thousands of years, but also as an artistic medium equal to oil paintings, watercolors or sculpture. The skilled hands of an artist take the piece from its beginnings as clay into a beautiful work of art steeped in ancestral methods while creating unique shapes and intricate designs.

Paired with the exhibition will be a collection of wall images from famed 19th century photographer Edward J. Curtis. He was considered to be an authority on Native Americans, which is evident, by his body of work that focuses primarily on Native American people and the American West. Several short videos will be playing as part of the exhibition to help educate visitors on various ceramic processes such as firing and other artistic techniques.

Colorful 20th century illustrations make-up the Storytellers and Sellers: Artist Illustrators exhibition, March 21 – November 15, 2020. This will be a chance for visitors to see rarely-exhibited items from the Dickinson Research Center, which showcase the illustrative backgrounds of many of our western artists.

Illustrators used their skills to capture the imaginations of consumers by creating original art for things like book and magazine covers, advertisements, billboards, movie posters, labels and much more. These early illustrations were not only a source of entertainment, but instrumental in shaping popular culture of the early 20th century.

Girls of the Golden West: New!

Girls of the Golden West, a new exhibition invites visitors to discover the story of American West Women, May 23 – August 30, 2020.This will be a chance for guests to see rarely seen treasures from the vault and extensive archives of the Dickinson Research Center.

Girls of the Golden West, takes its name from “The Girl of the Golden West” a 1905 theatrical play by David Belasco draws on the Museum’s vast art and photo collections to showcase the stories of the many female cultural influences that came together to build the American West. Visitors will experience works spanning from 1800s to more modern pieces in the form of oil, acrylic and watercolor painting, hand-colored engraving, photographs, pastels, plaster and bronze.

The year 2020 marks the 100th anniversary of the passage of the 19th Amendment, which guarantees and protects women's constitutional right to vote. A lot of thought and programing at The Cowboy have gone into making 2020 the Year of the Woman as evident by the creation of Girls of the Golden West and other upcoming exhibitions that celebrate that women of the West, who enjoyed some of the earliest suffrage victories and were among the first to gain the right to vote.

The National Cowboy & Western Heritage Museum in Oklahoma City is America’s premier institution of Western history, art and culture. Founded in 1955, the Museum collects, preserves and exhibits an internationally renowned collection of Western art and artifacts while sponsoring dynamic educational programs to stimulate interest in the enduring legacy of the American West. For more information, visit nationalcowboymuseum.org.