Practically the definition of “high concept,” Pride and Prejudice and Zombies (PPZ) succeeds as one of the rare titles that delivers exactly what it promises: It’s the classic Jane Austen romance with stumbling rotters infesting and infecting the landed gentry of Regency England.

Writer-director Burr Steers (Charlie St. Cloud, 17 Again) delivers a much better film than most would expect, partly thanks to a cast liberally plucked from the finest British TV shows, but also because Steers trusts in both Austen’s original text and Seth Grahame-Smith’s 2009 pastiche novel. This is a film that can be appreciated by both Austen fans and zombie mayhem enthusiasts.

PPZ stars Lily James as Elizabeth Bennet, the willful second-oldest daughter of landed gentleman Mr. Bennet (Charles Dance, Game of Thrones). Mrs. Bennet (Sally Phillips) is most concerned with marrying her comely daughters off to wealthy suitors, but Elizabeth will have none of that, considering her proto-feminist stance against being treated as chattel and, well, the zombie war that has raged for a half-century.

Elizabeth and her sisters were all trained by Chinese masters in the art of knife-fighting and swordplay, speak fluent Mandarin and can easily best their male counterparts in splashing brains across the English countryside. This is why Elizabeth is none too impressed with dainty fool William Collins (Matt Smith, the 11th Doctor in Doctor Who), Mr. Bennet’s clergyman cousin and, due to patriarchal society, his next rightful heir. Mr. Collins wants Elizabeth to marry him, but he also wants her to give up her blades and stay in the kitchen. That will not do.

Collins is a stark contrast to Mr. Darcy (Sam Riley, Control), a socially awkward British colonel and expert zombie killer. Elizabeth cannot abide Darcy’s pride or his prejudice, yet they are such a fine match when it comes to disemboweling the undead. James, who played Lady Rose MacClare on Downton Abbey, makes a great, headstrong Elizabeth, while Riley is clearly channeling the awkwardness of Colin Firth’s Darcy from the 1995 BBC miniseries.

PPZ largely succeeds because Steers clearly understands the need to keep the English majors happy while delivering putrefied viscera for Dying Light gamers. If anything, Steers favors the Austen text a little too much — there are long stretches when all is normal at Pemberley and the characters’ actions aren’t deviating much from Austen’s novel of manners. But then Steers folds in the zombie violence so seamlessly that it all makes a certain amount of sense. For Pride and Prejudice readers, it even clarifies why there was such an enormous military presence in Hertfordshire. 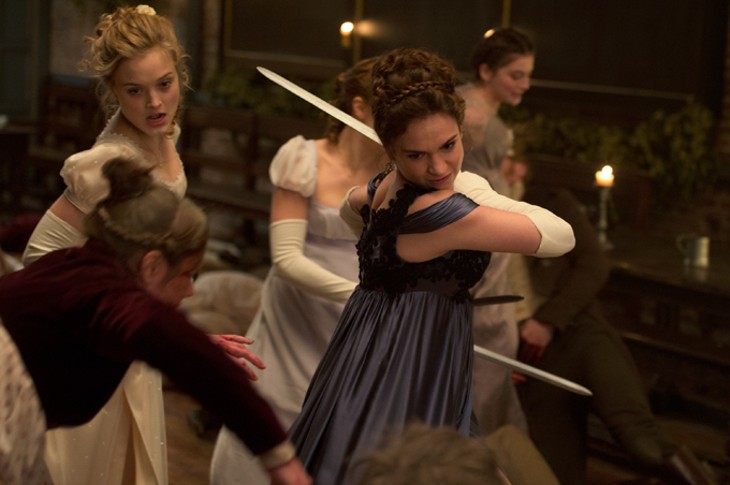 The most nagging problem with PPZ is the degree to which Steers appears to be holding back on the buckets of blood. War-hardened acolytes of The Walking Dead will notice every time Darcy crushes a skull off-camera or there’s a cutaway when Elizabeth is cutting away. PPZ is PG-13, which is patently ridiculous for a zombie film. Was the studio hoping to score all that hot money from the teenage Pride and Prejudice-loving demographic? All these years of corpuscle-heavy bludgeoning on basic cable has raised the bar in terms of what viewers expect of the zombie apocalypse.

PPZ is a wildly imperfect film that impresses for what it is, but also for what it is not. Imagine this material in less-capable hands, like those of Aaron Seltzer and Jason Friedberg, the purveyors of down-market parody films of the early aughts, such as Date Movie and Epic Movie, who have lately been going straight to streaming services. It’s not unimaginable that PPZ could have landed with those kind of bottom-barrel swill merchants at one time, resulting in a total clown show. Just picture a worst-case scenario in which Darcy, à la Firth, comes out of the lake in his puffy shirt as fishy water pours from the bite marks on his torso.

Fortunately, Steers cares enough to keep things relatively highbrow, which makes the juxtapositions of Regency propriety and corpse butchering more surprising and genuinely funny. When Cersei Lannister herself, Lena Headey, shows up as an eye-patched Lady Catherine de Bourgh leading an army of ninjas, it takes the socially intimidating character from Austen’s original and gives her some real power of intimidation. When it comes to the zombie war, Lady Catherine de Bourgh is most seriously displeased.

Pride and Prejudice and Zombies will still give some English professors angina for taking liberties with a sacred text, but it is far more respectful of Austen than some direct adaptations and more appreciative of its charms than recent films like Jerusha Hess’ Austenland. Whether it pushes people to read Pride and Prejudice or to play Resident Evil, PPZ has its oozing head on straight.