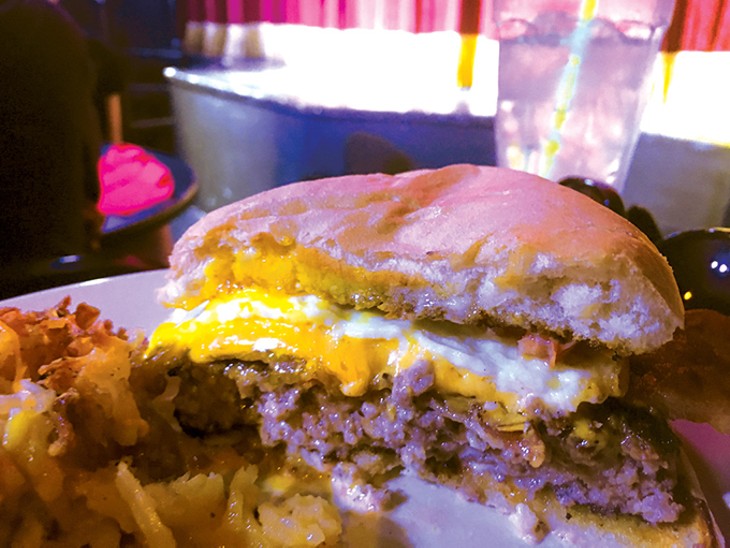 When Out magazine named The Boom! one of the top 200 gay bars in the world in 2013, it singled out Sunday Gospel Brunch as the one event you don’t want to miss, and for good reason.

The show has been led by drag queens Rev. Kitty Bob Aimes and Rev. Norma Jean Goldstein since 2009, not long after the bar and restaurant moved to its current location at 2218 NW 39th St.

Brett Young, who is The Boom’s co-owner with John Gibbons, plays Aimes. Young has performed around the country since graduating from Oklahoma City College, according to The Oklahoman, working as artistic director for a theater in Wichita, Kansas, taking a gig with the Osmonds and performing in the first European tour of Oklahoma!

When the opportunity came to move to The Boom!, Young relied on experience with a construction company to help build much of the now 9-year-old building himself. Young is also the main writer for the Sunday Gospel Brunch, which includes lip-synched song performances complete with comical crowd work and four segments built around interactions with normal co-host Jeffrey Meeks (Goldstein) and audience participation.

With two shows noon and 1:30 p.m. Sunday, The Boom! operates like a well-oiled dinner theater machine. There are two bars: one near to the right of the entrance where patrons can pre-game for the show and another in the stage room.

I arrived for the 1:30 p.m. Father’s Day show a few minutes early to find staff quickly cleaning the stage room for its second show and was seated by 1:35 p.m. A server takes drink orders while seating large groups of families and friends in an expedient manner.

The menu is a pretty straightforward brunch menu devoid of any truly odd Frankenstein breakfast and lunch mash-ups. The chicken-fried steak ($14.50) — angus beef fried and served on a bed of roasted potatoes and topped with gravy and two fried eggs — earned good remarks from staff and diners around me.

I nearly ordered the smoked salmon bagel ($11.50), a toasted bagel topped with cream cheese, smoked salmon, diced boiled egg, red onion and capers. It seemed to be one of the most popular items of the afternoon and was aesthetically pleasing when brought out from the kitchen a few minutes before the show began.

I opted to go with the breakfast burger ($11.50) to test the kitchen because I assumed the salmon and bagel were not made in-house. A half-pound beef patty is topped with a fried egg, bacon and cheese that comes with a side of au gratin hash-browned potatoes and sliced tomato.

The burger is exactly what I’d want for a hangover cure on a bun if I was in need. The burger is well-cooked, and the combination of all four ingredients, which are accompanied by a heavy helping of mayonnaise, has enough grease to waylay the residual headaches and spins from the previous night’s escapades.

I found that the burger greatly benefitted from the slice of tomato, if only to give it some acidic contrast. It might benefit if the mayonnaise transformed into an aioli with either lemon or herb infusion to bring some brightness to the dish, but overall, it was a very enjoyable dish.

The au gratin hash-browned potatoes were essentially a hash brown casserole that I’m assuming was baked early in the morning and kept warm for both services. It hit all the creamy and starchy notes you want in a casserole, if the once-crispy top had gone slightly chewy while keeping warm.

Alcohol served during the show includes mimosas and bloody marys. The group next to me discovered a hidden surprise in the pitcher of mimosas ($25): vodka.

“It’s like a new drink: a Screwmosa,” they said.

Not long after the server cleared the table, Elvis’ version of “Swing Down Sweet Chariot” began playing over the speakers to signify the show was about to begin.

Aimes emerges from behind the curtain in trademark blue-and-yellow robes with a blonde wig and glasses while lip-synching to “I Saw The Light / Do Lord / I’ll Fly Away” by Jim Hendricks. Aimes goes through the crowd, high-kicking, showing off her girdle and picking up her robes and placing them over willing participants in the crowd.

She welcomes the crowd to “church in a gay bar” while beginning crowd work to warm up the audience for an afternoon of one-liners, roasts and shock-laughs.

“Oh, are you a family?” Aimes asks a large group. “You look like the state fair.”

The barbs come fast and furious. 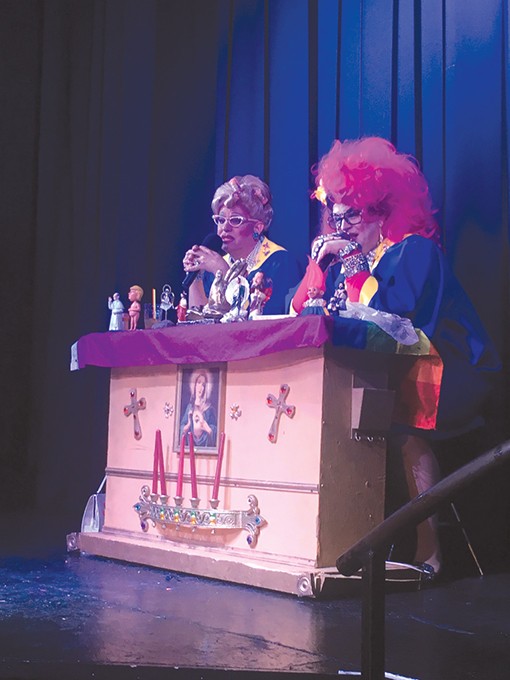 “Is that a Hawaiian shirt? The way you eat, you should be gay. You’re putting away that burrito. How long have you been straight? All your life? Well, we don’t count that weekend at the Delta Chi house,” Aimes said.

With Goldstein out for Father’s Day weekend, Aimes brought out Lux Bentley, who took the stage with a large pink wig and panache to match.

“I see you’ve been playing with the Kool-Aid again,” Aimes said of Bentley’s wig. “I wanted to go with Ronald McDonald but ended up with [disgraced Trinity Broadcasting Network founder] Jan Crouch instead.”

Aimes and Bentley sit behind a desk filled with kitschy and real religious iconography for a Gospel News segment to riff on real-life weird news stories, which include the viral clip of a dog at the Tulsa Drillers game, chasing baseballs. The duo brings members from the crowd on stage to celebrate birthdays and then welcomes a group of three from the audience for a singalong to “Just A Little Talk with Jesus” by The Statler Brothers as Bentley brought out pom-poms and a traditional Jesus cutout that, when flipped, revealed a depiction of Jesus with a Pride flag and Black Lives Matter sign.

Bentley gave an emotive and passionate solo performance to Vickie Winans’ “Long As I Got King Jesus” before reconvening to another set of jokes built around Twitter musings. The show closed with a rendition of The Happy Goodmans’ “Looking for a City” as Aimes passed out white napkins for the crowd to wave to the tune.

The whole event is very well-run, but certainly not for the faint of heart.

“I’d love to come back and bring my most conservative friend, just to see their reaction,” said a person seated next to me.

The show adds a $5 cover charge to the bill, and it’s a deal hard to beat. The food and drink is reasonably priced, and the show is worth more than $5 alone.

The Boom! hosts free shows at 8 and 11 p.m. Friday and Saturday night for Pride Week and a drag marathon that will start after Sunday’s Pride parade and go until 2 a.m.