Community members pooled resources to build Oklahoma City Pride Alliance and its events from the ground up. 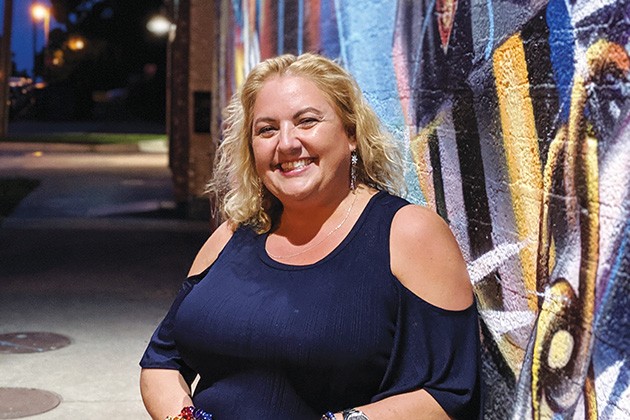 Oklahoma City’s Pride events were hosted by Pride, Inc. for decades, but an embezzlement scandal crippled the organization. Lori Honeycutt, former Pride, Inc. president, was charged with one count of felony embezzlement last year, but litigation is still ongoing.

Lauren Zuniga, while serving as 39th St. District Association president, encouraged the district to step up and host Pride while Pride, Inc. dealt with the investigation. However, being a commercial district made logistics difficult, and association members were also concerned about liability.

“It made the most sense for us just to start our new organization,” said Zuniga, who now serves as Oklahoma City Pride Alliance president. “OKC Pride, Inc. has now voted to dissolve, and the remaining board members — there’s only three of them — are on our team, hanging out and helping us put on this festival. Essentially, it’s all united for Pride, and going forward, the Pride Alliance will be the presenting organization.”

The transition from 39th St. District to Pride Alliance was somewhat rocky because it required transferring various assets and accounts quickly.

Alison Scott, a member of the Pride, Inc. board, said its members have been helping the district attorney gather information and were told not to discuss the situation, which is why so little information was disclosed. Scott had to recreate the organization’s QuickBook file to rebuild financial records since 2016, and interim president Brandon Odom had to investigate purchases that might not have been Pride, Inc. expenses.

“Fast forward to May; at that point, we were done with what we could do by assisting the internal investigation with the DA,” Scott said. “Brandon had decided to go ahead and resign. … After he resigned, the remaining board members wondered, ‘Why are we recreating the wheel? Why don’t we just unite and become part of that great organization?’”

She does not know how long dissolving Pride, Inc. will take but is happy the organizations are uniting in time for Pride celebrations.

“The next court date for [Honeycutt] is July 10th,” Scott said. “I don’t know what happens after that, and actually, it doesn’t affect us one way or another. ... It’s time for all of us just to move on and move forward and come together. There has been too much separation in the community at times.”

Scott has been using her previous experience working with Pride, Inc. as she serves on Pride Alliance’s entertainment committee.

With the pro bono help of Alex Bliss and Jeri Holmes from Nonprofit Solutions, Pride Alliance was incorporated as a 501(c)(3) nonprofit at the state level and attained a federal tax-exempt status.

“We would not exist without them, and I’m still on the phone with Alex on the daily, asking questions about legal stuff,” Zuniga said. “I can’t even think of all the people that are helping, but it’s a lot of people, a lot of community partners who care about Pride. … Sponsorships don’t always come in the form of money, like Nominee did our entire rebranding and this entire pop-up art gallery for free.”

Nominee, a local branding company, created the organization’s branding and marketing, even launching photo series Faces of Pride, which has become a pop-up gallery at Wreck Room, 2127 NW 39th St.

“They were like, ‘Normally, we get about six months’ notice on something like this, but we’ll make it work,’” Zuniga said. “It’s not the best of circumstances for everyone, but I think people also have that spirit of chipping in. … Another thing that’s pretty cool is that we’re all a real diverse group. We have a lot of contacts in different areas. Like our vice president is Mr. Leather [Bret Streetman]; he’s an attorney for MidFirst Bank. He’s helped us get our accounts set up, and he knows tons of people in different communities that I would never know.”

While some of Pride’s community partners reached out on their own, Zuniga said Pride Alliance members were instrumental in acquiring many others. Rachael Leonhart, Lyric Theatre of Oklahoma group and community engagement coordinator, is on Pride’s entertainment committee.

“One of the things that was a big concern to me was not being able to offer them anything in return except exposure, and I hate that word,” Leonhart said. “I knew it was necessary to pay talent if we wanted quality talent, so I thought about who would be willing to contribute. I’ve got an amazing relationship with Rachel Cope at 84 Hospitality. … She found out I was involved with Pride and said, ‘Let me know how I can help.’”

84 Hospitality Group is one of Pride’s biggest sponsors this year. It is donating money to sponsor the main stage, which will allow Pride to pay all of its performers for the first time ever.

“We’re going to have a few big names, and we’re going to be able to pay even the smaller regional local talent something, even drag queens who’ve never been paid before,” Zuniga said. “84 Hospitality stepped up and gave us money for that main stage because they wanted to see good entertainment. So it’s like, if you want something at Pride, step up and make it happen, and that’s what people have done.”

Luis Miguel Barajas said they attended the first Pride meeting in January, which was encouraging because there was so much diversity, something they are deeply passionate about.

“There was young and old people there, there was people of all colors, the whole spectrum of people,” they said. “AC [Facci], who is nonbinary, was up there, and I also identify as nonbinary – I use all pronouns. Just to see them up there was like, ‘Oh my gosh! This year is making a wave of change, so I want to be part of this.’ … I had spoken at the meeting a couple times on the mic. I was like, ‘I’m taking action. We need people of color. We need young people. We need to make sure all of these people are included.’”

Barajas, who also serves on the entertainment committee, said they are encouraged by Pride Alliance’s focus on inclusion. Urban Pride, which has historically held its own separate events designed for queer people of color, is now hosting events under the Pride Alliance umbrella.

“It’s a big thing, especially in a Midwestern state that is predominantly white,” Barajas said. “Urban Pride comes out of wanting to have Pride that is an intersection between being a person of color and LGBT, which is always hard to celebrate itself because there’s cultural differences.”

Barajas performs as Topatío, which they refer to as a “drag thing” for their unique, nonfeminine aesthetic. They perform on the main stage 9-10 p.m. at Friday’s block party on 39th Street. They will also have shows at 11 p.m. Friday and Saturday at Wreck Room.

“I feel really fortunate to be able to work with someone like Lauren Zuniga because she’s so good at pulling in positive, enthusiastic people,” Leonhart said. “It makes my job easier having a leader like her who is going to pick up the phone if it’s late in the evening. ... There will be time when I say, ‘Lauren, I don’t know about this.’ And she hears me out and she says, ‘I hear where you’re coming from. I’ll take care of it,’ and she always takes care of whatever the concern is. To see someone have that kind of pull through for such a thankless position she’s in right now is inspiring.”