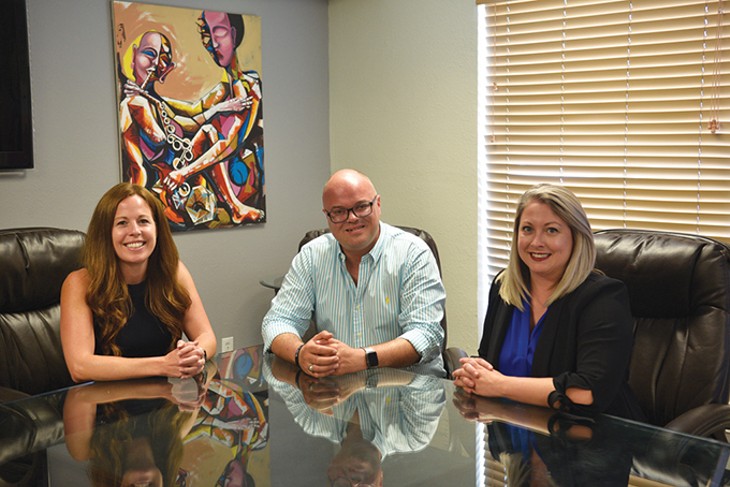 On one hand, Freedom Oklahoma and Women Lead Oklahoma advocate for two distinct constituencies — the former promotes civil engagement in the LGBTQ community while the latter concentrates on those who identify as women.

But the two groups have more in common than they have separate — a shared board of directors and office space, for one. Freedom Oklahoma executive director Troy Stevenson said the two organizations are up against forms of animosity that originate from the same systemic bias.

“It comes from a place of misogyny, and it comes from thinking that men are better than women in society,” Stevenson said.

For that reason, the two groups have found themselves working closely together throughout their relatively brief histories. And when Women Lead was annexed by Freedom Oklahoma’s operating board last year, it seemed like a logical step forward.

“We had been working with them for years,” said Women Lead advisory committee co-chair Lindsey Kanaly, “so it was kind of a natural fit.”

In February, the two groups came even closer together when they moved into a shared office space at 4001 N. Classen Blvd. Freedom Oklahoma previously had a smaller office in the same building while Women Lead moved in from another building farther south on Classen.

While there are other advocacy organizations that exist for women and LGBTQ populations, Women Lead and Freedom Oklahoma are similar in that their main focus is on promoting civic literacy and engagement in those two communities rather than keeping a sole focus on specific policy.

“There were organizations doing direct service and direct political advocacy [when Freedom Oklahoma began],” Stevenson said. “I think people were confused about the difference between talking to legislators and affecting law. I think teaching people to vote and teaching people to be civically engaged is politics, but it’s really public education.”

Women Lead was founded in 2015 by former director Kendra Horn. At the time, there were women’s groups like Planned Parenthood that would advocate for reproductive rights or other specific issues but few that made political education their main concern.

Horn left her role as Women Lead director to run for Oklahoma’s District 5 seat in U.S. Congress. Co-chair Kanaly was one of the women primarily responsible for organizing the Oklahoma City Women’s March at the state Capitol in 2017.

Kasey Greenhaw, the other co-chair of Women Lead’s advisory committee, said the organization is focused on getting women comfortable engaging in civics in their community and getting them out to the polls.

“It is a whole education program designed around empowering women in our communities,” Greenhaw said.

Greenhaw is responsible for organizing Women Lead’s monthly Across the Aisle series, which features prominent Democrat and Republican speakers talking about ways in which they have worked together or compromised. She said the intention of the series is to let the community in on how politics really works.

“When you sit down and have conversations,” she said, “you find out you agree on a lot of things, but so many people see that ‘D’ or that ‘R’ next to their name and then they’re evil people.”

Women Lead also hosts its Trailblazer series the third Friday of every month to showcase how different women in the community have been pioneers in their field. Transgender former police officer and community leader Paula Sophia Schonauer is scheduled to speak at the next event. Kanaly said that event is just one example of the ways in which Freedom Oklahoma and Women Lead’s programming overlaps.

“It’s a nice way to bridge those two communities and show that we are a part of the same,” Kanaly said.

While Freedom Oklahoma and Women Lead share the same board of directors, Women Lead maintains its own operating committee and is its own autonomous organization.

Still, sharing operating budgets, an office space and administrative staff makes the two organizations more efficient and able to spend more of their resources on accomplishing their core missions.

“I don’t know that many other organizations have done it this way before,” Stevenson said.

Greenhaw said the main advantage of officing with Freedom Oklahoma is the chance to see how they run things.

“They’re a more established organization; they have more funding,” she said. “I feel like it’s a learning experience, and hopefully we’ll be able to grow and be as well-known as Freedom Oklahoma is.”

Freedom Oklahoma is no stranger to mergers. In fact, its impetus came from a merger between the Cimarron Alliance and Tulsa-based TEN (The Equality Network), which came together under the Freedom Oklahoma banner in 2015.

“It’s kind of an ongoing situation where we try to make the most efficient use out of the limited funds that are in Oklahoma to do the most good possible,” Stevenson said.