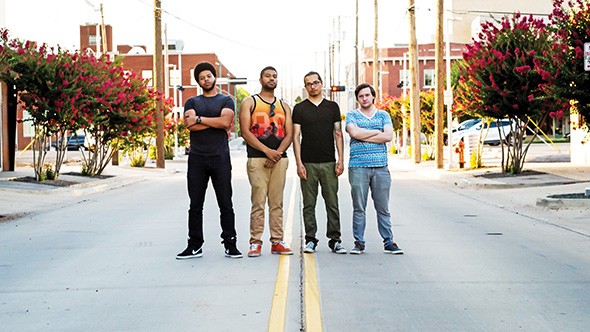 
The music stage is located at the intersection of 39th Street and Pennsylvania Avenue.

Original Flow and The Fervent Route

LCG & the X plays 8 p.m. Friday at Pride Block Party. Lead vocalist Morgan Hartman said she has been going to local Pride events for the past three or four years, but this will be the band’s first time to take the stage at one.

“It means a lot to us for a lot of reasons, personal and just as a band, to get to be a voice and a part of this situation that we’re all kind of involved in anyway in our personal lives,” Hartman said. “It will be nice to connect with that whole scene that we’re already kind of in, to get to be on another level than just attending. It’s a huge honor. I can’t believe it’s even happening. We’re so happy.”

LCG & the X — which also includes guitarist Pili Guarddon Pueyo, bassist Alyssa Lindsey and drummer Caitlin Lindsey — plans to release the single “Peach Boys” in July and is currently mixing a full-length album for a projected September release date. For Pride, Hartman said the band has planned a show with “a lot of colorful outfits and maybe some stage props.” 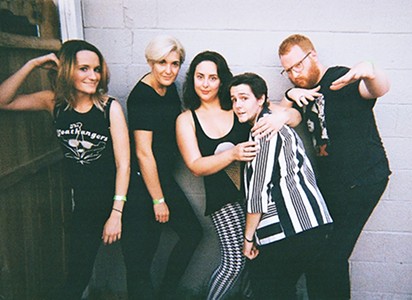 “That might be about it; let everything else kind of speak for itself,” Morgan said. “There’s a lot of people there, and it’s going to be really nerve-wracking but it’s going to be fun. ... We love the scene. We’re going to do our best to make it a really cool performance for all the awesome people that attend this event.”

“We are super excited,” Lynch said. “We’ve got Pride shirts that we just made. They’re our regular Daydrinker logo, but we added a rainbow on there. … We’re going to throw some out to the crowd.”

Lynch released a solo album last year, but she said her backing band — drummer Nick McPherson, bassist Johnney Jones and guitarist BJ Megginson — “adds a whole lot more depth and feeling and emotion” to the music and the full band is planning to release an album later this year. Lynch also appreciates how much more supportive her new band is of events like Pride than some of the musicians she has previously worked with.

“I’ve always been a huge supporter of the LGBTQ community,” Lynch said, “and finding a band that also felt my views so strongly is pretty awesome. … It’s crazy finding those people in Oklahoma when we’re considered to be such, like, a closed-minded state. It’s really nice.”

Lincka, taking the stage 7 p.m. Friday, said being invited to play at Pride Block Party means her songs are reaching listeners in the way she intended them to.

“It’s just extremely inspiring to be asked to perform there,” Lincka said. “It makes me feel like the music that we’ve been doing has spoken to people. … Our music now is just so pro-POC pro-LGBTQ. I want everybody to feel welcomed. … I think the crowd is going to really love what we have for them.”

Her latest album, Blank State of Mind, produced by Rat F!nk (Dan Ashford), was released in April, preceded by the standalone single “Chicana Baby.” Because she wants to promote intersectionality with her music, Lincka was thrilled to learn that local drag queen Shalula performed a routine to the song.

“I think what happens when you’re [a person of color] is you get pegged as just one thing, and it’s difficult for us to be portrayed in many different lights,” Lincka said. “The truth is that we have incredible talent and incredible representation in a lot of intersecting communities. … People don’t really think that we’re out here in these different spectrums. We’re kind of just put in this box. I don’t know why, but I do get it because the way we’re portrayed in the media and the way we’re portrayed on the internet and on TV, it’s a negative light. Still, in 2019, it’s still happening, but really, we’re out here in so many different communities. And I’m just ready to shine a light on the truth of our people. We have so many different Latinos that are gay, that are a part of the LGBT community. … They’re drag queens; they’re performers; they’re artists, singers, dancers. … We are out here, and we are so many different things.”

The lack of representation in many traditional outlets makes Lincka more determined to make outspoken, inclusive music for listeners often left out of the mainstream.

“It’s important for us as artists to showcase our music to people that are being marginalized,” Lincka said. “That’s what we need to do more, and we shouldn’t second-guess ourselves because the more we do it, the more normal accepting it is going to be. I’m all about putting my beliefs, even my political thoughts, personal thoughts, everything on the forefront of what I do because I’ve had a lot of people be so thankful and respectful towards me because of that, because I inspired them to do what they want to do without being scared of what other people are going to say.”

Original Flow and The Fervent Route

Original Flow and The Fervent Route performs 6 p.m. Saturday. Original Flow, aka Christopher G. Acoff, said this will be his first time attending Pride as a performer or a participant.

“I’m excited for it,” Acoff said. “I’m not 100 percent familiar with it, so it’ll be kind of like a culture shock, but I’m going to appreciate everyone being able to celebrate themselves. I think it’s pretty dope.”

Acoff said he and his backing band The Fervent Route — drummer Josh Carpenter, keyboardist Andrew Wood and guitarist Daniel Acuna — plan to release the single “Dreams” next month and an EP “hopefully by the end of summer.” Though this will be the band’s first time at Pride, Acoff said his music will be a good fit and he looks forward to learning from the experience.

“Our message is about sharing love and being able to spread that love throughout the world and allowing people to love themselves,” Acoff said. “So I think this is a dope opportunity to be able to do that to a culture we’re not 100 percent familiar with. I think it will be a great opportunity for our band to gain that awareness a little bit more. … This world is so closed in, and I feel that if people understand how to appreciate themselves, they can appreciate other people too.”