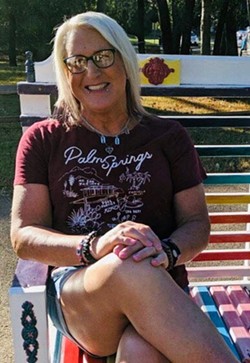 Despite COVID-19 and literal road- blocks due to street enhancements, OKC Pride Inc. will celebrate Pride on 39th Street this month.

The three-day festival runs from noon to midnight Sept. 24-26, culminating with the parade at 4 p.m. Sept. 26.

The COVID-19 pandemic made their 2020 plans impossible, and street enhancements along the city’s LGBTQ+ district delayed this year’s celebrations, which are typically in June. But Pride on 39th organizers hope this year’s event will be one of the best they have ever hosted.

Tessa White, OKC Pride Inc. president, said she was unsure they would be able to pull off a high-caliber Pride this year. The group has been dealing with a pandemic, an ongoing lawsuit involving Oklahoma City Pride Alliance, and recently a restructuring of their own board after the former board president stepped down for personal reasons.

“I knew we were going to have a Pride, but I was skeptical at the level of quality that we were going to be able to have. I didn’t think we had enough time,” she said. “We set our goals very high, and our board of directors and our committee members not only met those goals, but far exceeded them. We are now fully expecting that this is truly going to be the very best Pride event Oklahoma City has ever held on 39th Street.”

The Equality Concert kicks off at 5 p.m. Friday on the main stage with drag performers and talent from the various local gay bars. Headliner Todrick Hall is set to take the stage at 11 p.m. Hall gained popularity after making it to the semi-finals on American Idol and creating viral Youtube videos. Since then, he has appeared on RuPaul’s Drag Race as a choreographer and judge and starred in Broadway’s Kinky Boots.

“The main stage will actually be erected on 39th Street,” White said. “Almost even with Tramps, even towards The Boom a little bit. It’s going to go across 39th Street, and it’s going to be facing east. So 39th Street from that point, all the way to Penn. Avenue, you’re going to have a clear view of the stage.”

There will be another stage in the Angle’s parking lot along with a full bar and several food trucks along the back. Local drag performers, bands, and DJs make up the entertainment throughout the three days.

There will also be a kid’s zone in the parking lot of the Diversity Center.

The street enhancements made to 39th Street District are not complete, but White said they don’t expect construction to interfere in any way.

“The construction company has stayed in close contact with us, and we have been assured that the street will be ready for a festival to take place,” she said.

The parade along 39th Street starts at 4 p.m. Sunday on Classen Blvd. and ends at Youngs Blvd. This year’s parade grand marshals are Donnie Wilson and Miss Diamond Sameek Neal.

White said they have several parade entries, but are hoping to get more.

“We have several parade entries that range from nonprofit, students, commercial, and political entries,” White said. “However, we are really hoping that our community will step up and join us in the parade. It’s kind of tough with COVID right now.”

Pride on 39th will take place as COVID- 19 case numbers continue to rise due to variants. Oklahoma County has high community transmission, according to the Centers for Disease Control COVID- 19 tracker.

White said they plan to take many precautions.

“All of our committee members, all of our volunteers will be COVID vaccinated,” White said. “We would have liked to have put in a mask mandate, however, more than half of our festival is held on city-owned property. We are not allowed to have a mask mandate on city property ... but we are strongly urging everyone to please wear a mask. We are strongly urging everyone who attends to be vaccinated.”

White said OKC Pride Inc. has been collaborating with the Oklahoma City-County Department of Health, which will be at the event providing

HIV and COVID-19 testing, and offering free COVID-19 vaccines from 1-5 p.m. on Saturday.

“It’s absolutely tearing me apart inside. My stomach turns every day for it because if we ever lost one of our community members, I don’t know how I’m ever going to live with myself,” White said. “The safety of our people is of the utmost concern, and if anyone has any type of reservation at all about attending Pride because of health concerns, we would urge them not to attend.”

Vendor booths will also be spaced according to proper social distancing guidelines, White said. The event’s COVID-19 rules will be posted throughout the festival.

“There’s No Place Like Home: Respecting Our Past, Welcoming Our Future” is this year’s theme, coming from suggestions via Facebook. White said that the idea of home can be triggering for LGBTQ+ people, but the theme aims to highlight the importance of affirming places.

“There’s no place like home’ can be like nails on a chalkboard especially for somebody like me. I haven’t talked to my parents in years,” she said. “But it’s referring to our wonderful place in the gay district ... and the chosen family that we have within that district and within the gay, lesbian, trans community.”

White said the second part of the theme is important to reflect on the hardships of the LGBTQ+ community throughout history and the future that is to come.

“Because of the fight and the courage that all of our people had in the past, we are now able to sit here and look forward to a wonderful future where gay, lesbian, trans people have it easier today than they did in the past,” she said. “We look forward to continually having our place maintained in this society.”

This will be the district’s 33rd annual Pride event, but White is actually OKC Pride Inc.’s first transgender president ever.

“It’s been a heartwarming experience,” she said. “I have gotten a tremendous amount of feedback from my trans-gender counterparts that are absolutely thrilled to see one of their own as president of OKC Pride. All board members, committee members, everybody has been very supportive.”

She hopes attendees will feel a similar sense of affirmation when they attend Pride.

“This Pride event is going to be a great way to make new connections. It is also going to serve as an inspiration for those who want to come out and haven’t made that decision yet,” she said.

For more information about Pride on 39th, visit www.prideon39th.com.