In addition to the parade and other events at Pride, Medicann-OK will also be hosting a smoke tent at the festival.

“When we met with them, we were just going to hold a booth,” Nerio said. “But then they were like, ‘Well, how about y’all put a smoke tent up?’ It’s on private property, so we’ll be able to have a smoke tent for patients. And then we’re also holding a patient drive inside the Habana Inn lobby.”

Medicann-OK has already done several patient drives at its dispensary, 8309 NW 39th Expressway, and helped hundreds of patients acquire their licenses, so it is a familiar process for them.

As of June 12, they still had only between 20 and 30 volunteers who have signed up to help and are still welcoming volunteers.

There will be no cannabis available for purchase from Medicann-OK on-site that day, though it will be selling goodie bags.

“We’re doing goodie bags with our logo, some lighters, blunt splitters. I think they’ve got some flavored condoms and some other kind of stuff,” Nerio said. “Those will be up for sale. They’re $10 a bag, but we legally cannot sell product.”

However, patients can bring their own product to consume in the smoke tent at Pride.

Cali Roots will also be represented at Pride.

Like its name says, the vertically integrated dispensary originated in the San Diego area, but the entirety of the company has relocated to participate in the Oklahoma medical cannabis market. 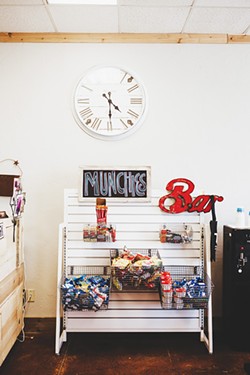 “What kind of inspired us is we — obviously, coming into the industry as a medicinal facility, we didn’t want to just bring in a stoner culture and not help our environment,” manager Tanner Smith said. “We obviously wanted to do something for the community and show that we’re not just from Cali. We’re actually here to help and make a presence for Oklahoma. … We’re really just going out to spread awareness.”

Cali Roots’ Pride booth offers some first-time patient deals and discount passes. Additionally, representatives will be walking around the festival, passing them out.

This is just one of several community events Cali Roots plans to participate in moving forward, including some trash cleanup around Lake Hefner and volunteering for animal shelters.

No Rhyme or Reason Shoppe and Vertica will also be represented at Pride.

Vertica is a high-end dispensary that recently opened its first location in Norman. Another dispensary in north Oklahoma City should be open this month with locations planned for Edmond and Stillwater in the future.

After the Pride parade and festival at 39th St. District, Pot of Gold sponsors the Pride at Lost Lakes Health and Wellness Fest on Sunday.

The event is smoke-friendly and features swimming, vendor booths, a bikini drag show, a mini bikini pose battle and a swimsuit contest with a celebrity judge, food trucks, a margarita shack, three DJs and other activities throughout the day.