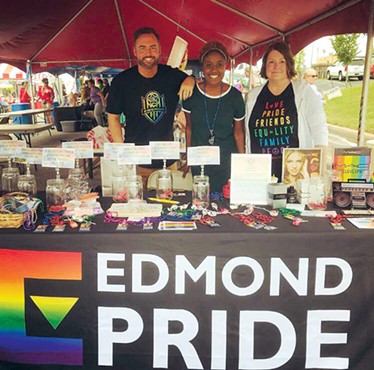 Oct. 20, Hafer Park plays host to Edmond’s first-ever LGBTQ Pride festival. Edmond Pride, an event orchestrated by University of Central Oklahoma’s LGBTQIA+ Faculty Staff Association (FSA) and the Student Alliance for Equality (SAFE), promises activities, performances and vendors friendly and accessible to all. Somewhat of an alternative to the atmosphere of more common Pride parades, Edmond Pride offers a more relaxed and intimate experience with an emphasis on cultural education and understanding.

Since its formation in 2016, LGBTQIA+ FSA considered a kind of event that would empower individuals in the surrounding community. In tandem with UCO’s mission of full-spectrum development, the committee considered how the festival could build upon the students’ curriculum. Johnathan Stephens, UCO’s director of undergraduate admissions and the president of LGBTQIA+ FSA, recalled the components that brought Edmond Pride to light.

“Part of FSA’s mission is to encourage student development and forge a connection,” he said. “We partnered with SAFE as a way of bringing together a big festival and allowing students a chance to experience that process. Given the background much of the faculty and staff have in putting together something like this, we’re able to partner with a student organization and give them the experience of coordinating and working with city officials to bring something like this event to fruition.”

In several ways, Edmond Pride goes against the grain of many Pride events throughout Oklahoma. For example, the festival is limited to a single day for the time being, and no alcohol will be served. Edmond Pride, in many ways, offers a chance to learn about a culture in a calmer setting than louder and more congested parades.

However, this less common approach to a Pride event doesn’t mean Edmond Pride is striving for anything less than empowerment, comfort and common ground. Many Pride events lack a setting for children to experience LGBTQ culture, but Edmond Pride offers inflatables for physical activity and a Drag Queen Story Hour involving content concerned with positive child growth. The festival also features a myriad of performers and speakers headlined by Trinity “The Tuck” Taylor of RuPaul’s Drag Race.

Above all else, Edmond Pride is concerned with the education the festival can provide, the ability to eliminate stigma while encouraging understanding within a welcoming environment.

“The biggest factor of the festival is its use as a community resource,” Stephens said. “We wanted to build something that would be valuable for everyone, not just a subset of individuals. Many people have a lot of questions, like ‘Why are there so many letters in LGBTQ?’ and ‘What does Q mean?’ We’re going to have several resources, like signs in English and Spanish that specify what gay, lesbian and transgender mean.”

“This is the first LGBTQ-centric festival Edmond has ever hosted,” Stephens said. “The process of creating Edmond Pride has been a chance to bring many community members forward and expose a lot of people to LGBTQ culture. Even in Edmond, there are so many people that feel their community is underrepresented or under-celebrated, and we’ve gotten many positive responses from people who are excited to see this happen in the city they live in.”

Given the emergence of Norman’s first Pride parade earlier this year, Edmond Pride appears to be on the cusp of a growing trend throughout Oklahoma. Though Tulsa and Oklahoma City have hosted large Pride events for several years, they can at times feel limited.

“I think it’s important to remember many people aren’t able to attend Pride events for a number of reasons,” Stephens said. “There’s also a sense of pride, appropriately, that emerges when your own city is hosting the event geared towards you and those you love and support. … Edmond Pride is a great way to introduce yourself to pride that’s not going to overstimulate your senses.”

Edmond Pride offers accommodations for nearly every need: nursing stations, sign language interpreters and alcoves for those in need of a quieter space. Additionally, any location further from the main stage will still be able to experience Edmond Pride to the fullest through several activities.

Stephens feels the scope of Edmond Pride might broaden in the future, but its mission remains consistent.

“We’re hoping the first event goes well enough that people who were initially curious yet scared or intimidated now know that there are people here that are accepting and accessible,” Stephens said. “We want to focus on the community and neighborly love for one another.”

Ultimately, Edmond Pride is an event designed to foster empowerment through celebration and education.

“It wasn’t a long time ago we experienced the legalization of marriage equality,” Stephens said. “As a nation, we’re becoming more supportive of the LGBTQ community, and it’s important that to some extent, people can be their true, authentic selves. People who are struggling need to see this support.”