Oklahoma City’s LGBTQ+ community reckons with its past while dealing with modern concerns. 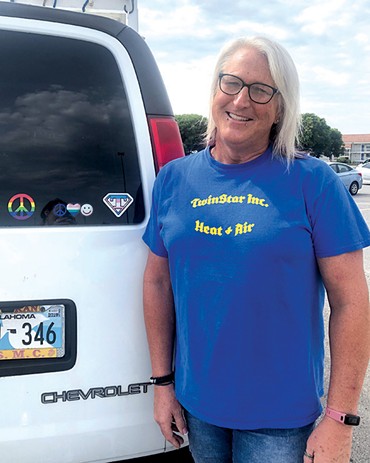 Much of the history of the LGBTQ+ community centers on its relationship with law enforcement. This year marks the 50th anniversary of the Stonewall riots, which took place in New York and are widely regarded as the birth of the modern LGBTQ+ rights movement.

Stonewall Inn was a bar for members of the LGBTQ+ community during the mid-20th century and was frequently raided by police, who would charge patrons with masquerading — meant to target transgender people wearing clothing not typical of their birth sex — indecent exposure or other vague misdemeanors.

Tessa White served as a member of law enforcement in New Hampshire for 20 years before retiring as a detective sergeant in 2008. Now, she lives in Oklahoma City and is an active member of the LGBTQ+ community.

“There were times when [LGBTQ+ people] would come in, possibly complaining about somebody assaulting them, and the officer takes the report and says, ‘Look. We don’t have time for this. You’re never going to get a conviction anyway, so just try to stay out of this person’s way,’ instead of treating them like a citizen and saying, ‘Let’s go ahead and file a report, do an investigation and be professional about it,’” White said.

Lauren Zuniga, Oklahoma City Pride Alliance president, said she wanted to focus on honoring LGBTQ+ history and educating more people. She hopes that people attending will learn about the history of the LGBTQ+ community locally and nationally.

Oklahoma’s LGBTQ+ community, as is the case with much of the Midwest, is often overlooked in favor of places such as New York City or California. But the LGBTQ+ community has existed in Oklahoma City since its very foundation, said Aaron Bachhofer, associate dean of social sciences at Rose State University.

Bachhofer wrote in his dissertation that Oklahoma has had several distinct areas that served as meeting places for the LGBTQ+ community.

The corner of Santa Fe and Sheridan avenues — at the time called Grand Avenue — was known at one point as Hell’s Half Acre due to the amount of taboo activity that took place there.

“Even when Grand Avenue became a central thoroughfare in a bustling downtown Oklahoma City after World War II, it was still home to some of the most notorious nightspots in the city, gay and straight,” Bachhofer wrote. “This was an environment where residents expressed non-normative behavior more openly, if only slightly so; a place where alternative sexualities might be exhibited with little notice.”

“Make no mistake,” he said. “Oklahoma City has always had a queer presence. The LGBTQ+ community in OKC certainly has made tremendous gains over the last 20 years or so. However, the roots of that success extend back into the 1940s and 1950s when brave men and women lived their truths, opened and patronized bars dedicated to their visibility and fought back against harassment in a myriad of ways.”

Angles, a now closed LGBTQ+ nightclub, had so many run-ins with local law enforcement that the owner of the bar at the time filed a federal lawsuit against Oklahoma City in 1983. The suit was settled outside of court, with the city council agreeing to pay the owners of Angles $1 in damages and nearly $29,000 in legal fees. The settlement also established an injunction against OKC police to respect the civil rights of Angles patrons and employees and undergo sensitivity training.

Health care can also be fraught for LGBTQ+ people, whether it concerns treatment for HIV, gender reassignment surgery or even legal next of kin. But Oklahoma’s LGBTQ+ community has made progress in recent years when it comes to finding affirming and accessible health care options that cater to their needs.

“I got my doctoral degree at Indiana University, and then I specifically came to Oklahoma so that I could do some work within a rural community,” Hubach said. “When we think about LGBTQ health in general, a lot of the research comes out of major metropolitan cities, what I call the bicoastals: California, New York, Atlanta, maybe up in Chicago or Miami. But we really overlook some of these other states like Oklahoma.”

Hubach said that  lack of trust between doctors and patients can frequently lead to inadequate care.

“[Members of the LGBTQ community] were less likely to disclose, and most of that was attributed to the fact that individuals felt that if they disclosed to their physician, something about their relationship would change,” Hubach said. “The big, kind of, call out to the medical community is, How do we create inclusive and welcoming environments that allow for individuals to feel safe and to be open and honest with their providers?”

Even so, Hubach sees this issue as steadily moving in the right direction. In much the same way that the underlying culture of law enforcement is shifting toward inclusiveness, he said the culture of the medical community will have to change as well.

“Behavior change is difficult, and it’s often short-lived,” Hubach said. “If we want to exercise, many people say, ‘I don’t want to do it,’ or if we change your behavior, maybe it’s the beginning of the year. Some maybe last until February. You need conducive environments that support that. Ultimately, we need legislatures that are receptive, proactive and that want to create environments that are open and welcoming to all Oklahomans. … We all play a role when it comes to health, and LGBTQ health is just the health of everyone.”