Drag and burlesque performers celebrate the legends and rebels of Pride’s past and present. 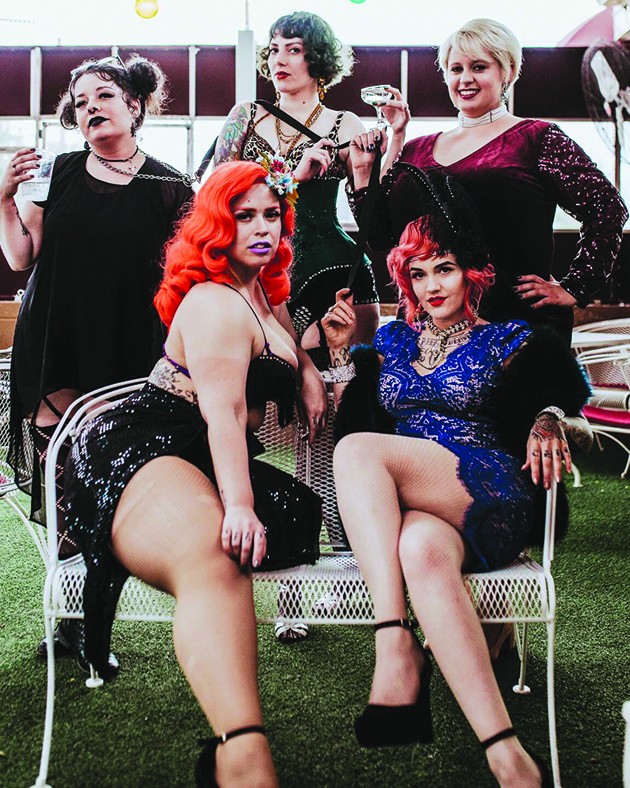 “My persona kind of mixes those two things together,” Yoshi said. “So Yoshi as a performer is just really sexual; he has a strong sexual energy with the females that he encounters. … I’m definitely going to go out there and be as wild as I can be within my realm of being.”

“The first time I went out there, to me, it was terrible,” Yoshi said. “Everybody else said it wasn’t, but I felt that it was terrible. I had no makeup on; I had no beard or nothing. I just went out there and danced, and then after that, I started learning more about the drag king culture; and from there, as I developed, I got better and better.”

Yoshi thinks Matrix-Gritte, who was among the first drag kings Yoshi ever saw perform, is both a legend and a rebel.

“He’s very on the edge,” Yoshi said. “He doesn’t care what anybody thinks, and it’s just amazing to watch.”

Matrix-Gritte, who hosts the monthly shows The Menagerie and Rebels and Royals at Frankie’s, 2807 NW 36th St., said he was also anxious about his first performance, which happened at the Wreck Room about 18 years ago and involved a bloody stuffed rabbit and a pair of jumper cables.

“I was so nervous,” Matrix-Gritte said. “I was like, ‘I can’t do this!’ I just wanted to puke everywhere.”

Now he compares drag to a form of therapy.

“It’s a way to express myself in a fashion, express whatever emotions or whatever’s going on in my life,” Matrix-Gritte said. “It’s a way that I can internally cope with life events, whatever they may be, whether they’re good, bad, sad or somewhere in the middle.”

Inspired by musicians Marilyn Manson and The Smashing Pumpkins’ Billy Corgan, Matrix-Gritte’s goal as a performer is to translate his experiences into art that draws a reaction, positive or negative, from the audience.

“I just wanted to make people feel something or make people have an opinion and make people think about life or think about their own lives,” Matrix-Gritte said, “because I feel like, as humans, we spend so much time running from ourselves. … And you can run all day long from internal fears or whatever those things are that you’re afraid to face, but you’re never going to get away from them until you really sit down with yourself and look at what makes you happy, what doesn’t, and what is acceptable and what’s not acceptable and whatever those rules are to you and make those boundaries accordingly. ... You don’t have to be this person that was born in some box and continue to reside in that box because you’re the only you that you have, and if you look at yourself in the mirror and you’re not happy with what you see, you’ve gotta do something different, dude.”

Bebe Adams, who began performing in drag shows at the Wreck Room about 21 years ago, just before her 16th birthday, is scheduled to perform 8 p.m. Saturday in the Stonewall Tribute on the Main Stage, which also features Maria Isabel, Taylor Bryans, Che Lucci, Renee Hilton and Sonja Martinez.

“It’s kind of a tribute to the older ones that have kind of paved the way for our community and the gay community in general,” Adams said.

The show will honor the history of Pride both nationally and locally. Though much focus in recent years is given to parades and other festivities, Adams said the roots of Pride are riots and protests in demand of equal rights.

“People think of it as a party, but it actually was a fight,” Adams said, “and we’re still fighting.”

The importance and popularity of the LGBTQ+ friendly bars along the 39th Street strip when Adams first began performing is hard to explain to younger performers now. Though people used to line up around the block for shows at since-closed Wreck Room and Sisters (where Phoenix Rising now stands), they now have more options thanks to wider-spread acceptance throughout the city and dating apps that make it easier to meet people. As she has gotten older, Adams said she thinks her own role in the community is evolving as well.

“Back when I was younger, it was all about the shows and the glamour,” Adams said. “Now I really think it’s about the community as a whole, and the more charity I do, the more I see that.”

She wants her legacy to be based on performances at events like Martinez’s annual Christmas AIDS Benefit, a fundraiser for The Winds House, a nonprofit transitional program for people with AIDS who are experiencing homelessness. Adams described the evening, held at The Copa nightclub, as the “most magical night of the year.”

“That night just reminds me every year of how much more work that I need to do and could be doing for the community,” Adams said. “The mood in there and the feeling in there is something you just can’t explain unless you’re a part of it.”

Dust Bowl Dolls Burlesque — featuring Panhandle Perle, Misty Snatch, Cat Carter, Rai of Sunshine, Lucy Cannons, Scotch Rocket, Gigi, Mariah Webb, Cha Cha Nova and Jeannie Jiggles — are scheduled to make their third appearance at OKC Pride 10 p.m. Saturday. In an email interview, the Dolls see Pride as an opportunity to “spread love across the board” with “an overall mission to be seen, heard, respected and loved for every difference you may have.”

“There’s such a gradation of how love can be expressed,” the Dolls wrote in a collective response, “and the rainbow flag that represents Pride is such a perfect way to represent that.”

Though legends and rebels are both important in Pride’s past and future, Yoshi said it is possible to be a legend without being on the edge of society. Just being an active part of the LGBTQ+ community can be enough to make a difference.

“You don’t necessarily have to push the envelope to be recognized for your contribution to our community,” Yoshi said. “You can further what we already have going on and make it that much better.”