The artists and creative team with Factory Obscura are busy working on the second phase of its Mix-Tape installation that debuts Sept. 21, but that is not stopping it from its biggest solstice party yet.

Summer Solstice Block Party held outside Factory Obscura, 25 NW Ninth St., is a three-day event that begins 7:45 p.m. Friday with a dramatic March of the Sun King performance that blends visual artists, musicians, dancers and performers and is inspired by the Beatles’ Abbey Road song “Here Comes the Sun” and ends with a literal passing of the torch to kick off festivities for Pride Weekend in Oklahoma City.

Oklahoma City Pride Alliance and Freedom Oklahoma are among sponsors for the block party that shuts down Ninth Street to place a skating rink in the road that serves as the anchor for all three days of activities. Factory Obscura is selling Pride T-shirts with proceeds that will be split between OKC Pride Alliance and Freedom Oklahoma after their costs are recouped. The skating rink is free, and skates are provided.

“We want to make sure we are creating a community and world where we can all be safe and who we are,” Greenman said. “We want everyone to feel welcome. This is just a step in the process to fulfill that future process.”

Factory Obscura typically plans event and installation parties around solstices and equinoxes. Last year’s Beyond exhibit held a Halloween-themed fall equinox party, but the team was busy working on that installation during the summer solstice.

Friday’s festivities last until 1 a.m. and also include DJ Carte Blanche, aura photography, projection art on the front windows of the Factory Obscura building and an appearance by Wondervan Pops popsicle van.

Access to guest artist The Flaming Lips’ interactive installation The King’s Mouth, which is like an immersive kaleidoscope set to music, is open all weekend, as is the Mix-Tape gift shop, which features new items for the block party and Pride Weekend. The giant interactive boom box on the exterior of the building continues with 24/7 access. 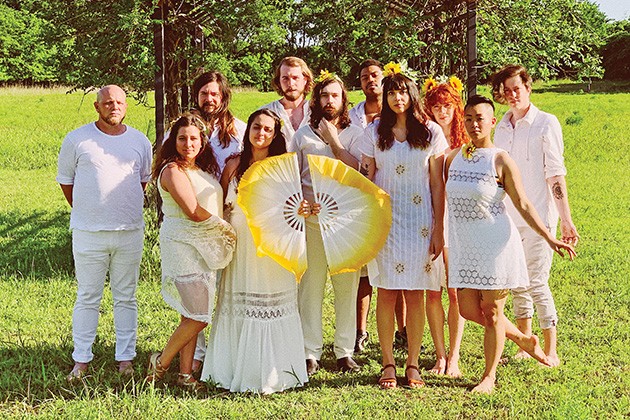 The March of the Sun King builds off last year’s mutli-disciplinary performance that sold out all of its shows in conjunction with the Beyond installation. Oklahoma City band The So Help Me’s are working with dancers, singers and other musicians for another performance. The March of the Sun King includes audience participation and leads spectators on a procession in Automobile Alley before kicking off the block party and opening the skating rink.

“The participation from the community takes everything over the top,” Greenman said. “They’re the magical component.”

Even as Factory Obscura is working on its second phase of Mix-Tape that will expand its footprint to 6,000 square feet, its founders said they feel emboldened to take on more projects as they get increased support from the city.

“Things are changing in Oklahoma City and lots of cities,” said co-founder Kelsey Karper. “The communities are starting to recognize the value that arts and cultures brings economically, socially and culturally. I think in the past, it’s been more of an anecdotal thing — ‘Oh, it’s nice to have those things,’ — but now there is recognition of those things for a community. People outside of the arts and culture community are recognizing it in a way that people inside that community have known forever.”

“I think the world is changing, the tides are turning and we’re hitting a tipping point,” Greenman said. “I think we’re ready for a future that is positive, inclusive and real and sustainable. It feels like we’re building that momentum to that point.”

Following the conclusion of Saturday’s Pride festival, the block party picks back up at 6 p.m. The Future of Sound session combines pop artist Lincka with hip-hop artist LTZ and is a collaboration sponsored by Tower Theatre at 6:45 p.m.

Local poets read at a Poetry and Chill session beginning at 8 p.m. The western alleyway by Factory Obscura has been turned into Glow Alley and features a black-light runway, glow-in-the-dark body painting by Factory Obscura artists, LED flow artists, hula-hoopers and more and also begins at 8 p.m.

“We’re encouraging the community to come and light things up on your own, dress up and wear lots of colors,” Greenman said.

The block party concludes Sunday with a family fun day that kicks off with morning yoga led by YogaLab at 11 a.m. In addition to the skating rink, there are tie-dye stations to which guests can bring their own clothing to color or buy blank shirts for $5-$10. Sunday also includes face painting and henna tattoos and an appearance by MVP Photo Booth.

“We want to show Oklahoma, and quite frankly the rest of the country, that there is stuff happening in Oklahoma; it’s not boring,” Karper said. “There are fun people and interesting things.”