A record number of candidates file for federal, state and judicial office, but does that mean competitive elections? 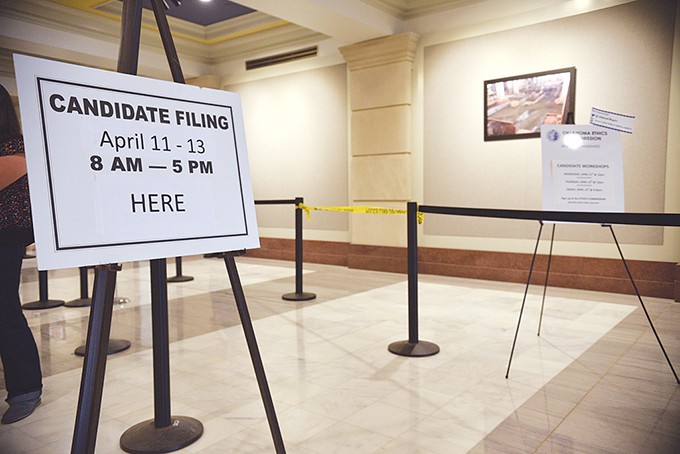 An unprecedented number of Oklahomans are running for office, from the U.S. House of Representatives and governor to state Legislature and local district attorney posts. In total, 794 candidates threw their hats into the ring during candidate filing April 11-13 at the state Capitol.

This year’s candidate filing came on the heels of a historic nine-day teacher walkout fueled by years of budget cuts to public education. Additionally, problems with the state budget persist despite a historic vote on a $447 million revenue package in March. For many first-time candidates, funding classroom education and correcting the state’s fiscal troubles are top priorities.

With education and the state budget weighing heavily on voters’ minds, House and Senate seats are a battleground. But in much of the Oklahoma City metro, races really aren’t much of a race.

“Overall, it is good news that we’ve had a high number of candidates,” said James Davenport, a political science professor at Rose State College who tracks and studies state politics. “On the other hand, the distribution of candidates doesn’t seem to be one in which we are seeing competitiveness increase in a meaningful way.”

Out of 32 House seats in the Oklahoma City metro, seven seats went uncontested with the incumbents automatically receiving another two-year term. All seven were Democratic wins. On the Senate side, of the seven Senate seats for Oklahoma County, two were settled in candidate filing without a race.

Some metro legislative districts, which are heavy in one-sided partisan makeup, attract an overwhelming number of candidates for the primary. For instance, 12 Republicans are running in House District 82, which is an open seat, as Rep. Kevin Calvey is term-limited. The district, which has never been held by a Democrat, encompasses parts of northwest Oklahoma City and Edmond. Democrat challenger Oraynab Jwayyed will face the winner of the Republican primary in November.

In some cases, nobody from the minority party even tries. In House District 99, which includes portions of urban northeast Oklahoma City and northwest Oklahoma City, there are no GOP challengers in a district that strongly favors Democrats. Five Democrats are vying to win the seat in the primary. House District 99 is an open seat, as Democrat Rep. George Young is running for Senate District 48, where he faces a primary opponent in Christine Byrd. Willard Linzy, a Republican, advanced to the general election.

“While we have a lot of candidates running, a lot of them seem to be running against each other in primaries as opposed to running against people in the general election,” Davenport said. “In one sense, that means it will be a competitive primary. There are a lot of races where you only have one Republican and one Democrat running.”


Where are the third-party candidates?

Typically in Oklahoma, when it’s time to cast ballots in the general elections, voters are left with two candidates —one representing the Democratic and one the Republican Party — from which to choose. In 2016, the Libertarian Party of Oklahoma gained ballot access after a signature petition. With 2016 presidential candidate Gary Johnson earning six percent of the votes in Oklahoma, Libertarians maintained ballot access for 2018.

After fielding seven legislative candidates in the Oklahoma City metro in 2016, party members hoped to increase Libertarian representation in elections. In 2017, state lawmakers passed Senate Bill 323, which called for increasing the filing fees to run for state and federal offices.

“I had hopes that we would have more people who would run, but the filing fee is a stumbling block for many,” said Chris Powell, a former chairman of the state party and one of three Libertarians running for governor. “The two establishment parties have people with deep pockets that can go around and get campaign money to pay for filing fees. We don’t have those same kinds of resources.”

Fourteen Libertarians and 23 independents filed for office during candidate filing period, according to the Oklahoma State Election Board.

Powell said that if filing fees stayed at 2016 levels, more Libertarians and independents would be running in 2018. There are no Libertarians running for Senate.

“The voters miss out because they don’t have other choices,” said Powell, a Bethany resident. “Having a more vibrant political environment with more voices speaking, I think helps everybody. That’s what democracy is about. When you put up a barrier to participation and it shuts out a group like us, the Libertarian Party, those are voices that are not heard.”

There are a handful of crowded and competitive primaries worth watching this June. One is Senate District 30, where seven Republicans are seeking the seat most recently held by David Holt, who now serves as Oklahoma City mayor. Those seven are Lori Callahan, Jeffrey Cartmell, Erick W. Harris, Tim Haws, Eric Roberts, John Symcox and Evan Vincent. Several of the candidates began their campaigns months ago.

While Senate District 30 has traditionally been a Republican stronghold, parts of the district overlap House District 85 and 87 that flipped from red to blue in recent elections. Julia Kirt and Larry Dean Buss are the Democrats in the race.

In one of the metro’s most southern districts, House District 20, Rep. Bobby Cleveland, R-Slaughterville, faces five Republican primary challengers. Cleveland is a conservative who cast a “no” vote against House Bill 1010xx, the recent revenue bill that will fund teacher pay raises. In 2017, Cleveland authored an amendment to divert money from civil asset forfeiture seizures to contribute to the construction of a border wall between the United States and Mexico.

Besides Cleveland, the Republicans in the race are Sherrie Conley, Delene Gilbert, Anthony Mackey, Jimmy Smith and Tina Swayze. Donald Cole Gallup, a Libertarian, and Steve Jarman, a Democrat, move on to the November ballot.

Primary elections are set for June 26, with run-off primaries on Aug. 28. The general election is Nov. 6.