Oklahoma Shakespeare in the Park examines the effort to save Shakespeare’s work in The Book of Will. 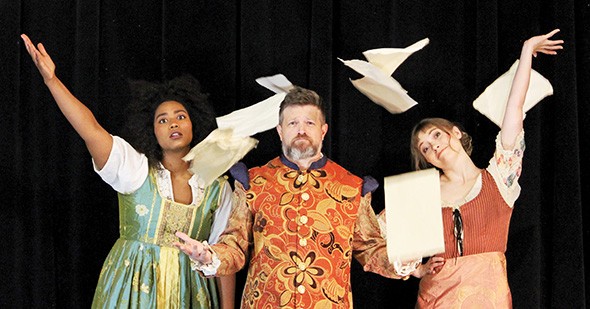 The Book of Will

“To be, or not to be,” said the tragically conflicted Prince of Denmark. “Aye, there’s the point. To die, to sleep, is that all?”

Or at least that is what he says in the version of Hamlet seen by three of the protagonists in Lauren Gunderson’s The Book of Will, presented Thursday-Aug. 13 at Oklahoma Shakespeare in the Park, 2920 Paseo St.

Tyler Woods, managing director of Oklahoma Shakespeare, said the “really terrible production of a pirated version of Hamlet” staged at the beginning of The Book of Will establishes the stakes for its heroes Richard Burbage (played by Woods), Henry Condell (Wil Rogers) and John Heminges (Shawn Churchman). As actors and shareholders in William Shakespeare’s Globe Theatre and close friends of the playwright, the three are appalled to see that in 1619, just three years after the Bard’s death, his works are already being mangled and ripped off and run the risk of being forgotten completely. Following a brief snippet of the bootleg Hamlet, Burbage, Condell and Heminges commiserate over beers at the Globe Tap House. Though “they have great fun at that pirated copy’s expense,” their merriment has a serious undertone, Woods said. Shakespeare died in 1616 at the age of 52, and his friends, who fear they are not far behind, worry that his actual words and works will be lost with them.

“It was basically legal — in fact it was very common practice — for anyone to go steal someone’s play and then put on their own version of it, and there’s no copyright that protects the author’s work,” Woods said. “[Printers] would send these boys to the theater who would sit there in the audience and try to write down everything the actor said. And then those boys would go back to the print shops and hand it over. And they would type-set it and print it, and the minute they did that, that printer owned that play.”

The threat of some of the most influential works in English literature being forgotten to time becomes even more serious in the next scene.

"They were working theater artists trying to run the Globe Theatre in the middle of theater closures, plagues,
riots, you name it."
— Tyler Woods tweet this

“Since it happened 400 years ago, it’s not, I guess, too much of a spoiler,” Woods said, “but Burbage dies in the second scene … and what goes with him are all the plays because he had them in his head. These were men who remembered all the plays and learned 35 to 40 plays at a time in their heads. They would perform on a daily basis, and so when he goes, what goes with him is the history of the real Hamlet, the way that it’s supposed to be done. And so John and Henry, the two sort of main lead characters in the play, realize, ‘Oh boy. We better do something about this,’ and so they quickly start a campaign to collect his works and compile them into what we now know as the First Folio of Shakespeare’s works.”

Even before assuming responsibility for the future of theater, Condell and Heminges were already leading complicated lives full of obstacles as actors and theater managers in the 17th century.

“They were working theater artists trying to run the Globe Theatre in the middle of theater closures, plagues, riots, you name it,” Woods said. “It wasn’t exactly easy to do what they did, and here they are, basically taking on a moonlight gig. They had to collect it, too. That’s the amazing thing. It wasn’t even like they had these plays written down. They had to go search them out.  … You can see the sort of toll it takes on the home life of these two men as they try and salvage their friend’s work.”

“I posit that the women that accompanied these men, their wives and daughters, were just as interesting as they were,” Gunderson said. “So now we have twice as many fabulous and interesting people.” 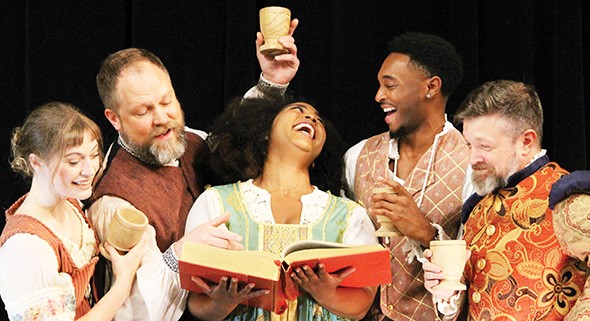 Finding the humanity in historical figures is “where Gunderson really shines,” Woods said.

“She writes, I think, characters that are very real, human and down to earth, and then she chooses orbiting characters, these planetary characters like Ben Johnson, the poet laureate of England, or Richard Burbage, this famous actor, and sort of has them revolve around the play in this almost otherworldly fashion to where they kind of dip in and out of scenes and give you a flavor of the time.”

Though we all know the eventual outcome of the protagonists’ quest to preserve Shakespeare’s works, their motivations and methods provide The Book of Will’s drama and ultimate meaning, Woods said.

“Just imagine what would have been lost,” Woods said, “had this small group of people 400 years ago decided, ‘You know what? It’s not worth going through the trouble. Let’s just let it go.’ … So it’s sort of an homage to not just really printing a book or preserving one person’s work. It’s sort of the idea of, ‘What is worth saving? What in the human experience is worth cherishing and holding on to?’ ...  Larger than just the publishing of one book, I think it’s the preserving of our own humanity.”

On Shakespeare Unlimited, Gunderson pointed out that, while we know their attempt will be successful, Heminges and Condell did not.

“I realized that this could be one big metaphor for loss and legacy, doing something when we don’t actually know what will become of this venture or this effort,” Gunderson said. “They believed in the power of story and poetry, and of course their work has journeyed across centuries to us right now, which I think would delight and surprise them, but also, probably, part of them would have known. Yeah, these plays were that good.”

Addressing “the great variety of readers” of Shakespeare’s First Folio, Heminges and Condell wrote something similar.

“It is now publique, & you will stand for your priviledges wee know : to read, and censure,” they wrote. “Do so, but buy it first. That doth best commend a Booke. … His wit can no more lie hid, then it could be lost. Reade him, therefore; and againe, and againe.”