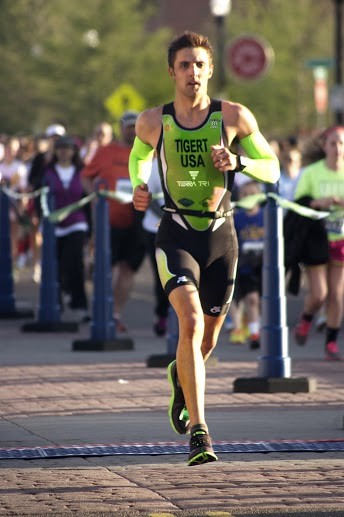 Tigert’s goal is to raise $35,000 for the foundation and to qualify for the Ironman 70.3 World Championship in Austria on Aug. 30.

“It’s definitely a motivation when you look up for a second and see very specifically the families that you’re helping get through their roughest times,” Tigert said. “It makes it easy.”

Founded in 2009, Go Mitch Go honors the memory of Mitchell Graham Whitaker, who died of acute lymphocytic leukemia in 2007. A natural athlete who played baseball, Mitchell’s last words, “Keep fighting,” have become an integral part of the foundation’s philosophy. With chapters in both Oklahoma City and Austin, Texas, Go Mitch Go has raised $900,000 for cancer research since 2007.

The foundation supports athletes who train for endurance sports events, everything from 5K races to Ironman competitions. The athletes, in turn, raise funds that benefit organizations such as The Leukemia & Lymphoma Society and The David H. Koch Center for Integrative Cancer Research at MIT.

Tigert is one of the few pro triathletes in Oklahoma. Born in 1987, he turned to the swim-bike-run sport in high school in Edmond after getting injured while playing football and wrestling.

“They put me in a pool to strengthen my rotator cuffs,” he said. “I never went back. I joined the swim team instead. I just kind of fell in love with the sport.”

For over a decade, Tigert has competed and coached in triathlons. As an amateur, he was the 2007 national runner-up at the Olympic distance (about one-quarter the length of a full, 140-mile triathlon). He turned pro in 2008 and, in 2013, finished in the top 10 in every race he entered. He is also certified as a Level 1 USA Triathlon coach.

Being a pro triathlete often means having a day job or logging long hours to secure sponsorships. Tigert has worked as a bicycle shop mechanic, a makeup artist for Calvin Klein and in graphic design, studying at the University of Central Oklahoma.

At the same time, the sport of triathlon has gained popularity in central Oklahoma, thanks in part to the Redman Triathlon, which was selected to host the International Triathlon Union’s 2016 Long Distance World Championship.

To meet demand for triathlon expertise, in 2013, Tigert — along with girlfriend and former student Emmy Hufnagel — founded Terra Tri, a multi-sport training company that provides coaching for youth, age-group and elite triathletes.

“Dan is very passionate about everything he does,” Hufnagel said. “That’s totally reflected in the way he races, the way he trains and the way he lives.”

This year, Terra Tri was chosen as the official provider of Oklahoma City triathlon training for Go Mitch Go. In July, the Go Mitch Go team will compete in the Tinman Triathlon Hawaii.

Tigert also will compete in the Accenture Ironman 70.3 California Oceanside on March 28 before heading to Galveston, Texas, on April 26 for the Memorial Hermann Ironman 70.3 Texas.