“If you want to wrestle and throw some glitter and spandex on, absolutely,” she said. “You’re welcome to come.” 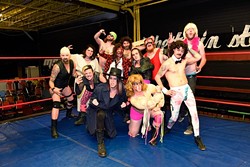 One at a time, they rolled into the ring, a roped-in field of dreams. Ravishing Rick Rude, Big Van Vader, Steve Austin, Randy Savage — pro wrestling legends from across eras joined forces to practice and spar at Mid-South Wrestling Alliance inside Plaza Mayor at the Crossroads.

No crowd assembled that day to watch Vader throw his Hulk-sized frame on Hacksaw Jim Duggan.

But don’t fret. A large and rowdy audience will be on hand when they step into the ring for real during BLOWmania 6 p.m. April 28 at OKC Farmers Public Market, 311 S. Klein Ave.

BLOWmania is the last event of the season for BLOW, a wrestling company started two years ago by Leslie Hensley, who performs under the moniker Balthazar. In the past, BLOW players have adopted personas of ’90s pop culture icons and circus freaks. This time around, they take on some of the most storied characters in the sport’s history.

“What better way to end with a bang than for us to all dress up as our favorite old-school legends?” Hensley said.

She becomes The Ultimate Warrior when she enters the BLOWmania ring.

Hensley said BLOW has grown at an unexpected pace since its first match in April 2014. BLOWmania should be the group’s last match before it attempts to buy its own ring, a place to call home.

“Once we have our own ring, we’ll be able to do a lot more shows,” she said. “Right now, we’re kind of limited to how many shows we can do.” Build it and they will come.

Hensley rarely is content with the status quo. If she itches to try something, she does it.

BLOW originally stood for Balthazar’s Ladies of Wrestling and began as a seven-member, female-only club. They trained for a few months with Mid-South before taking what they learned and going on their own.

Daniel Rueb and Zeke Varnell managed the group, but as events went by, they became more involved in performances. The two trained and were eventually featured in BLOW’s first all-male bout. Since then, more and more people have approached Hensley asking to get involved. She no longer makes any restrictions on who can participate.

“If you want to wrestle and throw some glitter and spandex on, absolutely,” she said. “You’re welcome to come.”

Rueb is living a lifelong dream by stepping into the ring. He has been a die-hard wrestling fan all his life. He will portray Ric Flair at the April 28 event, a choice he made to honor a relative who composed the music Flair used as his personal theme.

Having that kind of tie to the sport bled his fandom into other aspects of life. After winning a pool game, he might lean in for a handshake only to draw back with a loud “Woo!”

“I’ve carried a lot of dumb wrestling tropes around me my whole life,” he said. 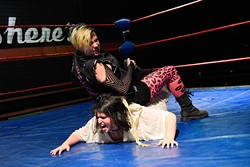 Those who complain about pro wrestling being fake have never prepared for a match. Athletes took turns tumbling on the mat during practice at Mid-South and flung themselves onto the surface with hard and loud thumps.

“They say if you do it right, you hurt; if you do it wrong, you get hurt,” Rueb said. “If you do things right, you know you’re walking into a certain amount of soreness. It’s not a tickle competition.”

To best protect oneself, Hensley said it’s good to learn the basics and make sure to land safely — as safely as possible, anyway.

“We always put that in quotations, ‘land’ safely,” she said. “And don’t die. Try not to kill yourself.”

It’s great advice. And the best way not to die is pretty clear.

“Tuck your chin,” the room of wrestlers said in unison.

Christian Winston, who will portray Bret “Hitman” Hart at the April 28 event, has a personal background in competitive wrestling and judo. BLOW perfectly combines his loves for wrestling and theater.

Each member of BLOW is literally a card-carrying professional. Oklahoma requires all practicing wrestlers to be licensed. A white, pictureless card identifies the holder as a “professional wrestler” in bold, black letters.

The ability to put on a wrestler persona and perform is BLOW’s biggest perk.

Holly Price, Mankind in BLOWmania, said she loves taking personal attributes and attitudes to an extreme level within her character.

“You can be a total dick if you want, or you can be a goddamn hero,” she said.

Part of the fun comes from raucous crowds. Many BLOW wrestlers have backgrounds in theater and more traditional performing arts.

The crowd is an important part of any live show, but in a wrestling environment, there are no rules for etiquette like there would be at a play.

“If there weren’t fans yelling at us in every direction, waving around beer, it wouldn’t be anywhere near as fun,” Price said.

Crowd support has taken BLOW where it is today. Its first match was intended to be a one-off event, but fans demanded more. That demand led Hensley and the others on a journey to fulfill fantasies that once seemed ludicrous.

“We’re all adults,” she said. “We’re all achieving these ridiculous dreams we never thought would be possible. I never thought at 33 I’d be like, ‘I got to go to wrestling practice.’ Every time we’re warming up, I look around and think, ‘This is so ridiculous.’”