Producer Kjarval tells why he made Rudderless 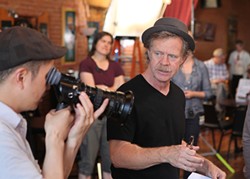 Some people didn’t know what they wanted to be when they were little. Keith Kjarval, producer of the distinctly Oklahoman film Rudderless, was not one of those people.

“I always wanted to be a film producer,” Kjarval said. “I remember telling my mom that’s exactly what I wanted to do when I was 10 or 11.”

Kjarval was born and raised in Chicago and had a blue-collar, middle-class upbringing. Movies were a big part of his childhood.

“My mother and father split up when I was young,” he said. “While my mom went to college, I spent a lot of time at the theater instead of daycare.”

Kjarval said that immersing himself in all those movies — “all these people making believe,” as he described it — made him fall in love with everything about making a production. And that love continued over the course of his life.

“I made home movies,” Kjarval said. “In high school, I directed, starred in and produced short films. It was just something I always knew I loved.”

Kjarval has worked with Macy several times in the past and said that he had a strong feeling that Macy would be a great director.

“He’s done everything one can do as an actor,” Kjarval said. “It’s a completely logical evolution in this third act of his life.”

Macy approached Kjarval about Rudderless on the set of the 2013 film A Single Shot, which Kjarval also produced. Kjarval said that when he and his fellow producers read the script for Rudderless, they all had the same reaction.

“It was the fastest read we had,” Kjarval said. “We were all thoroughly impressed with the way the story unfolds. It just felt like comfortable storytelling.”

Rudderless was written by two Oklahomans — Jeff Robison and Casey Twenter — who collaborated with Macy to produce the final draft.

The film stars Billy Crudup (Big Fish) as Sam, a father struggling with the death of his college-aged son. After hitting rock bottom (drowning his sorrows in booze and living in a boat on Lake Hefner), Sam discovers a prolific log of original music that his son wrote and recorded. Through listening — and eventually playing — his son’s music, Sam finds a bit of peace and the courage to find a place back in the world.

Kjarval noted that the film has a strong musical center as well as a lot of heart and humor.

“There are many doorways through which people can connect with this film,” Kjarval said. “It’s got a remarkable amount of fantastic music. It’s got a mega-talented cast.”

Despite its catchy tunes and genuinely funny moments, Rudderless has a fair deal of somber elements, particularly concerning the death of Sam’s son. Kjarval said the film is more topical than others he has worked on, as it touches on the issue of gun violence.

Kjarval noted that the people of Oklahoma understand what it means to be struck by an act of appalling violence, like the 1995 bombing of the Alfred P. Murrah Federal Building.

“There’s a permeating awareness of what this kind of violence means,” Kjarval said. “There’s also a sense of family. People know people who have been touched by this tragedy.”

Kjarval said that spending time in Oklahoma showed him the enduring spirit of the people who live here.

“We discovered a very resilient people, a strong community,” he said.

Kjarval ultimately dedicated the film to his mother, who passed away during the post-production period of the film. Kjarval said that his mother instilled in him the courage to follow his heart and his passion.

“I don’t think that I’d have any of the audacity to believe that any of this would be possible without her,” Kjarval said. “As proud as I am to be involved in this film, I’m prouder that I could dedicate it to her.”

“At the end of the day, this film is about love,” Kjarval said.