It’s no secret that a large hip-hop scene has developed in Oklahoma City over the last five or 10 years, but often lost in the shuffle are those behind the scenes.

It’s no secret that a large hip-hop scene has developed in Oklahoma City over the last five or 10 years, but often lost in the shuffle are those behind the scenes, those who provide the ever-important instrumentals each rapper rhymes over: the producers.

As is true with rappers, there are far more than a handful of producers trying to make a name for themselves across OKC, most notably Blev, DJ Chips and Ronnie Harris. Blev — aka Courtney Blevins — is the main producer and DJ for increasingly popular rapper Josh Sallee; Harris has worked extensively with OKC staple Jabee; and Chips — born Jeff Kraetzer — produces and DJs for rappers like Beetyman, Frank Black and L.T.Z. They certainly aren’t limited to these roles, each developing his own artistic identity.

Harris is the most seasoned of the above-mentioned instrumental craftsmen, having contributed to the local scene since the early 2000s as both a rapper and a producer.

“I ended up being a producer out of necessity,” he said, “because there wasn’t enough around here to actually suit or tailor what I liked.“

He’s an original member of the Puzzle People collective, which features Jabee, Beetyman, and L.T.Z., among others. He has ventured out and worked with many other artists as well, but Harris still tends to collaborate heavily with the old crew.

“For the most part, it’s more grassroots, just staying home, just helping family and friends around here,” he said.

Chips, another Puzzle People member, began producing back in 2006.

“I kind of just took a plunge, started messing around with a software program called Propellerhead Reason,” he said. “[I] didn’t know what I was doing at all, but I kind of figured it out over time.”

After a while, he linked up with Beetyman and L.T.Z., and later, Frank Black was in the mix too. They all collaborate regularly now, with Chips supplying beats to all three rappers and serving as their DJ.

“The four of us all kind of work in conjunction now,” Chips said, “even though it’s basically three completely different sounds when you listen to their albums.”

Blev’s interest in producing spawned out of distaste for some of the production he would hear when listening to rappers like Lil’ Wayne.

“I started thinking, ‘Man, some of these beats are really wack, like, I think I can do this,’” he said.

Blev has known Sallee since the two were younger, and once Sallee began building a base in OKC, Blevins decided to join. The two have been growing as a unit ever since.

Like Harris and Chips, Blev tends to stick to the local scene, but more recently, he has had some out-of-state success, collaborating with some up-and- coming rappers like Chicago-based Alex Wiley. He was featured on Wiley’s most recent mixtape, Village Party.

Heard is the word 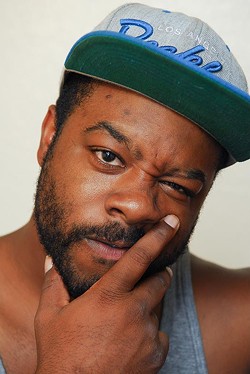 All three producers have developed their own styles, and each has fine- tuned his craft over time. Harris and Chips are both sample-based producers spending a lot of time digging through records, searching for sounds to build off of. This can be a long process, but it allows them to experiment with a lot of different sounds from an infinite number of sources.

Blev has shied away from sample-driven beats, and his approach is pretty random. He typically starts with a melody, and the duration of his creative process varies greatly.

“If something’s really simple and I feel like it goes well, it takes maybe an hour,” he said. “Sometimes it takes a few hours. Sometimes I’ll sit on it for a few days and go back to it.”

One potentially discouraging thing that all producers encounter is rappers hogging the spotlight. However, this doesn’t seem to be a major concern for these guys.

“I would like some recognition, but I don’t really demand it,” Chips said. “It’s not like I go out seeking for other rappers to go hit me up for services. At this point, I’m comfortable with the artists I work with.”

“I’m not even trying to get in the spotlight,” he said. “I just want to be heard.”

Harris, who has seen both sides of the rapper/producer paradigm, has a similar outlook.

“I do it for the love,” he said. “But the spotlight, I can definitely see how some people might feel slighted in a sense. But I mean, if you’re humble in nature anyway, it shouldn’t matter as long as the work’s getting done.”

Rappers also recognize how the spotlight tends to lean in their direction. Dewey Binns, who has worked with all three producers, mentioned that this isn’t entirely fair but that it’s also not intentional.

“I think they should definitely have more of a spotlight. They should get more of the credit,” Binns said. “They do a lot more sometimes than we do.”

Beetyman, who has worked with Harris in addition to Chips, also gave high praise to producers.

“The producer makes or breaks it, man,” he said. “It’s really like the whole backbone of your project, song, whatever it may be.”

Some producers make their living just sending beats to rappers, allowing the rapper to take over from that point. But Blev, Harris and Chips prefer to work closely with rappers on their songs and/ or projects.

“While I know I could probably get my name further out there by handing out beats for someone to rap over, I’d rather work on an idea with them,” Chips said.

Harris has a similar outlook, citing the possibility of conflict when the collaborations are long-distance and mostly handled through email.

“In some of those instances, there can be creative differences in the direction of the song,” he said, “as opposed to working with somebody in studio.”

Blev’s success outside of OKC has forced him to relinquish some of that collaborative input, and he hopes he can be more involved in the future. However, he’s pretty comfortable with where he’s at now.

“I need to grow into being more that way of getting into the studio with people,” he said. “But right now, there’s not anybody I want to get in the studio with besides the people I already work with.”

Both Binns and Beetyman said they prefer developing close relationships with producers.

“It’s definitely very different when you have that relationship with a producer,” Beetyman said. “They can tailor songs to you.”

Like many up-and-coming musicians, Blev, Chips and Harris all have other jobs that help fund their artistic pursuits. Chips is in sales, Blev waits tables and does solo DJ sets and Harris does photography and lays floors.

Each has entertained the idea of doing music full-time, and they are all certainly open to the possibility.

“I’m not really worried about it,” Blev said. “I think I have enough talent and I’m very diverse, so I can do pretty much anything that will help me in the long run.”

Harris probably had the most interesting and uplifting outlook on “making it” as a producer.

“If you’re content and you’re happy, and your bills are paid, and you do what you love,” he said, “then I think you have far beyond made it.”

By that standard, it seems that Blev, Harris and Chips have all made it, but time will tell what the future holds for these talented but sometimes underappreciated instrumental architects.