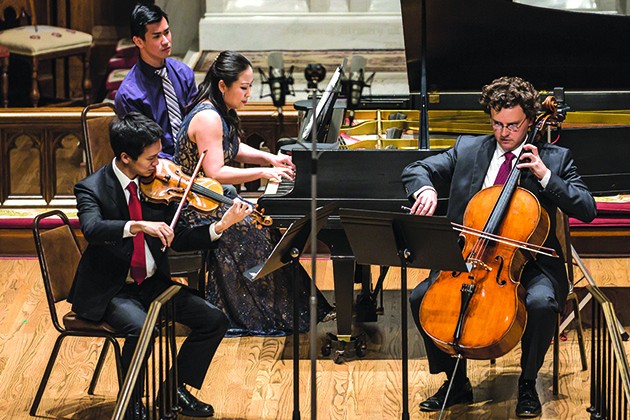 “The idea this year was to focus on programs of music that are smaller in terms of number of personnel but also capture just this sort of interaction and conversational style that exists in chamber music in general,” said co-artistic director and clarinetist Chad Burrow, “pieces that particularly capture that element of communication on an intimate scale.”

“If a concertgoer comes on the first night and goes to all four concerts, they’ll hear expanding dialogues from two to four people and see how chamber music really is, as it’s been described, the most intimate of art forms,” Burrow said. “If we had unlimited concert dates, we could have gone to quintets, sextets. Who knows? Maybe next year, we’ll start with the quintets and go from there.”

The series begins 7:30 p.m. June 6 with an evening of sonatas, pairing a single string or wind instrument with a piano. The program features Francis Poulenc’s “Sonata for Clarinet & Piano”; Johannes Brahms’ “Sonata No. 2 for Viola & Piano in Eb major, Op. 120, No. 2”; and Richard Strauss’ “Sonata for Violin & Piano in Eb major, Op. 18.” The back-and-forth between the two instruments in these works is far from one-sided, Burrow said, and the spirited conversations continue in subsequent concerts as more voices are added.

“Certainly you can see that with two players on the stage,” Burrow said. “I think oftentimes, when one hears a sonata or sees an instrument playing with the piano, immediately people assume that the pianist is some sort of an accompanist, but in fact, most of the time with these sonatas, and certainly in the three that we’re playing, the pianist is an equal partner to the instrumentalist either standing or sitting in front of the piano. So there’s this real conversation and this dialogue that develops between the two instruments, and then you see that expanding outward into trios, and so on. So in a sense, it’s an expanding dialogue from two to four voices.”

"They’ll hear expanding dialogues from two to four people and see how chamber music really is ... the most intimate of art forms."
—Chad Burrow tweet this

In programming each evening, Burrow said the ensemble sought to include a diverse range of music and composers, from well-known to more obscure, classical to contemporary. The second concert, 7:30 p.m. June 8 features Bohuslav Martinů’s “Trio for Flute, Cello & Piano”; Ludwig van Beethoven’s “Sonata for Cello & Piano No. 3 in A major, Op. 69”; and Carl Frühling’s “Trio in A minor for Clarinet, Cello & Piano, Op. 40,” which will conclude the evening.

“He’s sort of one of the unusual ones on the program,” Burrow said of Frühling. “I guess you would describe his music as coming from more of a Viennese background rather than Eastern European. … On the few occasions that I’ve played the piece, people in the audience are usually surprised that they’ve never heard of this composer before because the music is so beautiful, and it sounds an awful lot like Brahms, frankly. That’s the usual reaction that one receives to this piece and also why I put it at the end of the program, because it is a substantial work of about 30 minutes that covers a wide range of emotions and feelings, and it’s incredibly accessible to an audience that likes late 19th-century romantic music.”

The third concert, 4 p.m. June 9, is dedicated to the memory of Mae Ruth Swanson, who died in 2010 and who Burrow called the “matriarch of Oklahoma’s Civic Music Association.”

“Although she never, as far as I know, attended a Brightmusic concert or anything of that nature, she certainly was a patron of the arts in Oklahoma City and was supportive of music in general,” Burrow said. “It’s hard to know, not being able to talk with her, but basically we picked a program that we think is representative of music that she would have enjoyed.”

“We typically think of a concerto as a solo instrument with orchestra, and in this case, you have the three instruments acting essentially as soloists in this kind of chamber music dialogue,” Burrow said. “So it’s really quite interesting. He’s a 20th-century composer that probably is not familiar with many in our audience. I think it’s a very accessible, very interesting and, at times, quite beautiful work.”

The fourth and final concert, 7:30 p.m. June 11, is bookended by Wolfgang Amadeus Mozart’s “Quartet in F major for Oboe, Violin, Viola & Cello, K.370” and Antonín Dvořák’s “Piano Quartet No. 2 for Piano & Strings in Eb major, Op. 87.” Between the two works by world-renowned composers are two types of tangos for clarinet, violin, cello and piano: Argentinian composer Astor Piazzolla’s more traditional “Libertango” and “Oblivion” and American composer John Mackey’s “Breakdown Tango,” which premiered in 2000, making it the most recent work included in the concert series.

“As the title would suggest, he starts with these single elements of the tango and starts to build and put them together, in a sense breaking down all of the constituent parts,” Burrow said. “It’s a very cool piece, and over about 10 minutes, you can really follow his compositional process, and it’s a very rhythmic, very challenging work.”

While Brightmusic always wants concertgoers to go home happy, Burrow said, the ensemble would also like to offer an occasional challenge.

“You want the audience to enjoy the music, but you also, I think at times, want to program things that certainly you hope the audience will enjoy but they may find different, something that they’ve never heard before and something that’s perhaps stretching the ears just a little bit,” Burrow said. “The programs are carefully chosen, for sure, and we want our audience to walk away having a good experience and enjoy the music. But everybody has their own taste, and with any program that has three or four different composers and styles represented, there will be some pieces that our audiences will like better than others. I think that’s always the case. You can do that with old music or new music. I don’t think it’s just a situation where the older music is safer. Sometimes people find the older music not as interesting as some of the newer things. It just depends on the person.”

Single tickets are free-$20, and a festival pass for all four concerts is $50. Visit brightmusic.org.