More than half of the MAPS 4 project proposals have been presented to Oklahoma City Council for consideration. 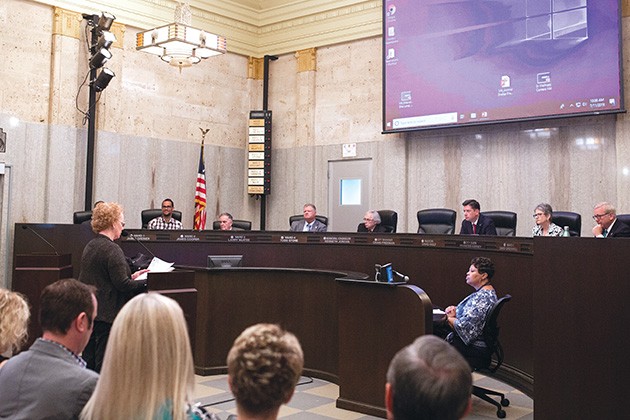 Kim Garrett, president and CEO, gave the presentation on Palomar, which — through collaboration with partner agencies — provides support for victims and children who suffer from trauma due to stalking, domestic violence, sexual assault and child and elder abuse.

In the presentation, Garrett explained that Palomar’s current facility is temporary, and with client number increasing, it is quickly outgrowing it. The proposal is to co-locate and expand services to include 24/7 assistance, job training, a food pantry, comprehensive child services, trauma treatment and therapy and acute medical services.

The new location would be about 80,000 square feet and cost slightly more than $37 million to design, construct and furnish the facility, which would increase Palomar’s capacity by two-thirds. An additional $6.9 million would be necessary if Palomar is relocated out of Midtown, where the current facility stands.

The vision for parks is to improve every neighborhood park in the city, Kupper said. To achieve this, improvements will be made to playground structures, athletic structures, restrooms, furnishings, paths and trees. This would cost $60 million to $80 million and $20 million for operating and maintenance through an investment fund. Mayor David Holt said the investment fund could eventually generate $800,000 a year for maintenance and operations.

Holt suggested river enhancements that included a low water dam, boat landings, an amphitheater and an equestrian park upgrade. The presentation did not include a cost estimate for these improvements.

In terms of youth centers, Kupper said that with aesthetically pleasing facilities and robust programming, they could help curb juvenile crime, which has increased over the years.

He would like to see nicer, more welcoming facilities that can accommodate more comprehensive programming. Kupper said he also wants to focus on underserved areas. He discussed additional programming like life skills, nontraditional gaming, learning labs and nontraditional performing arts.

The goals are to increase the number of people walking, increase the availability of infrastructure, connect neighborhoods to important locations — jobs, public transits, parks, schools, commercial districts — and remove barriers to walking and cycling.

Sidewalks would cost $400,000 to $450,000 per mile and would be prioritized to connect with schools, parks, transportation and downtown.

Another capital improvement is adding three types of bike lanes – protected, dedicated and shared – throughout the city. The cost per mile for bicycle lanes is about $350,000 to $500,000.

Trails would receive improvements, which cost $165 to $270 per mile. Several miles of new trails would also be created, which would cost $1.2 million to $1.6 million per mile.

Leonard Benton, chairman of the board of directors for Freedom Center, presented the proposal for restoration and the creation of Clara Luper Civil Rights Center. The total estimated cost would be $25 million, which would cover various small projects including the restoration, converting a gas station to a visitor center, constructing a new building and developing exhibits and programming.

The goal is to honor Clara Luper through a “Smithsonian Museum-caliber Civil Rights campus” that creates an interactive “legacy journey” from the Freedom Center building to the proposed Clara Luper Civil Rights Center. The campus would stretch about three blocks and include a path, which Benton said zigzags slightly to symbolize the movement’s peaks and valleys.

Mayor Holt expressed some concern about the cost, which he said was $8 million during previous presentations. They plan to keep discussing the dollar amount.

Holt discussed beautification through public art and streetscaping as an economic tool. The proposal focuses on highways and corridors that predate those beautification efforts because they “continue to contribute to a negative impression of our city’s aesthetic appeal.”

Beautification projects would take place at about 10 various city entrance gateways, corridors and bridges. Projects would also include public art or monuments at key intersections, landscaping and trees. This would cost $15 million to $20 million.

The proposal also includes $5 million for an operational fund to create two to three beautification staff positions. This would perpetually fund the staff, which would work with public and private sectors to promote beautification, pursue grants and work with OKC Beautiful for cleanup of public areas.

Tim O’Toole, president and CEO of State Fair Inc., presented the proposal, which contends that replacing the current Jim Norick Arena is inevitable. According to the presentation, the current arena is 54 years old and at the “end of its usable life.”

The proposed arena would include 7,320 seats, first-class patron amenities and a modern concourse. It would be constructed adjacent to the current Jim Norick Arena, which would continue hosting events throughout construction.

The base estimate is $95 million, which Holt said potentially might only be partially funded by MAPS 4. The coliseum is estimated to generate $320 million in direct spending.

The project is a continuation of the original $52 million senior wellness centers project that was a part of MAPS 3, Holt said. David Todd, MAPS program manager, said two of the four original centers have been completed and the other two will be designed soon.

Both completed senior wellness centers offer things like social interaction, exercise, aquatic activities, arts, yoga and a health clinic. The first center had about 6,000 members as of last December, while the second center has about 1,000 since May.

Todd said the proposal was to add two more centers, but Holt said that number could change as they continue the overall MAPS conversation and identify more needs. No dollar amount was presented.

Jonathan Gary, OKC animal welfare superintendent, said the current facility was designed to hold animals for three days before euthanization. He said in the early to mid ’90s, only about 15 percent of animals left the facility alive.

The proposal is to build a new 67,000 square-foot, state-of-the-art shelter that is designed with animal sheltering best practices in mind. The estimated cost is $40 million to $45 million.

The purpose is to improve experience for animals and customers and address operational inefficiencies. In June alone, animal welfare took in 2,502 animals, adopted out almost 600 and euthanized almost 500. The rest were transferred or returned to their owner.

The next meeting is July 31 with presentations on transit, homelessness, Chesapeake Energy Arena and NBA enhancements and Diversion Hub.

The final meeting is Aug. 6 with presentations on mental health, multipurpose stadium, Innovation District, other councilmember projects and a general MAPS 4 overview.