Proposed city ordinance could be challenged in court 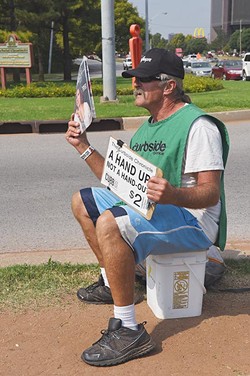 Tuesday, Oklahoma City Council members will consider passing a law to make it illegal for anyone to be in a city median, regardless of whether it’s to panhandle for spare change, collect a charitable donation or sell a product.

Previously proposed as an amendment to abate panhandling at intersections, the ordinance’s authors recently revised it a second time to address public safety: Street medians divide opposing lanes of traffic and are not intended for public gathering, according to city attorney Richard Smith, who presented the ordinance at the Sept. 29 council meeting.

If passed, the mandate would alter a pre-existing motor vehicle and safety ordinance that bans loitering in city street medians.

The original ordinance was proposed last month by councilwoman Meg Salyer, who represents Ward 6. Her plan to curb panhandling was backed by seven council members. They said panhandlers compromise safety when moving into roadways to collect donations. In language introduced at the Sept. 15 meeting, those found soliciting donations, rides, work or other business in medians would face a citation.

Police Chief Bill Citty said medians are the second “riskiest” place in an intersection, as traffic moves toward the median from three different directions. The only thing more dangerous is standing in the roadway.

The police department commander advocated that the ordinance would serve its safety purpose by forcing panhandlers to move elsewhere. Violators would be ticketed and face a maximum penalty of $500 in addition to court costs.

“What is going to happen is (panhandlers) are not going to be in the intersection; they will be on the street corner,” Citty said. “This ordinance wouldn’t significantly limit someone from panhandling. All it does is keep them out of the median.”

Before the council voted unanimously, with Salyer absent, to set a final ordinance hearing on Oct. 13, several homelessness and veterans advocates, religious leaders and citizens spoke against the proposed mandate.

The American Civil Liberties Union (ACLU) of Oklahoma believes the ordinance might prohibit speech. On Oct. 1, the city received a letter from the ACLU requesting leaders redraft the ordinance “by protecting, rather than suppressing, the First Amendment rights of Oklahoma City’s citizens.”

“Should this proposal pass and be enforced as currently contemplated, we anticipate the city will be forced to defend the ordinance against constitutional challenges,” the letter states.

Open to the public