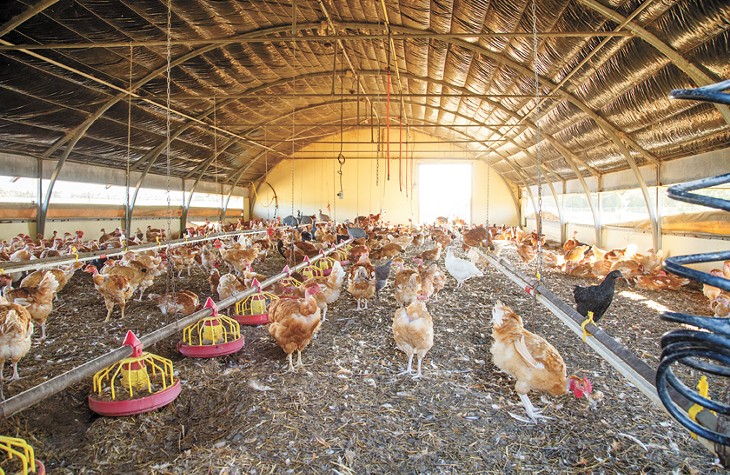 A proposed new rule for labeling organic meats would add more requirements for certification, and while the regulation would provide more open air for livestock and poultry, it could also muddy the definition of “organic” for consumers.

In April, the United States Department of Agriculture (USDA) issued a proposed rule change for organic meats. Under the proposal, organic farmers would be required to follow new quality-of-life requirements such as minimum indoor and outdoor space requirements for poultry and adhere to physical changes in facilities.

For instance, in the case of organic poultry production, facilities would be partially enclosed by netting rather than fully enclosed by solid materials, allowing for greater free movement by the chickens or other poultry.

The USDA reports that organic products account for about 4 percent of total food sales in the United States. Vegetables and fruits comprise the clear majority of the organics market at 43 percent. Meats constitute the smallest sector, tying with condiments at 3 percent. According to the USDA, since implementing organic regulations in 2002, the producers and demand for all organic products has skyrocketed. The market has tripled in that time, and the USDA said in a Nov. 10 statement that more than 22,000 certified organic operations drive more than $43 billion in sales across America.

According to Oklahoma Department of Agriculture, Food and Forestry deputy commissioner Betty Thompson, the proposed changes could create confusion regarding the meaning of “organic” on food labeling.

“It is mainly focused on animal lifestyle and animal welfare,” Thompson said. “I am not opposed to an animal having a comfortable life, but what I don’t want is for consumers to be confused about what organic means. Organic is production without fertilizers, pesticides, antibiotics, any type of pharmaceutical, herbicides, all of that — that is organic. An animal that is being grazed with a comfortable lifestyle is not the definition of organic; that is good animal welfare practices.”

The new rule was met with expected scrutiny from the antiregulatory sectors of Congress. U.S. Sen. Pat Roberts, R-Kansas, deployed snark regarding portions of the rule that call for poultry to be encouraged to go outside during an interview with FarmFutures.com.

“It might be yoga, video games, sports, a gourmet meal or maybe even a strolling violin,” Roberts said.

Hilarity aside, Thompson said the open-air requirements could potentially have negative impacts on the health of poultry. Last year, spread of the H5N2 virus, or avian flu, killed 48.1 million chickens, turkeys and game birds. Spread of the avian flu is partly caused by exposure to other birds’ feces.

“It was devastating,” Thompson said. “But you didn’t see it happening with chickens that weren’t exposed to the outside. But these requirements that would have only netting; it’s a little crude, but you have to think about the fact that a bird dropping is not going to be prevented from coming into a poultry pen by sheer netting.”

Once the USDA opened the rule for public comment, Thompson said the agency received over 5,000 submissions regarding the proposed change. While the new rule was expected to be implemented after the comment period concluded in June, that period was extended into 2017 and is still open so the agency can review and respond.

While the efficacy of the rules is challenged, providers of grass-fed, cruelty-free meat could find it easier to market their products.

“This seems like a pretty good pivot,” said Matthew Burch. “This looks like a good clarification and reframing.”

Burch is longtime owner and founder of local food distributor and retailer Urban Agrarian, which sold locally grown produce to residents, restaurants and businesses for close to a decade from its bohemian shop in the downtown Farmers Market District.

His shop is in the process of closing and remains open a few more weekends into the new year as locals scramble to find a comparable replacement.

The shop sourced and sold pasture-raised, grass-fed beef, much of which could not be technically certified as organic because they are not fed certified organic grains, which Burch said can be prohibitively expensive.

While the new rule does not change the dietary requirements for organic certification, Burch said the proposed rules for habitat could eventually lead to a more inclusive definition of organic for suppliers.

“We’re really dealing with family farms, not industrial operators,” he explained. “We look at purchasing from farms with healthy animals that aren’t being subjected to any preemptive use of antibiotics, growth hormones or concentrated animal feeding operations that have access to the forages that they would have in nature. But the conversation regarding organic chicken or pork or beef has always been a nebulous one.”

Learn more about USDA Organic certification and find data and financial resources at ams.usda.gov. Comment and read more about the proposed changes at regulations.gov.