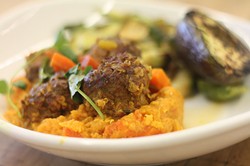 When the subject of eating healthy arises, many of us make that face. You know the one, that crinkled-nose, near-sneer that crawls unbidden across your mouth when the memory of a particularly unpleasant lima bean incident is dredged up from the murky depths of your brain.

That’s a problem, especially in a state where 33.9 percent of adults are obese.

At least one-third of us need to lose weight, but how can we if the thought of eating better makes us cringe? One answer is Provision Kitchen, 6443 Avondale Drive.

Owner Whitney McClendon and executive chef Beth Ann Lyon are focused on making healthy food that tastes as good as it makes you feel. A big part of that is using real food as ingredients, which they ensure by getting as much of it as possible from their own farm.

If you want to know where an ingredient came from, look up. The information is on the wall. When I went in a few weeks ago, the restaurant was carrying garlic, cauliflower, onions, sweet potatoes, broccoli, spinach, sun gold tomatoes, bell peppers, organic eggs, squash, jalapeños and pasture-raised pork from Provision Organic Farm in Oklahoma City.

The restaurant had a build-your-own salad bar but will phase that out in favor of its own composed salads. I was particularly fond of the Out of This World kale salad ($11), which has dressing akin to Caesar on it.

Kale is certainly a buzz-worthy green, but it has rarely been one of my favorites until now. Provision’s kale salad had body but was far easier to eat than most I’ve had. Usually kale has roughly the same mouthfeel as trying to eat a still-living shrub, but this salad was tender. The curly tips of the leaves held on to the dressing made with almonds, garlic and olive oil, which helped the hearty greens go down.

The nuttiness was divine, though it was a tad saltier than I liked. It’s the kind of “simple” salad everyone thinks they can make but can rarely pull off.

Just down the line from the salads is Provision’s hot bar, which changes daily. This is where Lyon’s skills truly shine. She has deep roots in Oklahoma City’s food scene, including stints heading the kitchens at The Coach House, Kitchen No. 324 and The Mule, but I don’t think she has ever looked happier than she does cooking for the hot bar.

On a recent visit, I tried the Moroccan meatballs over a root vegetable mash, but that lineup changes frequently. Hot bar meals are $13.50, including a base, a protein and two fresh sides. The meatballs were nicely spiced with Moroccan seasonings familiar and exotic. The texture was succulent and juicy with a slight crunch from onions added into the beef mixture.

I love meatballs, and these could stand with any of my favorites. They held together when speared with a fork and promptly melted beneath a barrage of teeth, spilling forth a beefy flavor tinged with cumin and coriander. Put them on a sub or over a plate of pasta and they’d be right at home.

The root vegetable mash is a frequent guest on the hot bar and one I’m always happy to see. Sweet potatoes and carrots are roasted and mashed with a touch of seasoning. Add a little salt to amplify the mild sweetness inherent in the root vegetables.

Much as I love Brussels sprouts to be fried or deep-roasted, Provision cooks some of the best in the city, and they do them very simply. Sliced lengthwise, the sprouts are roasted and tossed with a hint of maple syrup. The spices bring a tickle of heat, and the sprouts lack any bitterness.

Provision Kitchen’s initial concept was balanced, heat-and-eat meals in the cooler section. Though I’m smitten with the hot bar, it’s nice to have some options to eat later in the day or the next morning.

Balanced Breakfast ($8) is scrambled organic eggs, roasted sweet potatoes and a big chunk of pork sausage from the farm. Whatever concerns I had about microwaved eggs and sausage disappeared immediately once I started eating the dish. The eggs are supple and taste fresh. The sausage has a good chew and wonderful flavor. The sweet potatoes are cooked nicely, but the texture doesn’t translate quite so well as the pork or eggs.

Sweet potatoes played a prominent role in both heat-and-eat lunch dishes I tried. Ginger-lime salmon ($14) arrived with Brussels sprouts and a Sriracha-mixed sweet potato mash. That was a much more successful use of sweet potatoes, which held onto the spicy chili sauce and made a filling side for the fish.

Fresh-cooked salmon will always have the edge over reheated salmon, but the big portion of fish in the meal was tasty with good moisture. McClendon’s science background is evident in these meals. Not only are they broken down with calorie counts and nutritional info, but she has really found a sweet spot for microwaving complex meals.

The same goes for the buffalo sliders ($13.50). It makes sense to do two smaller burgers instead of a larger one. Buffalo is a pretty lean meat, so the heat needed to warm up the middle of a large burger would likely leave most of the patty too dry. The smaller burgers are cooked through and stay moist with a slightly sweet barbecue sauce and melted cheese.

As long as you’re eating meals that are good for you, why not enjoy a treat? If I didn’t know the gluten-free chocolate chip cookies were gluten-free, I’d never have guessed. The cookies had a slight coconut flavor, but the texture was spot-on and the taste of chocolate came through loud and clear.

If knowing where your food comes from and what’s in it is important to you, Provision Kitchen is a perfect fit. Ditto if you want to eat healthier but don’t want everything to taste like cardboard. It’s little wonder the restaurant has become so popular with athletes and food lovers alike.

What works: The hot bar is a treasure trove of locally sourced clean eats.

What needs work: Prices are high, but you’re paying for quality.

Tip: Any single-serving heat-and-eat meal can be ordered ahead of time as a family-size meal for parents on the go.