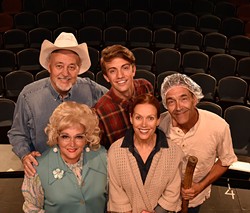 Pryor Rendering is a new, lyrical, coming-of-age musical drama by Frank Schiro and Shawn Churchman, based on the novel by the same name written by Oklahoma author Gary Reed.

“This is actually the third world premiere we will present at CityRep,” said Donald Jordan, founding artistic director at Oklahoma City Repertory Theatre (CityRep). “It’s a complicated process. Whereas staging a play is like learning to drive, staging a world premiere is like building a new car from the ground up.”

Pryor Rendering is the story of a young man coming of age and coming to terms with his sexuality in the 1960s and 1970s in the small Oklahoma town of Pryor.

The content is mature, and the play is recommended for viewers age 16 and older.

“This play is a colorful portrait of small-town Oklahoma characters,” Jordan said.

It is a co-production of CityRep, Tulsa’s American Theatre Company and the University of Oklahoma’s Weitzenhoffer School of Musical Theatre.

CityRep also brought together a stellar cast and artistic team for the project.

Between them all, they are veterans of 13 Broadway shows.

“The story, which is not a tragedy but is definitely a drama, is leavened by the eccentricity of these characters,” Jordan said.

Pryor Rendering has long been a work in process.

The first reading of the first act happened in 2012 in Oklahoma City.

From there, it was further developed and underwent a reading and more fine-tuning in New York.

The planned CityRep shows will be the first stage performances of the full piece, which Jordan said will likely receive further adjustments afterward.

“In the evolution of a play, you see from day to day where challenges arise, and you are always assessing and applying resources where you need them,” Jordan explained. “For example, you may decide that there should be a tap number here or something else there.”

Pryor Rendering director Stephen Nachamie was most recently associate director of the Tony Award-winning NYC revival of She Loves Me.

After its OKC premiere, the production moves to Tulsa for its third and final week.