“I’m a bassist, but I study spreadsheets all day,” he said. “The other guys work on publicity, equipment, recording, engineering, all kinds of stuff.” 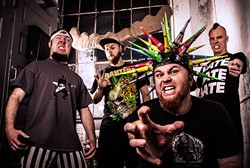 Sifting through the angst of contemporary heavy metal makes it difficult to believe there was a time when the genre did not take itself so seriously. Even band names evoke images of death, demons and a catalog of human suffering.

But Chicago-based humorcore act Psychostick believes that metal can be performed with precision and humor.

Matty Rzemyk plays bass for the outfit and wears moose antlers during its live shows. He chronicles the history of rock bands like KISS and Twisted Sister that believed having fun was what rock ’n’ roll was about.

“The [Rolling] Stones were not about fucking stuff up,” Rzemyk said. “They were having fun. Somewhere, metal got really serious, but there were always elements of humor in bands like Korn and Coal Chamber.”

Lead vocalist Rob Kersey and vocalist and guitarist Josh Key were high school friends in Odessa, Texas. From there, they moved to Phoenix, where Psychostick formed, and eventually moved to Kansas City and Chicago.

Rzemyk said the final move was based on two factors: a studio in the home of a Patrick Murphy and a central location.

“Murph is the fifth member of our band,” Rzemyk said. “He does all our videos, and he offered to let us build a studio in the basement of his house. Just as Kansas City is centrally located for its region, Chicago is the same. It’s four hours from a ton of stuff.”

A crowdfunded campaign helped build the studio, and the group has lived and worked in Chicago since 2014. The studio gives Psychostick a measure of autonomy rare in the music world. Rather than focus on albums and reserve time to record them, it is free to make and release music at its own pace.

“We don’t charge for the music typically,” Rzemyk said. “We put [songs] online for our fans and then ask them to hit the merch store. That’s where we make our money.”

An economic model like that is not viable for a lot of bands, but it works for Psychostick. It’s helped along because the members are all in their 30s and it’s an “all-hands-on-deck” band, Rzemyk said.

“I’m a bassist, but I study spreadsheets all day,” he said. “The other guys work on publicity, equipment, recording, engineering, all kinds of stuff.”

Their age helps contextualize humor, too. The band can count Pantera among their earliest influences, but they also know The Simpsons and “Weird Al” Yankovic.

“He’s squeaky clean compared to us,” Rzemyk said. “He made it okay to be funny. Nu metal and ‘Weird Al’ paved the way for Psychostick.”

Alex Dontre rounds out the foursome on drums. It is an amusing band, but the comedy is not a gimmick.