Pub W takes its food offerings to an attractive level 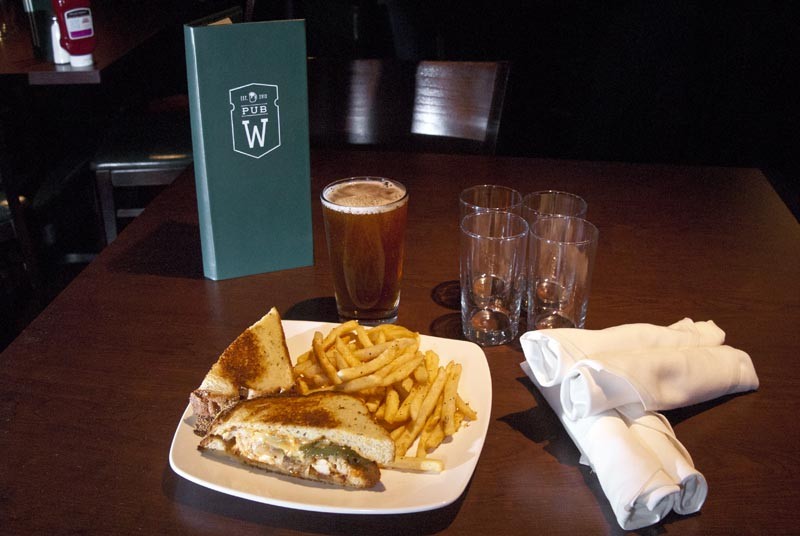 Pub W might be the only joint in Oklahoma that includes a quote from author, counterculture hero and vagabond Hunter S. Thompson on its menu. “Your body is not a temple, it’s an amusement park. Enjoy the ride,” is printed under the pub’s list of tempting entrees. The restaurant is a sanctuary of TV, sports, food and drink.

Its primary decor are big-screen television monitors in several rooms. There’s adequate seating well away from a horseshoe-shaped bar and also an outdoor patio. As might be expected, it can get noisy but it makes for a festive atmosphere. Though the place was packed, service was fast and friendly.

The fresh orchard salad ($4.50) comes with butter lettuce, apples, golden raisins and toasted almonds. It’s topped with Roquefort blue cheese bits and lemon vinaigrette and includes pita bread on the side. The kids menu is similarly reasonable, with your choice of fries or fruit and a drink included, there’s grilled cheese ($5), fried shrimp ($6), a burger ($5) or pigs in a blanket ($5).

Every Sunday, there’s a fried chicken dinner special ($14). The pride in this dish shows on the sandwich board sign out front and an enormous poster about it on an inside wall. Their pride is justified. Pub W serves a bone-in chicken leg, thigh and breast. It appeared to have been deep-fried rather than cooked up in grandma’s cast iron skillet, but the taste was good.

It was a nice plate of grub with one jarring note. The mashed potatoes were smothered in brown gravy rather than the traditional white, creamy variety. For a side dish, I ordered Corn O’Brien, which was meh.

However, the Asian salmon ($15) was attractively presented with sauteed red bell pepper and green beans and rice sporting carrot freckles, and the fish filet was glazed with hoisin sauce and scallions. The salmon was overbaked by around five minutes and would have benefited from more Chinese catsup.

In Spanish, a chupacabra is a legendary monster rumored to attack livestock and drink its blood. Pub W offers a sandwich named The Chupacabra ($9), pulled chicken, grilled jalapeños and onion, Muenster cheese and aioli garlic mayonnaise served on peppery bread.

Definitely try Gina’s Southern Devil’s Food Cake ($7) or the homemade buttermilk pie ($5). They are worthy of your personal amusement park.

Pub W is a saloon that takes its food offerings to an attractive level of culinary accomplishment.

What works: Good service and food. What needs work: Lose the brown gravy with the fried chicken dinner and serve it with a white, creamy gravy. Tip: If you’re looking for the pride of Pub W, try the chicken dinner special offered every Sunday.