In keeping with the season, the chefs from Guyutes bring Oklahoma Gazette readers a spicy, infused pumpkin chili. 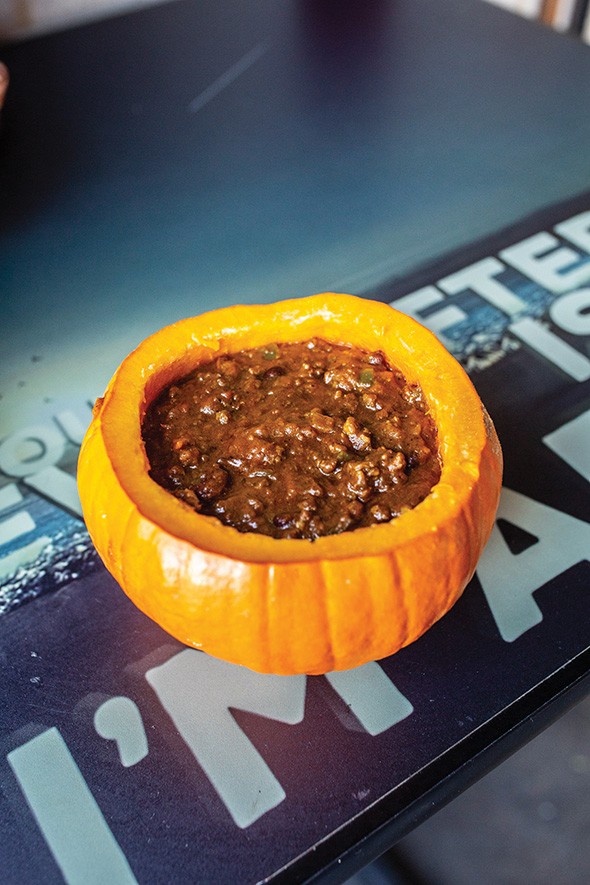 We are in the thick of pumpkin-spiced everything season as well as speeding quickly toward chili weather, and this month’s infused excursion is the intersection of both.

“I like using the smaller pumpkins. I just think they’re gonna hold better,” chef Matt Pryor said. “You’re going to cut the pumpkin open. You’re going to deseed it, take out all the stringiness out of it and then you’re going to cut it either to half or to quarters, however you want to do it for your cook time. I use olive oil, but you can also use coconut oil or avocado oil to brush it.

“When you’re checking it, you’re just checking to see if the lightest touch with a fork will pierce the outside skin and they’ll give you a nice roast. And then just spoon it out, go through a high-speed Vitamix and just run it through. If you need to add water, it’s right around a quarter of a cup, but you shouldn’t if you cook it right, and you can blend it to a puree to give you more of a rush of flavor than just the sweet flavor of, like, a canned puree, essentially. It’s still going to have the sweetness there, but it’s going to give you more levels of depth into your actual chili in the end.”

Grind up sausage and hamburger (or riced cauliflower for a vegan variety) and mix that with two cans of rinsed kidney beans. Add in four or five roma tomatoes, three bell peppers and a jalapeño with salt and pepper, chili powder and the puree.

“I’ve been doing pumpkin chili for a while, but the coconut thing I thought would be interesting, just the flavor profile, because the only time I know that that’s used together is for curries. It actually does have a bit of a curry taste to it, which I kind of like,” Jarrod Friedel said.

While the mixed ingredients do look like they will be dry, no water is necessary, as the pumpkin makes its own liquids when cooking.

“I don’t have to use any water or any other liquid. Pumpkin is the only thing. It looks super dry, but that pumpkin’s gonna moist all that stuff down. It’s going to cook down to a chili,” Friedel said. “I like the texture of it. It’s hard to actually get the pumpkin flavor to come through without adding a shit-ton of pumpkin, and if you overload it with pumpkin, it pretty much stays gross. So the coconut kind of balanced it out and gave it kind of a sweet, odd flavor that somehow worked. I was pretty scared in the beginning when we were trying it because I kept asking everybody, ‘Have you ever heard of pumpkin and coconut together? Nope? Sweet. Let’s try it out.’”

When I saw the construction of the dish, my first thought was, “Where is the broth?” The idea of making chili without additional liquid seemed counterintuitive to me, but it really works in the final product. The combination of coconut oil and texture from the puréed pumpkin give the dish the flavor profile and texture of something you might find in Indian cuisine, but the warmth of the chili powder makes it distinctly American-style chili. I didn’t want to overdose, and I was concerned when I saw the 90 milligram-per-bowl estimate, so I ate about a third of a serving and waited. There was no residual cannabis flavor in the dish, and the effects of a third of a bowl were limited to a very chill body high. The methodology of allowing the natural juices in the fresh tomato to combine with the pumpkin is something I’m going to have to replicate, especially with cauliflower, during the colder months.   —Jacob Threadgill

1. Add water to a saucepan and heat it up to 140-160 degrees Fahrenheit using a thermometer.

2. Add the 2 cups of coconut oil to a Mason jar

3. Place the top of a Mason jar lid at the bottom of the saucepan for a double-boil setup.

4. Place 7 grams of decarbed cannabis into a cheesecloth sachet and tie it off with butcher string.

5. Place the sachet into oil and place the jar in a saucepan.

6. Let the entire batch steep for 1 1/2-2 hours, making sure the heat does not exceed 200 degrees Fahrenheit.

7. Carefully remove the sachet from the oil. Do not squeeze it. Discard the sachet.

8. Store the infused oil at room temperature. It might re-solidify; warm it slowly to soften it.

Note: This infused coconut oil can also be used as a topical.

1. Preheat the oven to 350 degrees Fahrenheit and line a baking sheet with parchment paper.

2. Using a sharp knife, cut the pumpkin in half lengthwise. (Removing the top and bottom is optional.) Then use a sharp spoon or ice cream scoop to scrape out all the seeds and strings.

3. Brush the pumpkin flesh with oil and place it flesh-down on the baking sheet. Pierce the skin a few times with a fork or knife to let steam escape.

4. Bake the pumpkin for 45-50 minutes or until a fork easily pierces the skin. Then remove the pan from the oven, let the pumpkin cool for 10 minutes and scoop it out and use it for whatever dish you’d prefer.

If turning the pumpkin into purée, simply scoop it into a high-speed blender or food processor and blend until it is creamy and smooth. If it has trouble blending, add a little water. Baked pumpkin and pumpkin purée will keep covered in the refrigerator for up to one week or in the freezer for one month.

1. Brown the meat and onions

in a pot. Add the remaining

2. Simmer the chili on low for

from APCO Med, tested at