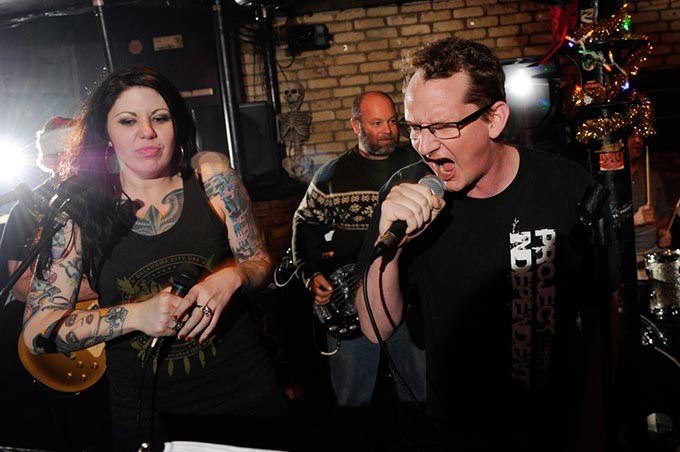 There was a time in the ’80s when karaoke, the Japanese import of singing popular tunes over studio-made backing tracks, was the after-work recreation of yuppies washing down their Perrier with tacky tracks from Jack Wagner or The Hooters.

Times have changed. Now, karaoke has essentially become a musical art form, one in which every demographic is represented, including the very people who once spat on it: the punk rockers.

Gaining in popularity every month, Punk Rock Karaoke is the brainchild of Chad and Misty Hunnicutt, a pair of old-school punks who have been in the scene since the ’80s. For years, they have wanted to craft a punk karaoke event for the metro, but until a fateful trip to Texas, they didn’t have the wherewithal to pull it off.

“When you sing karaoke, there’s really not that many alternative choices for songs, so bringing in the live band and the punk rock songs to the forefront, it was something we were fascinated with,” Misty said.

A trip to Dallas showed Misty that punk rock based karaoke was possible, and after taking a few months to put together the right band that had that combination, as she puts it, of “punk rock heart and soul,” they debuted at the Drunken Fry this past summer. Five shows later, it has become one of the premier outings for OKC’s aging alternative underground, where one can easily be a desk jockey by day and a punk rock superstar by night.

The backing band consists of Chad on bass, Jeremy Hodson (Lost Empires) and Grant Tatum (Havana Affair) on guitar and Daniel Deason on drums. Misty is the backbone of the show, pulling all the different aspects together, from making sure everything is cued up and the lyrics are on the right page to singing when nobody else wants to.

“Nobody ever wants to go first,” she joked. 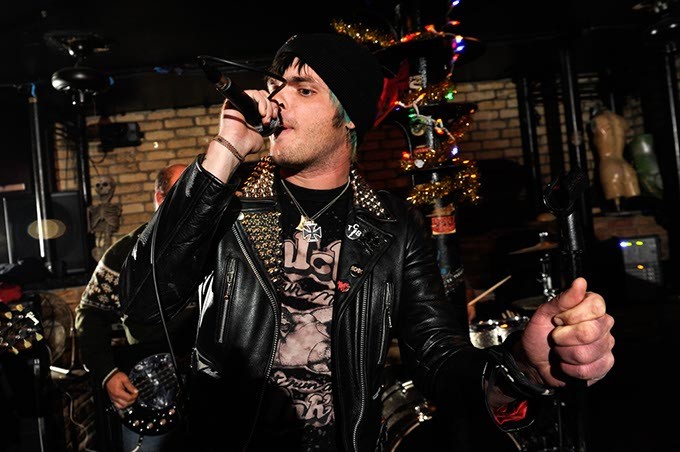 “In some ways, it’s more difficult playing with a live band because we’re not set up with a teleprompter that scrolls through the mix, but the great thing about this audience is that it’s made up of people that are really into this music so they know the material well,” Chad said. “They don’t really need the prompting because it’s not just a song they’ve heard on the radio a couple of times and are trying to duplicate. We’ve been really fortunate in that almost everybody who’s gotten up and sang with us has done a really great job.”

To date, the response has been great, with additional shows planned for January and beyond at the Drunken Fry and possible shows at HiLo Club and other venues to be named as word starts to spread across town.

Both Misty and Chad attribute this success to the long history of the punk community being welcoming to outsiders who feel they don’t fit in. They believe the atmosphere is one of support and allows everyone to be a part of the show, whether they are singing or not. They have received almost no backlash from the punk crowd, who would normally label things like this as a “poseur” activity.

Chad said this might be because the band performs a set list of nearly 26 songs — with a goal to learn ten new ones each month — that run the entire gamut of the history of punk, allowing something for every style in the room. It’s a variance that has even influenced Misty’s own musical tastes.

“Oddly enough, a song I never thought I would sing, Against Me, ‘Thrash Unreal,’ has turned out to be one of my favorite songs to get up there and sing,” Misty said. “It really gets the people involved. We have a lot of songs that have what I like to call ‘gang vocals’ that really call for people to join in and show some force. So you’ll look out into the audience and people grabbing each other around the neck and singing along with whoever is on stage. It’s fun.”

Contrary to the Sex Pistols’ famed refrain of “no future,” the Hunnicutts are looking forward to the upcoming year, not just because of their expanding shows but because of the opportunity to welcome more people into their family.