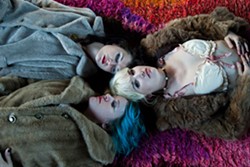 As she took her turn holding the droopy-eyed koala, it all finally made sense to Jessie Clavin.

“They would say in Australia, ‘Oh, the koalas, they’re all baked,’” the Bleached guitarist told Oklahoma Gazette during a recent phone interview.

The Los Angeles-based punk act recently returned from its debut Australian tour and is on the road for its second U.S. tour to promote Welcome the Worms, released April Fools’ Day.

Before she held koalas, fed kangaroos, visited Sydney Opera House or even stepped foot on Australian soil, Clavin developed a mild obsession with the strong and intoxicating eucalyptus fragrance used in oils, soaps and perfumes.

According to the Australian Koala Foundation, the marsupials almost exclusively eat leaves from eucalyptus trees in the wild. The low-calorie diet leaves them sleepy and sluggish for most of the day, hence the jokes about their sobriety.

Clavin said she felt at peace on the island continent. Her bandmates joke that it would be the perfect place to go if they ever needed to drop everything and disappear, because the weather along the coast is so much like their southern California home.

“I feel like everyone ends up having these personal connections to places we go to,” she said. “Of course we all enjoy everywhere we go, but with Australia, I feel like I belong there.” 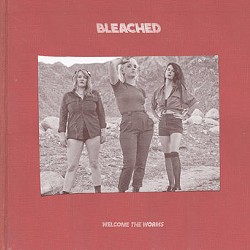 Escape was an alluring concept for the sister duo prior to the release of Welcome the Worms.

Jessie Clavin was evicted from her house and desperate to find a new place to call home.

Jen ended a tumultuous relationship and attempted to move on through drinking and partying.

The upheaval resulted in the strongest Bleached album to date. The project was recorded with producer Joe Chiccarelli (known for his work with bands The White Stripes, The Shins and My Morning Jacket) in the middle of a hot Los Angeles summer. Like koalas, the sisters chilled in the studio air-conditioning and away from the beating sun.

“We would go to the studio and just hibernate,” Clavin said. “The studio has to be cold inside for the equipment.”

The guitarist said her ideal day would be sunny but cool with a chilly breeze. The tone in Welcome the Worms could be described similarly. The music feels bright and cheery with a pop-punk aesthetic, but beneath lies an authentic darkness that grounds the tunes with substance, keeping them in rotation even after the long days of summer sun are over.

Clavin said the new album is the closest the sisters have ever gotten to the kind of music they’ve always wanted to make.

“I think a lot of it was just unleashing this truth and honesty that is within us as well, maybe having more confidence and not being shy or scared,” she said. “We’ve been doing this for so long, I feel like it was time to say, ‘This is truly what we want to be doing with our music’ and ‘Here it is; take it or leave it.’”

Bleached plays its Oklahoma City show on a Wednesday, two days after Halloween. There might be no more perfect time for the band to play the album single “Wednesday Night Melody,” a head-nodding cheer-up anthem given a fun, dark twist in the music video by director Gil Kenan.

“[Kenan] was like, ‘OK, I have this idea: Jen’s dead the whole video,’” said Clavin, remembering how the video concept was developed. “We’re like, ‘What? This is awesome!’ It kind of gave us a Weekend at Bernie’s feel but bringing in our love of horror movies too.”

In the video, Clavin and Grace discover Jen pale and lifeless in her room before a show. Instead of canceling the gig, they prop her up on stage like a marionette.

“Our parents can’t watch it though,” the guitarist said, “because they’re like, ‘Jen really looks dead.’”

Kenan directed the 2015 Poltergeist reboot, a film that makes multiple references to the band.

Clavin remembers being snowed-in on their previous U.S. tour inside a large hotel in Utah. It reminded her of The Shining.

Like many other fans of the horror genre, Halloween is a special time for Bleached. Clavin said the band celebrates the holiday through October.

“We love Halloween; it’s a very big holiday for us,” she said. “We miss being home for Halloween, but it’s really nice being in a different place. We’ve been decorating the stage every night.”

Though it will technically be November by the time Bleached pulls into the lot at 89th Street Collective, Clavin said it is unlikely they will let the change in month curtail their fun.

“No one wants Halloween to end,” she said.

Bleached with Beach Slang and Hunny