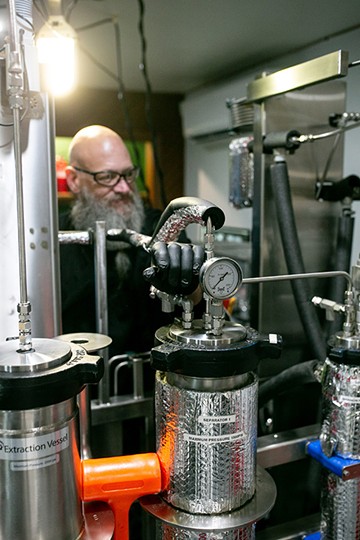 Sometimes the best strategy is sticking with what you know, and that is exactly how Simple Cure was founded.

Managing partner Lance Kimball had spent the years previous to the passage of State Question 788 founding and operating Flagship Vapor, a nationwide distributor for nicotine e-liquids for vaporizers, so being one of the first cannabis vape cartridge processors in the state was a no-brainer.

“I think it’s something that was going to be a natural progression for us and a way to continue to do nonsmokeables and serve our community in a meaningful way,” Kimball said. “But the reason for the urgency was because of Flagship being regulated out of existence, and so when the teachers went on strike here, we were confident that that was going to lead to a yes vote on [SQ]788. So Michael and John and Jennifer and I thought that we should move into the cannabis space.”

Once the ground was laid for Kimball’s new imaginary company, he and others involved in the business set out for other cannabis markets, traveling first to Colorado and then out to California to tour processing labs, grow facilities and dispensaries before heading north to Oregon. Ending the trip in Washington where they met with extraction equipment and hardware manufacturers, they returned to start building Simple Cure.

“Through it all, we saw a number of different approaches from extraction labs, and I had early on seen the 100-percent cannabis strain-specific vapables and really was taken aback by that. It was nothing that we had really even considered as an option before,” Kimball said.

Running that kind of low and slow cannabis CO2 extraction became the backbone of Simple Cure’s process; it took care not to damage terpenes and cannabinoids during the process and then reintegrating them. A dry-erase board in the lab is filled with all the different strains that were used during individual runs.

“All of our terp fans that come
over to the lab, that is the highlight
of their visit, I think.”
—Lance Kimball tweet this

“We take those decarbed fractions and homogenize those back with the terps that we have taken out prior to decarb with the proper ratios. We’re careful not to over-terp, so usually six to eight and a half percent is the range that we’re reintroducing those terps back in with, so it’s a perfect concentrate from the flower that we took it from. And we’re also careful to remove those terpenes prior to decarb,” Kimball said. “At 120 degrees [Fahrenheit], there’s significant terpene degradation that occurs, so we pull those guys off before decarb because we’ve got to get temperatures well beyond that to achieve full decarb, so we pull those terps off first, then activate our cannabinoids so that it’s the complete profile that the flower had to offer in the concentrated medicines that we’re putting out there.”

Those terpenes are stored in their own refrigerator inside the lab. Each glass jar is labeled accordingly.

“All of our terp fans that come over to the lab, that is the highlight of their visit, I think,” he said. “We’re going through about five to seven and a half pounds a day in the lab that we’re touching, but we’re not start-to-finish on that, so it’s a multi-day process for each batch, especially now with testing as a part of every batch that we do. Now, we bring the biomass in, set it into its sequence. We really keep a good rotation in terms of indica-dominant and sativa-dominant and tried to spread out some of our fan favorites so that it’s not just on the board this week, but we try to space it out for a period of time. Run it in a day, then it’s off to testing, got to make certain that we meet suitable cannabinoid potencies to even make certain that it’s cartworthy oil and then we’ve got some processes where we do lipid mitigation and then the actual carting and podding process is tedious, and then packaging and then batch-labeling everything. Several hands are touching it before it ever leaves the lab and heads off to a dispensary.”

No thinning or cutting oils are used in the process, so the “full-spectrum” oil that they put into their cartridges and pods are as pure as possible. The use of that full-spectrum oil also adds an extra dimension to the edibles that they produce.

“I’m a believer in the entourage effect. I think the cannabinoids promote the benefit of one another, so you’re getting trace amounts of CBN, CBD, CPG, all of those cannabinoids with each one of our edibles,” Kimball said. “We work to get the 10 mg consistency on there in THC, and that’s what we’re required to report on our packaging and that’s what everybody kind of steers their focus on in their purchasing decision making, but it’s the experience that people have where we hope they place their value.”

Simple Cure also produces topicals and tinctures. Despite the protracted and intensive extraction process, they were ahead of the curve putting those products out to patients.

“I’m pretty certain that we were we were first, and so that was not an easy task because as Oklahoma is saying yes to [SQ]788, Canada was coming online, so acquisition of cannabis hardware was tough, so talking about almost yearlong lead times in some of the primary components to do what we were doing so that early on kind of belief that [SQ]788 was going to pass and getting our research done and building those relationships with those vendors so that we could kind of circumvent some of those instances that were holding other people back turned out to be really helpful for us. … We’re fortunate in that we’ve been dealing in the electronic delivery system space since 2012, so in terms of hardware, all that kinds of stuff, we’ve got relationships that are strong and kind of expedite a lot of those things,” he said. “We’re all born-and-raised Okies, and so we take a lot of pride in what we’re doing. The Flagship four, with Michael and Jennifer and John and I, we’ve always kind of relished in the role of being renegades, being pirates, so to speak, or pioneers, and so to do things for the first time in our state, we wear that as a badge of honor and we feel a good amount of pressure to do it right. Not only to represent our company and ourselves, but to represent our state in a positive way.”