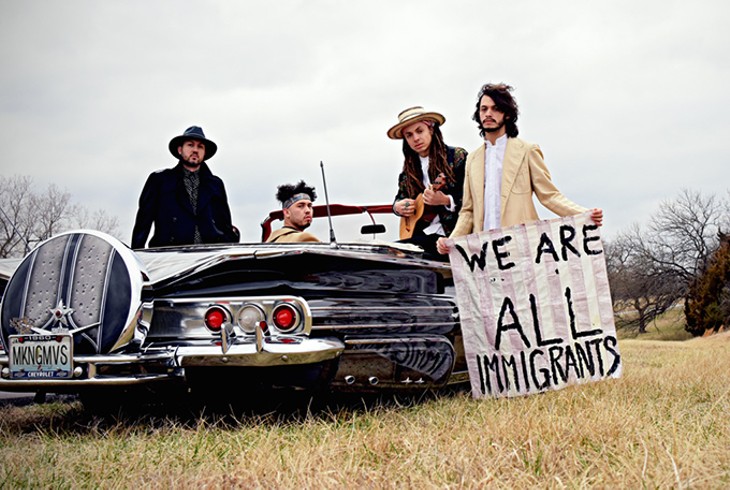 For the past several years, Making Movies’ Carnival music and education festival has been making waves in its native Kansas City, Missouri. Now the poetic and frequently political fusion Latin-rock band is sharing the experience with the rest of the nation.

Making Movies guitarist and vocalist Enrique Chi recently spoke with Oklahoma Gazette about the history of the band’s Carnival event, which began four years ago when the band began inviting other prominent Latino bands to perform at a music education camp Making Movies annually held in Kansas City. The camp grew into a mini festival, and this year, the band is taking the concept on the road for the first time.

Chi said the Carnival name comes from the Spanish Carnival celebrations in colonial Central and South America. Historically, it was a time when everyone was in festive spirits and the Spanish would let the indigenous and slave cultures show their roots.

“Normally, they were like, ‘OK, slaves, put away your drums and your spiritual dances. That doesn’t seem very Catholic to me, so stop that shit,’” Chi said.

But more than a celebration, it was a time when the native populations would mock their colonizers without them knowing, coming up with songs and dances used to covertly express the oppression of Spanish rule.

“To me, it’s this dichotomy and juxtaposition of celebration, but also protest and a moment of cultural inclusion,” Chi said. “Being able to dance your protest seems kind of awesome.”

The spirit of those historic Carnival celebrations will be alive during Making Movies’ stop in Oklahoma City. Chi spoke at length with Oklahoma Gazette about the Carnival series and why Billy Bragg and Nora Guthrie have pleaded with the band to spread its message across the nation.

Oklahoma Gazette: What’s it like to take your Carnival concept on the road to places like Oklahoma City?

Enrique Chi: It’s exciting and cool because I think we’re hitting some cities where there is a lack of cultural music and representation. We’re going to be playing with Mariachi Flor de Toloache in Oklahoma City, and I don’t know if you’ve ever seen them live, but they are just an incredible band.

OKG: Not live, but I have seen their NPR Tiny Desk Concert, which was really amazing. They are another reason to be excited for the show.

Chi: One hundred percent. On top of all the tour dates, we’re releasing collaborative music, and right around the time we get to Oklahoma, we will be releasing a song in collaboration with them. So for me as an artist, although it has been an insane amount of work, it has been insanely rewarding. We’re not only curating these events to try and make a statement and have a good time, but we’re creating music with it.

OKG: Are you still letting DACA (Deferred Action for Childhood Arrivals) recipients into your shows for free?

Chi: Yes, that’s another thing we have been doing for two tours now. We thought that last fall would be the last time that we would have to do that, that something would be resolved on that level. Unfortunately, that’s not the case. For us, it was like this really simple act of solidarity. We can get really overwhelmed by how shitty the world can be sometimes, and we’re like, ‘Well, what do I have access to [to make a difference]?’

Everyone who has come to the show through that mechanism has come away feeling included and supported. When they come and talk to us, without exception, they’ve had tears in their eyes. For me, it was moving to realize this really simple act of solidarity can have such a huge impact.

OKG: With the atmosphere around the issues of immigration and the DACA program that this country has seen recently, do you feel responsible to take these sorts of stands or are you naturally compelled to do something?

Chi: Well, I’m an immigrant myself [born in Panama]. When we started volunteering for this nonprofit inside the immigrant community, I kind of resonated with the kids because I could relate to them. I remember the feeling of being brought to the U.S. and feeling a little lost in this new world. Because of different life circumstances, some of which my parents had control over and some of which they didn’t, we had access to getting all my paperwork filled out. When I meet a kid who has made no different choices than I have living in the United States and they realize their life is so limited is heartbreaking.

I’m not a politician — nor a policymaker or international policy expert — but let’s at least solve this. I know what a 12-year-old needs. I know that a 12-year-old doesn’t need to think that he’s already a criminal just by being alive. That’s certainly not OK, so let’s solve that first and foremost, and then maybe we can start addressing some other things.

OKG: Music and art can make people think of different kinds of people and cultures in a way that they wouldn’t have before.

Chi: Yeah. I think that’s kind of the role of art; you get to step into someone else’s shoes or brain for a second. We were at the Folk Alliance International conference [in 2017], and Billy Bragg was the keynote speaker. We performed right before him, and he spent some time talking about protest music and his relationship with that. He really cemented that into our heads right before we released our last album [I Am Another You, released in May 2017]. The music was already done and the songs were already written, but he put into my mind that as an artist, you can’t change policy but you can give people empathy. The power of a three-minute song can put you in a situation that you aren’t currently in or maybe have never been in. You can feel in love or you can feel heartbreak or anger or gratitude. It’s so powerful — more powerful than a film or a book in its immediacy. We have to use that power to showcase what we feel and see.

OKG: There are a ton of Oklahoma artists who go up to the Folk Alliance conference every year.

Chi: Yeah. And to tie it all back to Oklahoma, we got off stage and Billy Bragg, he was like, ‘You all did great. You all fired me up.’ I was like, ‘Oh, man! That’s awesome! I’m so excited for your speech.’ He gets on stage and talks about peace and Pete Seeger telling him, ‘Look, it’s not my turn anymore. You have to write songs for your people now.’ So Billy comes offstage, and I tell him, ‘Hey, you really fired me up. I wrote down some words you said. Thank you so much.’ And Billy is looking at me and says, ‘Well, you know, it’s your turn now. I can’t write the songs for your people; you have to write the songs for your people and what they’re going through.’ At that exact moment, Nora Guthrie walked backstage and she’s huge friends with Billy. She said to us, ‘Oh, you guys were amazing. That’s the kind of thing that needs to be on national TV. Those are the stories we need to hear. We can’t do it anymore — we’re out of touch; we’re too old. It’s your turn now.’ She hadn’t heard Billy say that same thing earlier, and it was just like bing bing. At that moment, I was just like, ‘Well, I guess I’ve got to do this.’

OKG: That’s pretty much a torch-passing moment. They’re literally telling you to go out and spread these messages.

Chi: Yeah, and before, we were afraid of the ‘political band’ label. But that’s when I was like, ‘You know what? Let’s just do this.’ Our songs are about the immigrant experience, and if people want to label us a political band, let’s just be vocal about the things we see in the world that we don’t agree with.