Put on your Sunday clothes to see a star-studded cast bring Broadway’s favorite Yonkers matchmaker to life in OKC. 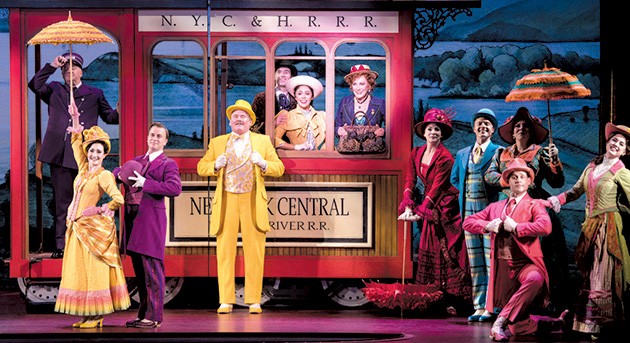 Ironically, Hello, Dolly! is such a large production that cast members have trouble finding time to say hello to each other.

“We have 31 people in our cast, and if I don’t specifically work my way into seeing everyone, I can go almost weeks without seeing people I actually work with every day,” said Sean Burns, who plays Barnaby Tucker in the touring revival of the classic Broadway musical. “It sounds silly, I know, but that is something I noticed from the get-go. I was like, ‘Oh, man! I’ve got to say hi. I can’t not say hello to people I’m working with every day for weeks on end.’”

Hello, Dolly!, presented by OKC Broadway, runs Oct. 15-20 in Thelma Gaylord Performing Arts Theatre at Civic Center Music Hall, 201 N. Walker Ave. Featuring show tune standards “It Takes a Woman,” “Before the Parade Passes By,” “Put on Your Sunday Clothes” (also featured in Pixar’s Wall-E) and the title song, the touring version of the show, now in its second year, said hello to several new cast members last month, including John Bolton (Anastasia, A Christmas Story: The Musical) as the “half-a-millionaire” Horace Vandergelder and Carolee Carmello (Parade, The Addams Family) as the eponymous matchmaker Dolly Gallagher Levi — who convinces Horace to travel from Yonkers to New York City in search of a wife and take his clerks Cornelius (Daniel Beeman) and Barnaby, niece Ermengarde (Laura Sky Herman) and her fiancé Ambrose (Colin LeMoine) along. The musical tracks the courtship rituals of the younger generation of characters, but the reluctant romance between curmudgeonly Horace and charismatic widow Dolly provides the show’s heart.

“To have the top two in the show change has really changed the dynamic of the show,” Burns said. “The directors didn’t bring in cookie-cutter replacements for those two. They’re playing the roles as they pertain to them, and it’s really cool to see them take it on. It’s a different show. It really is.”

Performing dance numbers with Bolton’s Vandergelder, for example, is a striking enough change to keep Burns on his toes.

“He is so tall,” Burns said. “He’s just a tall man, and he’s very quick and light on his feet. During rehearsals, I found myself almost jumping at how quickly he would whizz by me because the previous Vandergelder was about my height and he had this way of moving about the stage that was so intentional in its own way; it was just much slower. So it’s little things like that, but when you get so used to the muscle memory of what everyone seems to do every single night, seeing anything new is fun and feels very different.”

Having the opportunity to work with veteran Broadway actors Bolton and Carmello (as well as Lewis J. Stadlen and Betty Buckley, who previously played the roles) has been a valuable educational experience for Burns.

“While they are all vastly different from each other,” Burns said, “there’s so much to learn just by watching all of them. It’s incredible. … It almost feels like I’m gushing in a way where it sounds like it could be over the top or false in some way, but truly, just getting to watch those four people and be in the wing and get to interact with them, it is almost like a master class.”

Burns has been especially impressed by Carmello’s versatility and openness as an actress in a role famously originated by Carol Channing and played by Pearl Bailey, Phyllis Diller, Ginger Rogers, Ethel Merman, Barbra Streisand, Bette Midler and Bernadette Peters.

“There’s almost no ego to it,” Burns said. “She’s going to try and try, and if she already tried it three ways and somebody asked her to try a fourth way because those three weren’t working, she’s never acted in a way like, ‘I was doing it my way. You should want it my way.’ She is so willing to try things and willing to move on to the next thing.”

Before the new cast took the show on the road, they had the chance to meet with Jerry Zaks, the director of the Tony-winning Broadway revival. 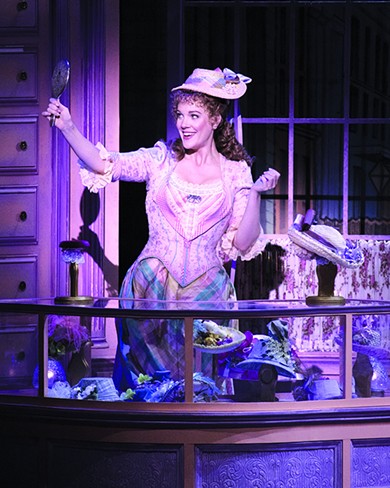 “It’s not typical, honestly,” Burns said. “I’ve done tours where I went the entire time without ever having met any of the original creators, so it was very cool to have him take the time and come in and usher these new people in — not to the show itself, but into their own versions of the show. Little things were added, bits that had been done in the past that are new for me but not new for Jerry Zaks because he has so many tricks up his sleeve, but things definitely changed. It was an adjustment, but it was really fun to do.”

Though Hello, Dolly! originally opened on Broadway in 1964, winning 10 Tony Awards and widespread critical acclaim, and was revived in 1975, 1978, 1995 and 2017, Burns said he was originally only familiar with the musical from its tepidly reviewed 1969 film adaptation.

“The show is not revived all that often because it usually takes kind of a star to make the show work,” Burns said. “It’s usually star casting, so the show only revives itself once every however many decades. I was never lucky enough — I just fell in that gap, technically, I guess — to see it on stage and in a big professional production. … The show itself takes on such a different energy, and I love the movie, honestly; I have nothing bad to say about the movie, but … seeing it on stage is a whole other game. It’s incredible. … The amount of detail and the sheer size and spectacle of the setting and the costumes of the show — it’s insane. There’s so much to look at.”

Though Burns has some trouble relating to the musical’s late 19th-century setting, he said a conversation with associate director Stephen Edlund helped him better understand Barnaby’s character.

“He has a line at the end where he wants his back salary for the past four months, and it’s $6 and some change,” Burns said. “But while the setting was different and times were different, people were the same. My job and my whole thing in life is to help out Cornelius, who is my best friend in the show. That is how I think of Barnaby. … He may be a little simple. He’s not always the first to the stop when it comes to thoughts, but he’s completely altruistic and wants what’s best for everybody around him, but especially his best friend. … It’s all very different than anything I’ve experienced, but the person himself is very easy to empathize with. Anytime that you’ve had a real, genuine care for someone and hoped the best for them and tried your best to help them out, that’s him at his heart, the whole show.”