Toad the Wet Sprocket brings its three decades of music to Tower Theatre. 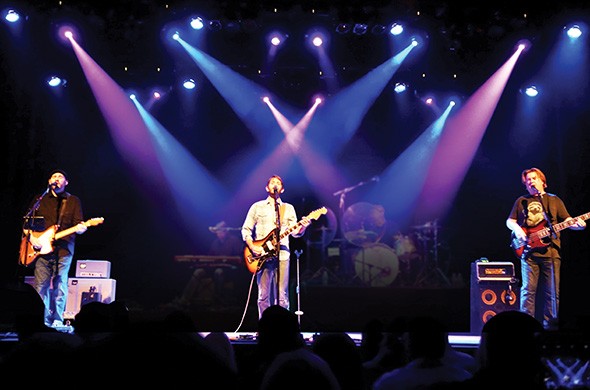 Formed in Santa Barbara, California, and named after a joke from Monty Python’s Contractual Obligation Album, Toad the Wet Sprocket originally came together in Oklahoma! — a high school production of the Rodgers and Hammerstein musical, that is.

“We were four people doing theater in high school, and we were all in a production of Oklahoma!” bassist Dean Dinning said. “I actually played Andrew Carnes, which is Ado Annie’s shotgun-toting father who sings ‘The Farmer and the Cowman.’ Three of us had known each other before, but [frontman Glen Phillips] was a freshman that year. In comes this little guy to the theater department, and he played guitar and wrote songs, and we started jamming.”

“I remember making both of them,” Dinning said. “They both have an overall mood. Dulcinea’s was a little more stripped down, almost playing live in a room. The whole record was pretty much tracked together live and then overdubs on top of that, and we all played, with our amplifiers isolated and things, but in a big room together. … We were trying to capture that vibe, and listening to the whole thing, I think it was successful. fear was much more ‘Let’s get as many songs done as we can because we’re only here for a month.’ We went away to a residential studio in Reno, Nevada, to make that record. It was the middle of winter, and we just immersed ourselves. So we ended up with a lot more material than actually ended up on the record, and we were really kind of all over the place. There’s some experimental stuff that got left off of fear that ended up on the In Light Syrup collection, which is a B-sides and rarities record. … They were totally different experiences. fear was our first time in a big studio, where we could literally do anything. If we wanted to get string players, we would hire a string section from the local symphony orchestra and get an arranger and have them arrange the strings on ‘Walk on the Ocean,’ and then you’ve got session cellos and violins coming in. It was all just very, like, ‘Wow. We can really do this?’ It was fun.”

The band broke up in 1998 following the release of Coil and, after several years of one-off performances and collaborations, reunited for a 2006 tour. New Constellation, the result of a successful Kickstarter campaign, was released in 2013, and EP Architect of the Ruin was released in 2015. Dinning said the main difference in the experience recording the new albums was the advanced technology the band was able to take advantage of.

"I have always felt like we have one of the best catalogs out there."—Dean Dinning tweet this

“These days, instead of making a demo and then re-cutting the whole song, you can really just rerecord the parts of the demo that are not up to optimal quality level and then call it a master because it’s all the same,” Dinning said. “If you get a really great vocal the first time around, you can use it. … Mikal Blue, who produced the record, he says, ‘We can always try to beat it, and if we don’t beat what we have, then we’re happy with what we have. We can always go further. We can try, but we also don’t want to sterilize it and drain all the energy.’ A lot of the time, people brought in demos that had been done in Pro Tools, and we just made the final recording right on top of it. … You can just use what’s already good about it.”

Though new technology speeds up the recording process and relieves some of the associated stress, Denning said he thinks it would not have made much difference to the band when it was recording Bread and Circus in 1989.

“Our first record was made for $650 in a residence in Thousand Oaks, California,” Dinning said. “Going back in time and having Pro Tools, we would still only have the $650. … If we were to, say, go back in time and a letter comes from the minister of finance in a small Arabian country saying that my long deceased Uncle Richard or whatever has left me a million rubles, maybe that would change things, but that’s beside the point.”

What Dinning wonders is whether, 30 years later, a band with such a limited budget would have been able to record the album at all.

“The one thing that I think about sometimes is that records are getting very expensive to make, and you can’t really do it for $650 anymore,” he said. “It costs about at least a couple grand a song to do it right these days. So I worry sometimes that being able to record music at all will become a rich kids’ game and only wealthy people will be able to play it. So in that way, it’s good that people can buy Logic on their computer for $200 and make some pretty good-sounding recordings that are least going to be good enough to get someone excited, and maybe that rich uncle does show up.”

Three decades in, Dinning said he is still proud to play Toad the Wet Sprocket songs.

“I have always felt like we have one of the best catalogs out there, and that comes from going out and playing it every night,” he said. “I’m glad that we made music that was beautiful, or at least trying to be beautiful and have depth and poetry in the lyrics, lots of harmonies, and it’s challenging. … It’s also very rewarding to play this stuff. I don’t want to rag on anyone, but there were some bands that were out when we were out that played some rather childish music, and that would be annoying to have to go out and play that. But I don’t feel that way about our stuff at all.”

The quality of the music, Dinning said, keeps the band’s enthusiasm high after all these years.

“We’re excited to play the show,” Dinning said. “We’re not one of those bands that you go to and they don’t play the hits. We do, and they sound really, really great. That’s just the way it is. We’ve been doing this long enough, and we kind of got it down.”