After a brief introduction to this more colorful event in Bourne’s life, we return to the cold blues of hacking. 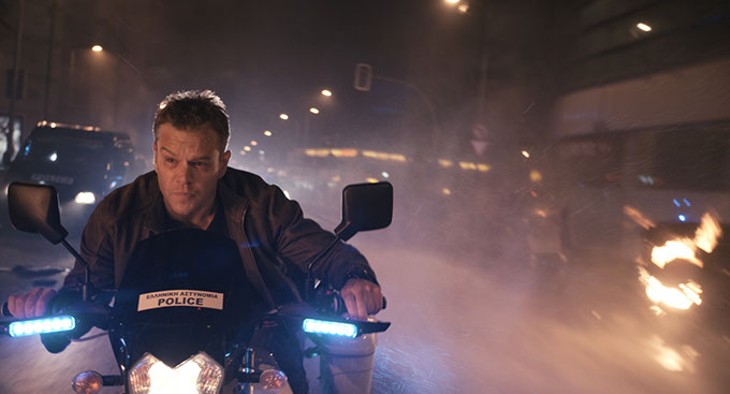 The Bourne films have been the American antithesis to James Bond since Matt Damon’s violent debut as Bourne in 2002. The spy craft is computerized, drug-addled and technical while the love is as harsh and violent as the films themselves. Fourteen years later, Damon returns for Jason Bourne, a distilled form of Bourne whose lack of plot is only superseded by its incessant movement.

For those who suffer from the same dodgy memory as our protagonist, the film opens with a recap of the series’ greatest hits. These consist of code-worded conspiracies, lost loves and hazy memories so unstable they register on the Richter scale. Bourne has left the spy world in favor of a simpler life: cold-clocking oily brutes for sport in a Turkish border town. After a brief introduction to this more colorful event in Bourne’s life, we return to the cold blues of hacking.

This film has so much hacking in it that it’s amazing another film already has the title Hackers. If someone’s not walking slowly through a crowd or down an alleyway, they’re in front of three or four computer screens, clacking away at the digital blurs we’re assured are relevant.

Julia Stiles, whose relationship with Bourne seems tenuous, returns as a computer-based spy. Alicia Vikander is forced into a role as the ambitious head of CIA cyber security, a role so stifling that everything lively and warm about her is smothered. Riz Ahmed plays a role as a Mark Zuckerberg analogue so rewritten that it lacks any personality at all. Together, the trio and Bourne’s subsequent investigations mean that half the film is spent focused on a desktop.

With the main mystery already solved by the previous trilogy, Bourne meanders through other people’s problems while others try to convince him that he should care. Damon is rigid and tired with the physique of a warrior, yet lacks the spirit. His motivation is gone — every scene is a question of relevance.

But he has a new nemesis. Tommy Lee Jones plays a dry and dusty CIA director with all the energy of a plastic science class skeleton. His disinterest in the movie filters out of him like a desert wind, empty and beige. Their final confrontation is as exciting as depositing a check in the bank. Enough courtesy is exchanged so the experience isn’t too awkward, but nobody’s engaged in moving conversation with their teller.

Previous films in the series, despite their convolution, have been fun for the sheer action competence displayed by the technical team. Shaky-cam savant Paul Greengrass whips and pans as painfully as ever, causing at least two instances of motion sickness in my theater.

I had to look down at my knees during a car chase because along with the intense camera spasms, the editors put the entire sequence into a blender.

Greengrass can no longer create an action movie; hell, he can’t even complete an action. A car might hop a curb, but we’ll cut two or three more times before we see it land one second and six inches later. It’s like being in a 15-minute car accident rolling down a hill and then being told to appreciate the adrenaline.