RACE Dance Company reimagines The Nutcracker with a modern twist 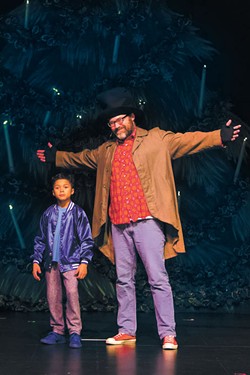 The Nutcracker is perhaps the most popular ballet in the world, and Pyotr Tchaikovsky’s score has become a Christmas tradition, but something about the celebration of opulence never felt quite right to Oklahoma City dance instructor Hui Cha Poos.

Before Poos established RACE (Radical Application of Creative Energy) Dance Company and became an instructor at the University of Central Oklahoma, she taught at Douglass High School around the turn of the century, where she met a student named Carlos Robinson, whose story of finding success out of a broken home would serve as inspiration for her own adaptation of the classic The Hip Hop Nutcracker.

“I was working with Oklahoma City Public Schools, and I wished I could make a show for them,” Poos said. “The Nutcracker came about because it starts off so pretty. The first scene is in this beautiful house with gorgeous clothes. It’s not relatable.”

Poos remembered the story of Robinson, who now works in recruiting for OCCC, and used his upbringing as inspiration for a lead character of Hip Hop Nutcracker. Instead of a female lead with a perfect nuclear family, the lead of the RACE production is named Carlos, and he longs for a father he has never met.

“A commonality with a lot of the kids that I work with is that a lot of the boys don’t have a father figure,” Poos said. “It’s a reality I wanted to hit upon.”

Poos treats Hip Hop Nutcracker as a living document. Each year, she works with a variety of friends to revamp the script and numbers and admitted that it’s one or two years away from being where she wants it.

After her initial idea for the production, it sat as a dream until she met Dominick Brown, who joined RACE at the age of 13.

Brown played the role of Carlos the first three years of the production, and he is now a freshman dance major Philadelphia’s The University of the Arts.

“I met a lot of people that I wouldn’t have known otherwise, and I’ve gotten a ton of opportunity because of RACE,” Brown said by telephone. “I wouldn’t be here today without them.”

Brown remembers how excited he was the first time he heard a radio advertisement for Hip Hop Nutcracker mention his character’s name because it was his first starring role.

“[The role of Carlos] made me appreciate what I had more,” Brown said. “ I have two parents and a nice house, but I have friends and family that could relate to Carlos more than I could, so I took from their experience to try to make it more realistic for the audience. It was a realization that I was so fortunate.”

Brown’s epiphany is similar to what Poos hopes will happen with the audience.

“The key factor in the storyline is that not everything is perfect all of the time. What you have to learn how to do is be grateful for what you have and then go from there,” Poos said.

The role of Carlos has been taken over by Daxton Anderson, who, like his character, doesn’t come from a traditional nuclear family, being raised by his grandparents.

“His grandmother came up to me and told me that she couldn’t believe this story exists for him because he can totally relate,” Poos said. 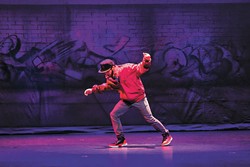 Carlos travels to three different imaginary lands where, instead of mice and soldiers, like in the original Nutcracker, he encounters ninja mice and robot soldiers. This year’s adaptation includes the addition of the character Mother Ginger that Poos said is a stand-in for Oklahoma teachers, and her gingerbread cookies are proverbial students.

“We’re impacted politically working with schools, but our show isn’t politically charged,” Poos said. “I didn’t want to make it overt for the children, but audience members that understand the plight that we’re in will get it.”

The adaptation follows Carlos through The Land of Possibility, where he imagines what it would be like to meet his father. In The Land of Hidden Treasure, he appreciates those who are in his life: family, friends, teachers. The production ends with a duet between Carlos’ mother and father.

“In this age where we talk about divorce so much, we forget that the kids need to know they were conceived out of a place of love,” Poos said. “All they see is the fight afterwards. Even if the marriage doesn’t make it, there was a point where they did love each other. We wanted to end with that on a positive note.”