An exhibit at OKCMOA explores the ways the Pre-Raphaelites brought color and sincerity to art in the 19th century.

On Saturday, Oklahoma City Museum of Art opens Victorian Radicals: From the Pre-Raphaelites to the Arts and Crafts Movement, its latest display featuring works from as early as the mid-1800s. The display highlights a period of significant artistic transition and includes several works never seen outside Birmingham, England.

As Great Britain led the world as a global epicenter of industrialization in the mid-1700s, several of its people were beginning to ponder the social implications they witnessed unfolding before their eyes well into the mid-1800s. Among them were three young artists who, in a time of smoke-ridden factories and mechanistic artistic approaches, dreamed of bringing life to a world that appeared to be losing its expressive freedom.

In 1848, they founded the Pre-Raphaelite Brotherhood, a sort of artist co-op comprised of a group of seven men who, inspired by the ideals of Romanticism, understood the importance in the relationship between nature, beauty and art.

“They’re sort of the hippies of the era,” Oklahoma City Museum of Art marketing and communications associate Jessica Valentine said. “They were questioning the new industrial era that was being introduced to them.”

“This is really an important point, [as their goal was to] go back to simpler ways, closer to nature,” museum coordination coordinator Roja Najafi said.

The name was chosen based on their preference for the works that came before Raphael, which, among other creative elements, involved rich, vibrant color schemes. Paintings from that era also seemed to preserve a sense of sincerity, a quality the Pre-Raphaelites found particularly attractive.

The combination of Romanticism, color and sincerity are thoroughly expressed in their paintings, especially those involving women. Many of these girls, representative of a heroine, are colored with a melancholic countenance having “some kind of a romantic, sad tragedy that is happening to her,” Najafi said.

Many of the models who posed for the original Pre-Raphaelite Brotherhood painters later became artists themselves. Some of this work will be displayed at the upcoming event.

In one of Najafi’s favorite paintings, “Beauty and the Beast,” the beast’s representation alongside the woman demonstrates a distinctive blend of qualities that she describes as “violent but tame.”

“They are really a funky group of artists,” she said. “They still do all the subject matters from landscape to historic painting to religious painting as other painters do, but they do it in a different way.”

The ways in which these artists differ from others of their time will be clearly demonstrated for those who attend the museum’s exhibit. In the first section, all displays will be dedicated to the art before the advent of the Pre-Raphaelites. The second section will demonstrate their impact, offering a sharp contrast to the time preceding their own.

“When you go to the second section, you see the difference. You don’t need to know; you just feel the colors,” Najafi said, describing the exhibit’s layout. “They came and broke the barriers that the Royal Art Academy had established for a long, long time.”

In doing so, they inspired generations to come. As a tribute to those who followed closely the path of the Pre-Raphaelite Brotherhood, the display will also include works by well-known figures within the Arts and Crafts Movement and William Morris and his associates. 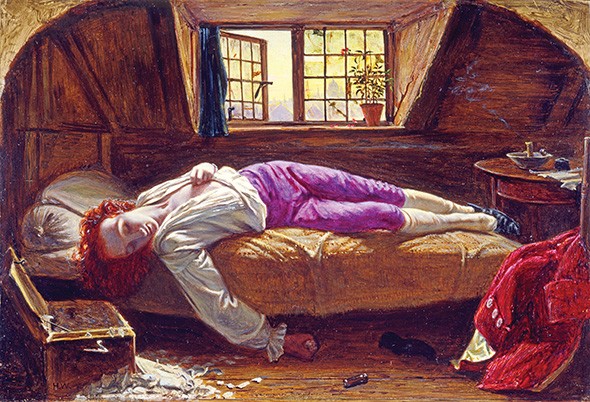 144 different objects from the Brotherhood and those they influenced come together in a massive presentation encapsulating the avant-garde artistry manifested throughout the Victorian period. But these objects are not limited to paintings alone.

“Before, the status of a painting and a sculpture was much higher than decorative art. But these Arts and Crafts movements, they decide … there is no hierarchy in the art world,” Najafi recalled. “They are one in the same, and they have to find this unity.”

In addition to the paintings the Pre-Raphaelites produced over the course of their lives, these subsequent movements and the ideas they inspired were, at their time, considered nothing short of radical.

Those interested in learning how their ideas shaped the artistic landscape that was to come are welcome to attend Julie Codell’s lecture Being a Radical Artist in Victorian England 6 p.m. Dec. 5.

Codell, professor of art history at Arizona State University, plans to discuss, “What it means for an artist to be radical or avant-garde in the Victorian period and perhaps the difference in the meaning of these terms then and now.”

“I want to help [attendees] not only to understand the exhibition but also to enjoy it as part of their art history education while they are in school,” she said. “I hope what they learn will inspire them later in their adult lives to become regular museumgoers.”

Considering the size of the exhibit, Oklahoma City seems like a great place for Codell to impart her wisdom. Najafi cites it as the largest event she has been involved with in the entirety of her curatorial career.

Fortunately, the steps leading up to the final presentation of the artists’ work have been running smoothly.

“That’s one of our museum’s missions, to bring things and make them accessible and available for our own community and for our own city,” Najafi said. “People have to travel a long way to see this in Birmingham, and we are very proud to be the first venue in the United States that is doing that.”

According to Michael Anderson, director of curatorial affairs at Oklahoma City Museum of Art, logistics seem to be the only real challenge his team has faced, mainly due to the fact that there are several pieces, all of which are being shipped from overseas.

All is in working order, and he looks forward to the upcoming opening.

“[I want people to] see the 19th century and its art in a whole new way, not the stodgy Victorian visual culture and morals with which we have long associated that period,” he said. “What’s so exciting about this exhibition is that it argues persuasively that these were the first modern artists in Britain and that they created a very different modern art, one that reflected the values of younger, bohemian generations. In many respects, I feel like Victorian Radicals is the perfect exhibition for our own time, of a century of enormous technological transformations and of younger generations who most face, negotiate and even stand in opposition to these changes.”

Victorian Radicals: From the Pre-Raphaelites to the Arts and Crafts Movement