Michael Dean’s new book chronicles the history of radio in Oklahoma and the famous figures involved in its evolution. 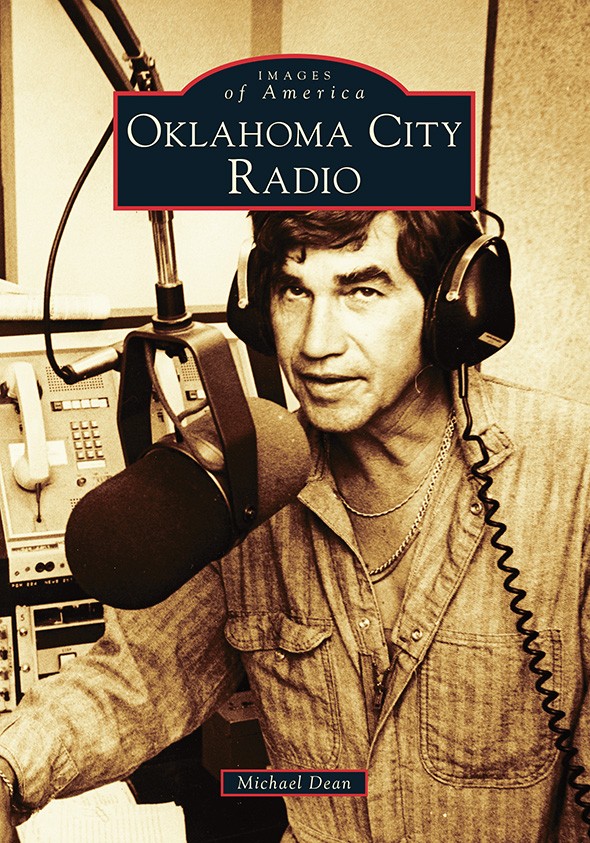 In Ardmore in 1953, Michael Dean saw a television for the first time. He was not impressed.

“The couple that lived on the end of the block bought a TV, and they had to put a tower in their backyard to be able to pick up a TV station,” Dean said. “That Saturday night, everybody that lived on the block gathered around the TV in their living room, and me and the other kids, we spent maybe two minutes in front of that TV. It was just a kind of a flickering picture, and there wasn’t much to it. We went right back outside and continued playing.”

While the book chronicles Oklahoma’s radio history, Dean said he is considering writing a sequel because he believes radio has a future as well.

“I don’t think it’s going anywhere,” Dean said. “People have said, ‘Oh radio’s dying, blah, blah, blah.’ Well, it’s doing as well now as it ever has. Ratings are still good. Revenues are still good. It’s changed and evolved over the years. If you look at Oklahoma City, there are three major corporations that own the majority of the radio stations in Oklahoma City, and two of those are not Oklahoma companies.”

The Oklahoma-based company, Tyler Media, started in Oklahoma City radio in 1971 with a country music station and found success expanding into the Spanish-language format. It currently owns several stations including Éxitos, JakeFM and V103.

Dean’s book begins in 1920 when Earl Hull and H.S. Richards built a 20-watt transmitter in the garage of a small house west of Stockyards City, establishing what would become WKY, where many nationally known programs and personalities originated. Dean credits WKY’s success to the business savvy of Oklahoman publisher and owner E.K. Gaylord, who bought WKY in 1928.

“He already had developed a tremendous reputation with the newspaper in Oklahoma City, Oklahoma, cranking out a daily newspaper that was comparable to anything in New York, Chicago or Los Angeles,” Dean said. “When there was an opening, he would hire the best person he could find. He would make sure they had all of the tools that they needed to be able to do their job, and then he would support them to the nth degree.”

One notable example, Dean said, was a man Gaylord hired in 1937 to do play-by-play commentary for University of Oklahoma football games.

“There was a guy working at KCMO in Kansas City, who on Saturday nights and Saturday afternoons, was recreating football games,” Dean said. “Now, back then, Western Union would send out the abbreviated play-by-play of particular football games so you got every play. This was a fairly common practice in large cities — you’d have an announcer and a couple of sound effects guys working together, and they would recreate the football game from the wire copy they were getting from Western Union. So this guy was recreating football games on KCMO in Kansas City. Well, he applies to the OU job at WKY, and they hire him; only problem was he’d never done a live football game. He only sat in the studio, reading the abbreviated play-by-play from the wire and then making up stuff to fill time while the sound effects guys were putting in the crowd noise and things like that. So he does the first football game and the managing editor of The Oklahoman is in the booth with them. When they get off the air, they look at each other, and the guy says, ‘Well, that wasn’t very good,’ and the managing editor of the newspaper agreed with him.

“On Monday morning, E.K. Gaylord calls man into his office, and he starts the conversation by telling the play-by-play guy, ‘I listened to the game Saturday, and I thought you did a splendid job. Keep it up.’ So he does the rest of the season, and he was the first employee that E.K. had ever hired on a contract. He was on a six-month contract. At the end the football season, they had to pay him to do something, and they weren’t going to have him sit at home and draw salary, so Gaylord calls his office and he says, ‘I really like your delivery. I like your style. I like your voice. I’m going to send you over to the Oklahoman newsroom, and you’ll be doing a couple of news broadcasts from the Oklahoman newsroom each day.’ That kid later wrote in his autobiography and in interviews and speeches and stuff would explain that for him, that was the beginning of his career in broadcast journalism. That was Walter Cronkite.”

“There’s so many other people like that,” Dean said. “Paul Harvey grew up in Tulsa. … His dad was gunned down by a gangster. He got into radio. He really wanted to be an actor, but he suffered from stage fright, while sitting in a room in a studio with just a microphone didn’t bother him in the least, but that’s how he got his start in radio, was at KVOO in Tulsa.”

“It’s what we are as Oklahomans that whatever field we’re in, whatever endeavor we’re pursuing, we will typically exceed and excel at that far more than somebody from Kansas or Arkansas or Texas or whatever,” Dean said. “Case in point, Oklahoma has produced more astronauts than any other state in the nation since the beginning of the manned space program. That’s unbelievable, but it’s true. Tom Stafford is an example of that. He flew Gemini 6, flew in Apollo, flew in Skylab. His mother came to Oklahoma in the back of a covered wagon from Kansas, settled down in Weatherford and lived to see her son fly in space.”