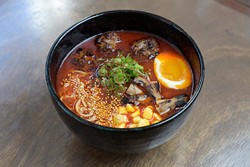 There is no shortage of Plaza District cheerleaders. The residential area surrounding NW 16th Street is flush with young, hip residents and families building the area into a thriving community. And district businesses, including art studios, a performance theater and a bevy of restaurants, seem perpetually full.

The sheer number of success stories packed into less than a half mile of the city leads to a district that can feel a little crowded, but that’s a novelty in itself.

Following the booming popularity of nearby Empire Slice House, Pie Junkie and The Mule, chef Jeff Chanchaleune’s ramen parlor packs in crowds from lunch through dinner and into the night.

Chanchaleune was one mind behind Kaiteki Ramen food truck, which debuted in the Plaza, and he teamed with the hot hand of Rachel Cope in 2015 for a series of ramen pop-up dinners called Project Slurp while they tested recipes for what would become Gor?.

Those dinners began to sell out at a rapid clip, which helped push Gor? from concept to concrete in July.

Anyone waiting for crowds to die down in intervening months will be disappointed to hear that seats are still hard to come by. A week ago, a wait for a single seat at the bar for dinner was 45 minutes.

It is worth the wait.

From beginning to end, Chanchaleune’s menu is a joy. Even during my extremely brief stint as a vegan, the food was on-point and satisfying.

Ramen is absolutely Gor?’s main draw, but ignoring appetizers would be a mistake. I credit Kaiteki with awakening my love for Brussels sprouts, and that good work continues at Chanchaleune’s new venture with a fried Brussels sprouts salad ($7). Studded with ruby-red beets, crispy fried shallots and a miso vinaigrette, the salad is mostly tender halved sprouts that have spent some quality time in the fryer. Pickled Fresno peppers add a piquant zing to the dish’s earthy, savory notes.

It’s a nice salad to share, but I prefer ordering it with people who don’t particularly love Brussels sprouts or beets. Either they’ll be converted by the blend of textures and flavors or you’ll get to eat it all yourself — a win-win.

Cauliflower is one of the most boring vegetables imaginable, which makes Gor?’s version even more impressive. Fried cauliflower florets are covered in crunchy seasoned panko breadcrumbs and tossed with an umami-rich anchovy vinaigrette.

Adventures in frying continue with Gor?’s nikuman. The chef spent a long time perfecting his sticky steamed bun recipe, and the results are phenomenal. Along with Chae and recently announced Urbun, Oklahoma City is experiencing a steamed bun surge that I hope never recedes.

The most popular nikuman is the deep-fried pork belly bun ($8), which comes with pickled cucumbers, green onions and a mildly sweet plum sauce that helps balance the pork’s savory, fatty flavor. Pork belly is basically uncured bacon, and when it’s treated correctly, as it is here, it’s lusciously irresistible.

Vegan tofu nikuman ($7) gets a savory boost from mushroom sauce and has the same tender and slightly chewy steamed bun.

Its texture is amazing and habit-forming. Each bite drives the next, as diners are propelled through the tiny handheld sandwich, trying to recapture that first satisfying pull when they chew the bun.

Nikuman come two to an order, but it will require an unholy amount of willpower not to hoard the entire basket. Preserve your relationships and just order more to begin with.

Now for ramen. First up is tori paitan ($10), which translates to “chicken white soup.” That’s the thick and creamy broth into which all ramen goodies are submerged.

In this case, it’s thick slices of fall-apart tender pork belly and a perfectly cooked half egg. Pork and egg add a lot of flavor, fat and heft, but I’d like to give a shoutout to less-discussed ingredients: bamboo and green onion.

The richness of the soup and slurpable noodles would be so much less enjoyable without the crunch of onion and fibrous bamboo.

Texture is integral to this dish, and they complete this bowl of ramen.

Aptly named spicy miso ramen ($12), which has juicy pork meatballs with a lovely char, crunchy and sweet corn in a blend of chicken broth and roasted garlic miso, is much hotter. If that’s not enough heat, Gor? makes a garlic chili bomb for 50 cents.

Those who love noodles as much as I do can get their fill with kaedama, a noodle refill for $2.50.

Most people find themselves sated by a normal portion, but it’s nice to know there are more noodles waiting when you’re feeling especially ravenous.

Service is wonderful, which is normal for an 84 Hospitality Group restaurant.

The building can get pretty warm in the summer, so I’m hopeful an air-conditioning fix is on the way. But even when clientele is sweating, the food is enough to keep customers filling seats daily.

What works: Excellent ramen choices and steamed buns. What needs work: When it’s crowded, temperatures get uncomfortable. Tip: Gor? does not do takeout or reservations