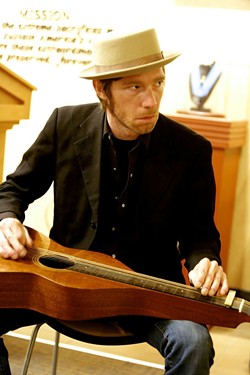 If ever there was an all-American troubadour, Ashley Raines is it.

At age 14, the acoustic, Americana singer-songwriter ran away from his home in Kansas, hitching rides and jumping trains as both a traveler and a musician.

He said leaving wasn’t something he felt inspired to do. He wasn’t mimicking rail-hoppers like Pete Seeger or Woody Guthrie. In fact, he said, there was nothing at all romantic about his compulsion to wander.

“I wasn’t inspired. This was a life-or-death thing for me,” he said. “I was being pushed by some force. I didn’t leave Kansas City to be homeless or think it was a good idea to travel like that. It was necessity.”

For 20 years, he has traveled through Oklahoma on his journeys, playing songs and making music. Before that, he hitchhiked through the state as a vagabond.

“Oklahoma seems to keep getting in my way, so I stop,” he said.

“[Musician] Don Conoscenti turned me onto some great places,” he added. “Eventually, I met Jeff Rodgers, the owner of JJ’s Alley, and he put me on a sampler with John Fullbright and Parker Millsap.”

That compilation and his life experiences define his prolific work. His most recent album, After the Bruising, dropped late last year. His music conveys tender American ruggedness, like the weary, warm caress of a sharecropper’s hand upon his wife’s cheek after a long day. When he plays live, his lonely sounding lap steel is a kiss from chapped, cracked lips. There’s always a obsession for one more song, one close, swaying dance before the lamplight fades away.

His view of his audience and its view of him is unobstructed, and his lap steel guitar — a custom, hollow-neck Weissenborn — provides added intimacy to his performances. It quickly becomes a vital voice.

The harmony is by design.

“Cripple Creek Guitars offered to make me a custom Weissenborn, and we worked together to get a huge tone that complemented my voice and lent itself to my style of playing and writing,” he said.

He doesn’t romanticize his instruments, either. They’re not magical or mysterious; they’re practical, a means to an end.

“Well, I use them. You know? Like instruments,” he joked. But he’s not joking.

“I use them to feed myself. I keep them locked in a box but for a couple hours a day in which I take them out to punish them,” he said. Raines is prolific: He has released 13 albums in 15 years.

But the number of albums and songs isn’t important. He would rather not keep track of such things; music is something he’s compelled to make. For him, it’s like breathing.

“If I were a doctor, I would doctor. [I] wouldn’t count how many folks I had doctored,” he said. “Folks don’t keep track of how many groceries sacked or walls painted. So I write. I don’t spend a lot of time thinking about the what or why.”