“The challenge for us is how do we modernize that and make it relevant to the particular programming that we’re doing,” Owens said. 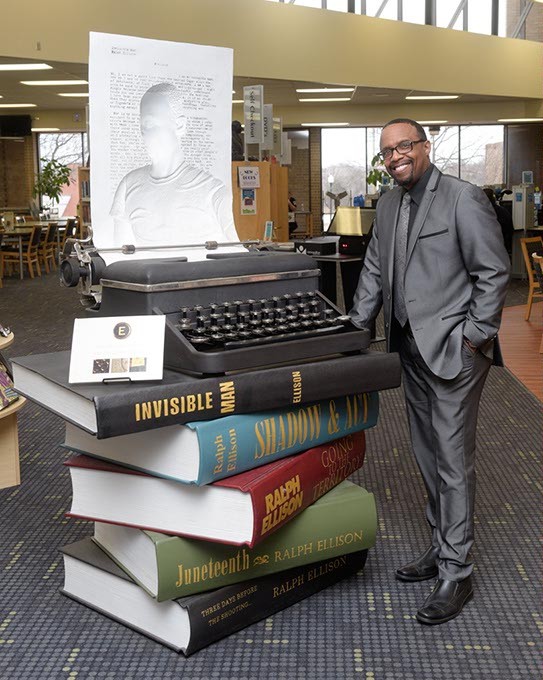 “I came to Oklahoma City because of Ralph Ellison.”

To Michael Owens, originally from Milwaukee, Ellison is both a historical icon and a visionary.

The importance of Oklahoma City-born novelist, essayist and artist Ralph Waldo Ellison’s legacy becomes apparent in Owens’ own work at the foundation and as community development director for the Alliance for Economic Development of Oklahoma City, which gives him a unique perspective on the challenges facing blacks in Oklahoma today.

Black Oklahomans face both practical and ideological issues, he said.

Unemployment, food scarcity and information deserts, along with poverty and challenges in the education system, affect blacks while questions of “true American” identity continue to circulate in the larger cultural discussion.

“I think for blacks, we have always struggled to fit within this society …  and to be heard in this society in a way that reaches the level of many of our counterparts,” Owens said.

To Owens, and to Ellison, these issues boil down to perception: how black identity is seen or not seen.

“One of the things the foundation tries to do is to assist black people in telling their own story,” Owens said. “I think American history is laced with others telling the story of minority peoples, and so the foundation gives voice to that social expression.”

“We try to move from the macro-level to the micro-level,” he said.

Owens said labels and stratifications — markers of difference — persist on the large-scale level but become more human on a smaller scale.

Literature, renowned for arousing empathy, provides a space for changing perceptions, Owens said. Discussion of novels — especially those written by blacks and other minorities — encourages continued conversation outside the author-reader dynamic.

One way Ralph Ellison Foundation seeks to change perceptions is through a curriculum based on Flying Home and Other Stories, a posthumously published collection of Ellison’s early short fiction. Owens said students connect with the 13 pieces — six of them published for the first time in this book — that semi-autobiographically wrestle with themes including the Jim Crow South, the Great Depression, war, Ellison’s father’s death, chasing his dream to become a musician and more.

The works incite discussions about cultural identity, race and gender. The foundation launches the curriculum 2:30 p.m. Tuesday at Douglass High School, 900 N. Martin Luther King Ave., Ellison’s alma mater, where he also played football and studied music before graduating in 1931. His Flying Home stories were written between 1937 and 1954, as the young man developed his literary voice. Ellison died in 1994 at age 81.

Owens said that Ellison’s literary talent lies in his broader approach to race and culture and in his ability to impact those who most need to hear the message. His perspective, while shaped by his identity as a black man, did not limit his ability to speak to everyone on a human level.

“Sight can be deceiving,” Owens said. “Ellison is talking about a pure kind of vision of who and what we are experiencing in our lives. He had a more holistic view of the individual — it was almost a 360-degree perspective of what constituted the human experience.”

The foundation folds Ellison’s philosophy into all of its efforts, Owens said. The organization’s In the Light Bulb Room community discussion series launched its 2017 discussions last week in Oklahoma City and continues later this year with events in Norman, Stillwater and Tulsa.

“The challenge for us is how do we modernize that and make it relevant to the particular programming that we’re doing,” Owens said.

The Ellisonian focus on American acceptance and multiculturalism provides answers even to today’s problems, he said.

Owens characterized the foundation’s mission as providing a platform, not a lectern. By creating spaces for young writers of color to examine their self-perception, influenced by larger social understandings of identity, the organization helps diminish the cultural invisibility experienced by many blacks.

“We have to change that perception, but you — you’re fine, you’re great,” Owens said of the message Ralph Ellison Foundation imparts to writers.

While there are divisions and struggles within the black community, Owens said a new generation of black leaders is willing to move the community in a more inclusive direction.

“I think the challenge in the next coming decades is maintaining a sense of continuity to the past,” he said.

Owens also thinks Ellison and the foundation represent what is greatest about Oklahoma.

“The Ralph Ellison Foundation belongs to Oklahoma; Ellison is an Oklahoman,” he said.

If Ellison’s legacy serves as an indication, it is possible to truly see one another at a human level. Owens said Latino, Asian and black communities all provide amazing opportunities for cultural growth in Oklahoma.

“If we can begin to bridge the gaps that divide us, the nation will look at the ‘Oklahoma experience,’” Owens said. “It’s possible.”

Learn more about Ralph Ellison Foundation at ralphellisonfoundation.org. Listen to Owens’ socially conscious podcast, One Mic, One Voice, which he cohosts weekly with De’Shaun Thornton, at onemiconevoice.com.