What works:Tamashii’s chasu pork belly is delicate and crispy.
What needs work:The Japanese curry needs more punch.
Tip:Read the menu before you arrive.

In 2015, when Wakana and Matt Sebacher made the decision to open Tamashii Ramen House in Midtown without experience in the restaurant industry, the couple knew that they were taking a risk.

As we prepare to enter 2020, a second Tamashii Ramen location in Edmond, 132 E. Fifth St., is getting ready to celebrate its one-year anniversary in December.

“I was an accountant, and my husband [Matt] was in IT,” Wakana Sebacher said. “We had never worked in a restaurant before, but we decided that it was something we wanted to do together. If it doesn’t work out, it doesn’t work out, but we’ll at least try because life is short. We tried, and it went very well.”

Tamashii’s original location in Midtown has become such a hit that it helped establish a foothold for Japanese ramen in a city known for its abundance of Vietnamese pho.

Wakana moved to Oklahoma from Japan to go to school at University of Central Oklahoma. Her familiarity with Edmond and requests from customers at the original location led them to opening the second Tamashii location in a relatively new development that also features Hideaway Pizza and Skinny Slim’s and is close to the excellent Fait Maison French restaurant.

“There were a lot of people telling us that they live in Edmond and came to the [original location] because they work downtown, but the [rest of their family] didn’t want to go downtown to eat. … I used to live [in Edmond] and knew there weren’t many locally owned restaurants, a lot of franchises or chains. As a student, we wanted to have something unique,” she said. “We knew there was a need and guests were telling us, so why not?”

When Oklahoma Gazette visited the original Tamashii location for a review in 2016, the only negative was that it was so popular that finding a seat was difficult.

When planning the second location, the Sebachers sought to alleviate that problem by switching from traditional sit-down service to a hybrid of fast casual with a full-service twist.

Guests arrive at Tamashii and order with the staff at the front before being brought to a table as servers refill drinks, answer questions and deliver food to the table.

“We saw fast causal as the ‘new thing’ for the service industry. We noticed there are a lot of restaurants that can be full-service are doing fast casual and still nail it; it’s a good restaurant with good service,” she said. “We thought we should try a different style.”

It allows the kitchen to get started on tickets and the restaurant to turn tables faster. It also means that customers have to have a pretty good idea of what to order before they get in line.

“I thought we were going to have more time to decide,” my wife said to me as we stood in line.

The decision process can be difficult because Tamashii offers seven varieties of ramen, which include the pork-based tonkotsu (in regular and garlic versions), miso butter with corn, spicy ramen, curry ramen, vegan and tsukemen; the latter of which are “dipping noodles,” a wider variety of noodle served with a sauce make of pork and a fish base on the side.

We started the meal with an order of Japanese rice curry as an appetizer. One of the staple meals that my mom cooked while I was growing up was chicken with onion, potatoes and carrots in the brown curry sauce that is enhanced with the curry packets from brands like Golden Curry and Java Curry. I hadn’t had the dish in over a decade but got a craving for it a few weeks ago and bought one of the curry boxes at Super Cao Nguyen. The warm and unique curry flavor was introduced to Japan from India while it was still under British colonial rule, but it’s a richer flavor enhanced by chicken stock rather than coconut milk. 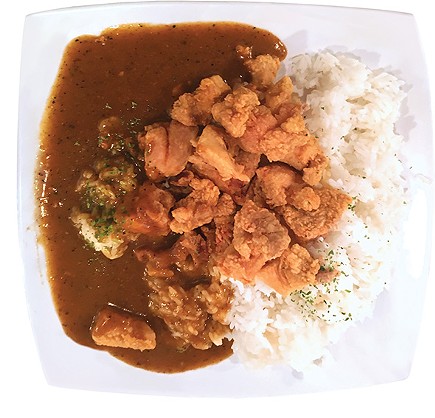 I thought Tamashii’s version was going to blow the box packet version out of the water; I could tell the curry gravy was constructed from scratch in the Tamashii kitchen because it had some nuanced flavor, but I wanted a little more spice. It’s paired with chicken karaage — dark meat coated in a light amount of wheat or potato flour and fried.

The biggest draw at Tamashii is its tonkotsu broth, which is a sumptuous blend made by hours of pork bones and spices simmering on the stove. The garlic version only enhances the fact. Slowly adding heat to cloves of garlic over the course of several weeks makes black garlic. The process brings out hints of sweetness reminiscent of tamarind or balsamic vinegar. I wasn’t a huge fan of the fried garlic in the dish because it brought out a borderline acrid taste, but Tamashii’s chasu is the best version I’ve had with ramen in the metro area.

The miso corn ramen is a great option for those who love miso. The few bites I had weren’t very spicy, but it increased the more the dish was mixed, and my wife brought home leftovers and said the next day’s version was much spicier.

Tamashii entertained a hearty dinner crowd that seemed to be having fun as projectors displayed three different anime shows on the walls behind guests. Despite the popularity, we had no problem getting a seat. If the Midtown location was at the same capacity, we very well might’ve had to wait. I think Tamashii’s blend of counter service with full-service elements is the right model for its continued success, and I look forward to returning.