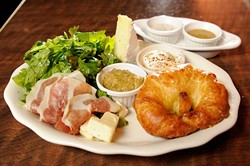 “This place is not that place.” In some ways, the success of Ludivine has haunted The R&J Lounge and Supper Club. Patrons who were enamored with the hyper-local farm- to-table concept from owners Jonathan Stranger and Russ Johnson might have been confused when the throwback bar opened its doors with a menu quite consciously out of the past.

But over time, the new venture has built a solid customer base and found a loyal following for the dimly lit dining room, stiff drinks and classic fare.

“It was a rollercoaster in the beginning, like having a kid,” Stranger said. “Right now, we’re cruising along and fine-tuning the experience.”

The R&J is, first and foremost, a bar. The drink menu is chockablock full of classic cocktails. These aren’t modern renditions of classic drinks — they’re just the classic drinks. Patrons can choose from different brands of liquor, and the bartenders put plenty of care into re-creating old favorites like the Painkiller, Harvey Wallbanger and Sloe Gin Fizz.

One very popular feature from the beginning was sparkling white wine on-tap. Served in carafes or by the glass, it’s a swanky touch of class that keeps with the decor, which is important to the owners.

The wallpaper doesn’t just look old; it is old. The naugahyde and design of the chairs were such relics they had to be resurrected by companies that no longer made them in order for them to be purchased.

But it’s worth it for the experience, Stranger said. 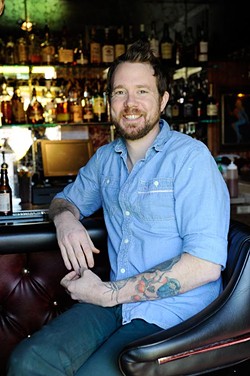 “Some things we lose for a reason, and some are just forgotten,” he said. “We think we’ve brought back something people treasure about a very specific time.”

That includes a menu filled with dishes that saw their heyday long ago, foods that taste like memories.

The appetizer menu is filled with kitschy classics like cocktail wieners ($7.90) in a sweet and savory sauce served over a can of Sterno to keep them hot and cheesy crab toast ($8.90), a decadent blend of creamy melted cheese, white bread and Maryland blue crab meat. It’s over-the-top in that way restaurants used to be because dining out was a very special occasion.

The relish tray and spreads tray are also throwbacks. Stranger said the relish tray items ($4.90 each or $12.90 for three) are 100 percent vegetarian, which is both period-accurate and convenient for those on a restricted diet. He’s especially partial to the classic spicy cucumbers.

One new addition to the menu is the shrimp cocktail, Stranger said.

“I don’t know how we missed that one,” he said.

The simple blend of perfectly cooked shrimp, a chilled glass and a spicy horseradish cocktail sauce is both elegant and timeless, not to mention deeply satisfying.

The R&J also features seafood on the entrees list, with mussels marinière ($14.90), fried catfish over a sausage-and-tomato stew ($15.90) and the light, ocean-kissed sweetness of the lobster roll ($19.90).

A bit heartier fare is the pork and beans ($16.90), which is about as “chef- ly” as Stranger’s menu gets with big, bone-in pork shanks braised until they fall to pieces with the slightest poke of the fork.

The croque tartine parisienne ($14.90) is the id’s appetite manifest. A big slab of bread is covered with ham, bechamel sauce, Gruyere cheese and two fried eggs. Each bite is a mess waiting to be made and a joyous experience for the tongue. It’s a heavy dish, a true meal, and it requires either a large coffee or a long nap to survive the aftermath.

The lamb burger ($15.90) is not a classic supper club dish, as Stranger will tell you, but it was a best-seller at Ludivine, and it continues to find many admirers at The R&J. Part of the appeal is the quality of the meat, which comes from Walnut Creek Ranch in Waynoka and is raised especially for use in this burger.

The flavor is out of this world. Lamb tastes just enough like beef to have broad appeal, but it is leaner and mildly gamey and pairs amazingly well with the blue cheese topping. Like the croque, this burger is a messy mouthful. But when it tastes this good, who cares if you need a napkin?

Still, it is a salad that made me a believer. The Special ($11.90) not only has tender greens but includes a poached egg, prosciutto, a wedge of Brie, a croissant and fresh jam. It has a little something for everyone — or, if you’re smart, a lot of something for just you.

Finally, there is the beef stroganoff ($15.90), which famously (or infamously) uses a can of cream of mushroom soup as an ingredient. If that seems incongruous with what you think about Johnson and Stranger’s approach to food, understand this: It just tastes right.

The touches— fresh noodles, expertly seasoned and cooked beef — are all still there, but in all the preparations they tried, the one that tasted the way that wanted was the classic household dish with canned soup. Taste it yourself and you’ll see that it was a decision well-made. Since opening,

The R&J has adopted a few new features. A brunch menu on Saturday and Sunday, including the DJ Brunch on that patio Sunday mornings, has found a following, especially for those who enjoy a cocktail with breakfast. They’re even printing up a limited run of Brunch Club cards that will carry special benefits for members. How can you earn one? That’s a secret they won’t tell.

But after six months in business, The R&J is no longer OKC’s best- kept secret.

Print headline: Kitschy class, The R&J Lounge and Supper Club fine-tunes its retro menu with everything from wine on-tap to cheesy crab toast and beef stroganoff.

What works: Classic cocktails and throwback dishes. What needs work: With just a few tables, it can get crowded fast. Tips: The Tiki drinks are strong.