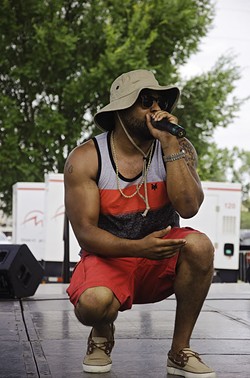 J French is a tireless salesman, but not of drugs — not anymore and never again.

These days, the local rapper and former Austin-based car salesman pushes his music, not crack cocaine. Not yet a believer in French’s music? That’s probably because he hasn’t finished making his pitch, which is a pretty good one.

Point one: He comes from a proud musical heritage. His father, Brother Num, is a New York-based reggae percussionist who toured with legendary Burning Spear for more than a decade.

Point two: He understands music theory. French’s father had him playing instruments from a young age. He was writing sheet music before he ever wrote a rhyme. In the digital age, where it is sometimes said anyone can be a rapper, French stands out with structure and technique.

Point three: His music has seen quantifiable radio success. His single “Dallas,” a speedy but classed-up and chilled out post-club anthem, has been a most-requested track at stations in Dallas, Houston and Austin, Oklahoma City and Augusta, Georgia.

One point French will never argue is his brief history selling hard drugs.

“It’s something I don’t even talk about,” he said. “I would never rap about it. You will never hear a lyric talking about that in my songs. I don’t exalt it, not that I ever did.”

French’s father had him on a West African djembe drum almost as soon as his son could talk. In many ways, music became like a second language, something the two could share.

French said his dad brought him out on stage with Burning Spear as early as age 5 or 6, but more frequent were extended periods of separation.

“Him being on tour, being away, became normal by the time I was around 12,” he said. “He wasn’t really around much, but he’d come back every other year or every year or twice a year sometimes. He still had his house out here.”

French moved on to several other instruments, including the viola, recorder, trumpet and cello, before hip-hop took full force in his life. His ambition started writing raps in secret as a teen, and he eventually found a path that would lead him to places he never thought he’d go.

In 2004, French moved to Austin for three years to further his music career with the help of rapper friend Big Neal. That year, Neal’s album Live from Iraq, recorded while the former soldier was deployed in the Middle East, was making waves in the media.

It was more than the spectacle of it all that interested French. Neal gave him full use of his studio; access that seemed like an impossible dream in Oklahoma. French also felt like the move put him in the thick of the hip-hop world. Texas rappers like Chamillionaire, Paul Wall and Mike Jones took the hip-hop spotlight away from the coasts in the early to mid-2000s.

French started pushing his own CDs in a local gas station parking lot, something that proved to be a true personal talent. He became so good at selling himself and his music that one day, a Volkswagen dealership sales manager offered him a job.

“This guy says, ‘Have you ever sold cars?’ He told me to just come up [to the lot],” French said. “I didn’t even have to fill out an application until it was payday, and that was because I had to get the check.”

French rose as one of the dealership’s top salesmen, but when his daughter was born in 2005, he found himself in need of a lot more money. When he learned a drug-dealer friend was making close to what he made in a whole week in one day, he began to rethink his convictions. To better provide for his family, he started selling drugs, too.

The rapper was in and out of the drug game in a short, but eye-opening few months. It’s a time he’s not proud of and doesn’t like reflecting on, let alone making a song about. French remembers listening to rappers boast about selling drugs before he had to sell them himself. The experience changed the way he looks at that kind of music.

“I know better,” he said. “I’m listening and thinking, ‘How true is that? How much sense does that make?’ Before, it didn’t have to make sense. Now, it has to make sense.”

French admits to being a nerd as a young kid in school, words fans are unlikely to hear from the mouth of image-conscious rap kingpins like Rick Ross.

“I was playing a viola in the fifth grade,” French said. “My friends didn’t even know what the hell that was.”

Often what is perceived as nerdy at a young age becomes a strength later on. French uses his understanding of chords, keys and melodies as a built-in advantage over many of his peers. It sometimes frustrates him when these things are not as apparent to other artists.

“I understand these different things about music theory that I expect other people to know when they’re making beats,” he said. “I’ll have people send me a million beats and I don’t like any of them.”

French composes his raps like he would any other instrument in the song. His goal is not to copy what a beat is doing, but to blend with the instrumentation.

“What I try to do is make sure everything flows right,” he said. “When I’m doing a melody, I’m making sure I’m using my voice as a different instrument.”

Now based in Oklahoma City, French is constantly plotting his next move in music.

J French with Original Flow and The Fervent Route