Rapper LTZ celebrates his new album with an appearance at WestFest 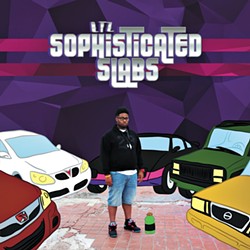 The appearance also doubles as his official Sophisticated Slabs album release party. The WestFest main stage can be found on NW 41st Street between VZD’s Restaurant & Bar and A Date With Iris.

The smooth, instrumental beats on songs like “Warm It Up” would seamlessly fit in a playlist alongside A Tribe Called Quest. Opener “73120,” a tribute to the northside ZIP code, has a classic West Coast feel.

The emcee said he went into Sophisticated Slabs with a chip on his shoulder after someone accused him of not being a “lyrical” rapper. LTZ’s music (most often produced by Jeff “Chips” Kraetzer) might be so butter-smooth and easy to listen to that some listeners fail to take in the full effect of what the rapper is saying.

Though he has always been a relatable wordsmith, Sophisticated Slabs finds LTZ as real and personal as ever.

Aside from rapping, LTZ can also be found assisting young children as an elementary school mentor with a nonprofit. On the second half of the 11th track, “Used Up:dePRESSUREn,” the rapper talks about seeing the kids he cares about directly affected by school budget cuts. Essential supplies were no longer made available; favorite teachers could not be rehired.

Yet, at the same time, LTZ’s music career is at an all-time high. Internally, he struggles with how he should feel about himself and the world.

LTZ wrestles with emotions rarely touched by rap’s young class of “mumble” rappers. As a bit of an old soul, the emcee said he is not impressed with a lot of what he hears from rap’s newest mainstream crop.

“I think it’s very lazily done,” he said. “I see all these blog posts that say, ‘Such and such made this Top 40 beat in 10 minutes,’ and I’m like, ‘Yeah, it sounds like it was made in 10 minutes.’ It sounds like if you wanted to perform it with a band, the band would be like, ‘We don’t know what to play; these are all synth pads.’”

LTZ will instead continue to bank on the long-lasting appeal of rap’s most classic sound, the music of his father’s generation.