Rapper Sturk draws inspiration from his brother and hometown 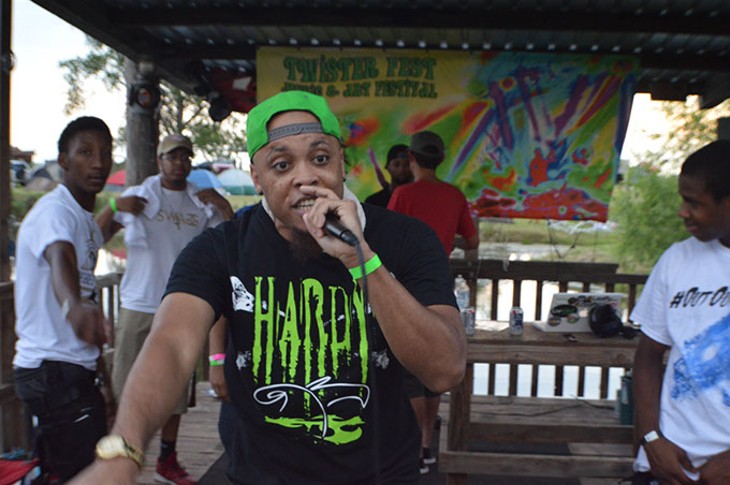 With the powerful influence of his brother guiding him, Oklahoma rapper Sturk now seeks to return lyricism to the forefront of the genre.

He commemorates this through his album Chickasha, which he independently released this summer.

“I named the album Chickasha so that people can see that there is talent here and also to show the city that they can live their dreams even in a small town,” he said.

Born in Chickasha, Sturk moved to Lawton at an early age. However, that wouldn’t be the end the city’s mark on the rapper.

His older brother, who also grew up in the city, often visited him in Lawton.

The two loved music and soon began trying it out for themselves.

“Hearing my older brother rap made me want to rap,” he said. “I would record myself rapping in my stereo, rapping over Tupac Shakur songs. I was probably 13 years old,” Sturk said.

He also listed Jay Z, Michael Jackson, Nas and Mariah Carey as artists who inspired him to take music seriously.

After returning to Chickasha years later, Sturk went to work in the studio, mostly by himself.

“I have to work alone in the studio in order to avoid being influenced,” he said. “Rap music is very trendy in its current state; everyone sounds like the next person, so I try to avoid that by working alone.”

The rapper is very self-motivated in his music and in his daily life.

“I live my life on a schedule, so it’s very easy to balance music with life,” he said. “I cut out a lot of things, including watching a lot of TV and hanging out, because it was needed in order to do what I need to do in my waking hours. I tell people all the time, ‘If you want to get the most out of your day, make a weekly schedule with a time to start and stop your daily activities.’”

Sturk performs across the state at festivals, colleges and even churches.

He said at this point, a live stage feels like home.

“If I had to describe the feeling, the closest thing that I can think of is the feeling people get when they’ve found the person they want to spend the rest of their lives with,” Sturk said.

In a state that is often seen as a challenging scene for hip-hop artists, Sturk said he’s living his dream. He said the difficulty level differs from artist to artist because each wants to accomplish different things.

He makes music for people who don’t have a voice and are trying to better themselves. He said his concept of success is more personal than it might be for other people and can be achieved just about anyplace.

“I’ve gotten feedback from people who tell me that I inspire them to live their dreams … from a girl who told me that one of my songs helped her figure out a relationship problem,” he explained. “It’s not difficult for me at all [being an Oklahoma-based rapper] because I’m chasing people more than I am fame.”

His communications degree and dexterity with media platforms like YouTube, Spotify, iTunes and Google Play definitely help, though.

The musician also works to reach people through Young World, a volunteer group he created in Chickasha that helps young adults within the community. He said its mission is to “activate and unify young adults through volunteering and live events inside the community.”

Print headline: Blood vision, Sturk’s passion for creating meaningful hip-hop grew out of the influence of his older brother.