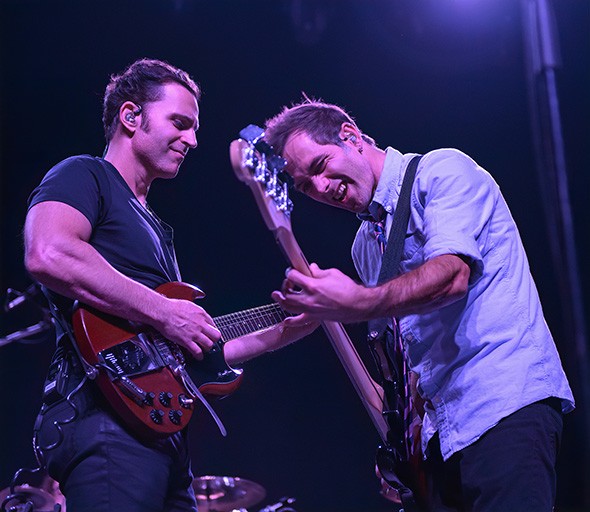 It would be hard to prove, but Dweezil Zappa said there’s a “distinct possibility” he first heard Hot Rats in utero. But the liner notes of his father Frank Zappa’s album — released October 10, 1969 — dedicate it to Dweezil, born September 5, 1969.

“It’s been a fan-favorite album for a lot of reasons,” Dweezil Zappa said. “My dad’s guitar playing became really prominent on the record, and there were just other textures and combinations of instrumentation that were different but appealing. It just has always stood the test of time.”

“Every single element is
inspected, and we try to make
it sound as close to
the record as we can.”
—Dweezil Zappa tweet this

Announcing the Hot Rats Live tour on his website, Dweezil Zappa wrote that he wanted to present a “faithful DNA level audio reproduction.”

“It’s one thing to learn the notes and the rhythms and all that stuff,” Dweezil Zappa said. “If you’re trying to make it evocative of the actual sound of the record, there are so many other deep-dive layers that you have to go through to do that. We don’t try to make it sound modern … so we do a lot of research to find out what instruments were used, what equipment was used to record the instruments. … Every single element is inspected, and we try to make it sound as close to the record as we can. When I listen to the recordings of the shows night after night, we’ll even tweak those a little further.”

He compared the process of reverse-engineering the album to attempting to recreate a favorite dish from a restaurant.

“Ultimately, the reason that I spend so much time on the details of these things is that it really was a big part of the records themselves,” Dweezil Zappa said. “My dad’s records have a very audiophile kind of production standard to them, and we always try to really take care to make sure that we can present the stuff in the best way possible. We don’t just kind of power our way through the stuff and think, ‘Who cares about this one?’ We always really pay attention to the details.”

“My dad did not do what I’m doing in a live situation,” Dweezil Zappa said. “It was not his intention to recreate the song on the album. He only worked with what was within his band at the time, so if he had different instrumentation than what was on the record, he would rearrange the material for the stage for that band. … Because he didn’t try to replicate the records, fans never got a chance to hear it in that way. … It adds a little different, special quality that is an option that wasn’t an option before.”

In January, Oklahoma City Philharmonic performed Frank Zappa’s “The Dogbreath Variations.” Dweezil Zappa said what he and his band are doing is not dissimilar.

“A lot of times people think if you’re going to perform somebody else’s music, you’re supposed to change it and make it your own and do something different with it,” Dweezil Zappa said. “I always bring up the point that an orchestra is essentially a cover band. They’re playing somebody else’s music, but their job is not to change it. Their job is to play it the way it was written, and that’s how I perform my dad’s music. … It’s no different than them playing Beethoven or Mozart or whatever.”

As band leader, Dweezil Zappa said he has a different management style from his father.

“He was the writer, and he had the ultimate vision of what he wanted to do, so it was 100 percent whatever he wanted to do,” Dweezil Zappa said. “I know what I want to do; I will be the final arbiter of the decision-making, but I’m a little more democratic when it comes to how we get there. Sometimes if people have suggestions about certain things, if I like the suggestion, I’ll certainly include it, but it’s easier when everybody has a very defined role in the band. … That’s how we’re able to learn a lot of really difficult music in a short period of time, because everybody does their homework and then we all kind of get together and put the pieces together in a group effort. It wasn’t really that way with my dad. He would hand out parts, and then he would be expecting everybody to just do exactly what was written on the page. He used to have somebody trained in the band to run rehearsals, and usually that person became the most hated band member because they were having to be the one to tell people to do something over and over. Then my dad would come in and expect that stuff was going to be all set, ready to go. We don’t really promote the hated band member situation in this scenario.”

His exacting standards and complex, demanding music meant Frank Zappa often had trouble keeping musicians in his band and his reputation could make it more difficult to find new ones.

“He experienced a phenomenon where a lot of people just wanted to have it on their resume that they auditioned for him because then it would make it appear that they were better than they were,” Dweezil Zappa said. “There are tons of people that would try to audition, and they were nowhere near good enough to be in the band. They’d waste a lot of time. … I saw it happen on one occasion where he was auditioning a drummer, and this guy sat down behind the drum kit and my dad put some music in front of him that he was supposed to sight-read and play because all the drummers had to be able to read music. Anyway, this guy, he proceeded to do some weird, hippie-style dancing, and he was tickling the underside of the cymbals. He was just doing this stupid movement, and my dad was saying, ‘OK, anytime now.’ The guy just kept doing that, and then my dad said, ‘You can’t read music, can you?’ And the guy didn’t really even respond. He just kept tickling the cymbals. And my dad said, ‘OK. Get out of here.’ Sometimes people do shit like that, and you wonder, ‘Do they really think that that’s going to impress somebody?’”