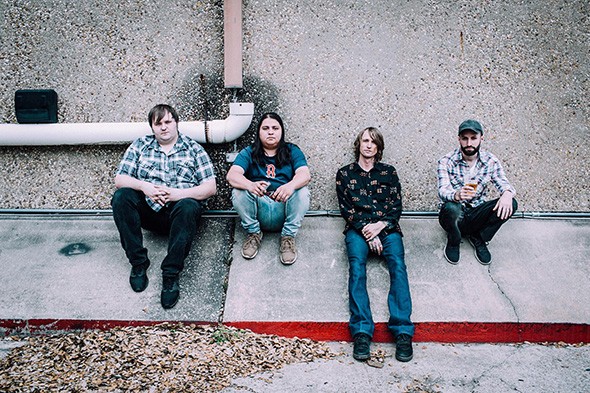 Norman’s Psychotic Reaction recorded Messiahs of Voltage over two days in 2015, and more than four years later, the band was ready to release it.

“It’s been a long time coming,” guitarist and vocalist Robert Layton III said of the album that was released online Jan. 21. “I finally had the time off from work and the mental capacity to do it.”

Messiahs of Voltage — which Layton described as “high-energy, electric rock ’n’ roll freak-out kind of shit that just makes you want to lose your shit” — was recorded and mixed by Steve Boaz at Norman’s Breathing Rhythm Studio in August of 2015, but Layton said Psychotic Reaction “put it to the wayside” in favor of extensive touring.

“For the longest time, we were just a regional band,” Layton said. “We just played here in Oklahoma — Tulsa, Oklahoma City, Norman — Dallas every now and then, maybe Denver or Wichita, but we never ventured out. We did that for years and years, almost nine or 10 years just like that, like we didn’t tour heavily until 2016. We decided we have to tour anywhere from three to six months a year. That’s the only way we’re going to get signed, the only way we’re going to get on any kind of anything, be recognized, play any festivals, get a booking agent, a label, to play Europe. We have to tour. That’s what bands do.”

Layton formed the band with guitarist and vocalist Nolan Dacus in 2006, but the two have been the only consistent members through several lineup changes. The three-piece iteration that recorded Messiahs of Voltage and included drummer Whitt Daniels is not the same as the band’s current five-piece lineup featuring bassist Kavan Barnett and drummer Rodrigo Serrano.

Layton said Psychotic Reaction’s demanding work ethic has been a deal-breaker for past members.

“We don’t want days off,” Layton said. “We sleep in our van. Everything we do is fully financed by us going out there working a shitty job. … It’s hard to find people that, for one, understand that and, two, will actually fucking do it.”

Dacus said playing high-energy rock ’n’ roll night after night for months on the road can be tiring, but he loves it too much to stop or even slow down.

“When I’ve had a real long day and have only slept like four hours and the four hours of sleep was in the front seat of our van or something, I’ll get on stage, and I’ll feel like I didn’t do that great of a job,” Dacus said. “Then when I get off the stage, and I talk to one of my other band members, I’ll be like, ‘Man, I didn’t feel like I was going as hard that time,’ and they’ll be like, ‘Yeah, you definitely weren’t going all out as much as possible, but you were still going harder than anybody else at the show.’ ... Honestly, the secret for me is if I’m really not feeling it, I drink, like, three Red Bulls right before we go on stage. ... Then I start to feel like I’m moving at normal speed and everything else around me is moving at half speed. ... I just love to play. It’s my favorite thing to do. … Even if we’re playing a show on a Tuesday in some weird place like a small town or something and there’s nobody there, I’m so happy just that we could even get all the gear out and play a show.”

Even the worst parts of touring are better than working his day job.

“I like to volunteer to load all the stuff into the van and, like, Tetris it in there because when I’m not on tour, I have to do construction,” Dacus said. “Sometimes I do oil and natural gas construction. … It’s always kind of hard labor a lot of the time, and so when I’m on tour, I just volunteer to do that stuff because, honestly, loading gear is kind of like the worst part of being on tour other than that you get to sleep some weird places and stuff, but ... If that’s the hardest thing I had to do all day, then my day is going pretty good.”

“The head of Jerry Garcia” 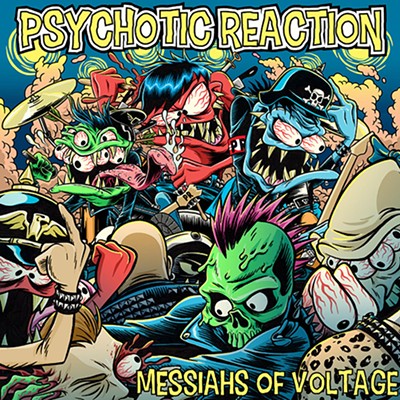 Songs from Messiahs of Voltage are still included in Psychotic Reaction’s concert setlists, but they might sound a little different now.

“We still play a lot of the songs live,” Layton said. “The only difference is we have a bass player now, so it’s totally changed up a bit … but overall the attitude is the same. It’s still very aggressive. If anything, our live shows have just continuously gotten more and more aggressive, tighter, more raw.”

“Born on the Killing Floor” draws inspiration from dystopian science fiction by Aldous Huxley and George Orwell, while “Gas Station Beer” is about what Alcoholics Anonymous might call “problem drinking.” The album finishes with a cover of The Stooges’ “T.V. Eye” that concludes with the reel-to-reel tape running out in the studio.

“’Tussin” demands “the head of Jerry Garcia on a platter.” Dacus called it the “antithesis to taking acid and listening to The Grateful Dead.” Layton said the song is a darkly comedic twist on personal experiences.

“It goes back to us being in our youth, drinking Robitussin, taking cough syrup because we couldn’t get high any other way, because we were bored, but it’s kind of funny because the song is written from the standpoint of a person who has just hit rock-bottom so they drink Robitussin,” Layton said. “We have these serious feelings, but at the same time, you can’t take yourself too seriously because then you become a joke indefinitely.”

The band plans to release another album of more recent songs in the spring.

“By the time we had [Messiahs of Voltage] done, we were already ready to record the next one,” Dacus said. “And then, by the time we got into the studio to record the next one, we recorded, like, 20 songs. ... It sucks being a band that constantly wants to put stuff out but then doesn’t have the funds or means to a lot of times, so we kind of have to pick and choose.”

The upcoming album, titled Ocean of Darkness, features a heavier, metal-influenced sound. Layton described Messiahs of Voltage as a punk record made by psychedelic fans.

“The whole beginning idea of this band is to not be pigeonholed, not to be labeled,” Layton said. “Whenever we were just getting out of high school ... I felt like we had no generation, especially then, especially now. We had no great movement like grunge, like punk, like the hippie movement. Therefore it’s just like we’re a fuck-you to all that.”

Messiahs of Voltage is available at psychoticreaction.bandcamp.com.