Here are four recently published books that come from Oklahoma writers or have the Sooner State as their setting.

Here are four recently published books that come from Oklahoma writers or have the Sooner State as their setting.


This little tome is short but stout, beginning with a brief history of pre-statehood brewing and continuing into the craft beer boom that we’re currently experiencing. Of course there are sections dedicated to Prohibition as well as the Krebs Brewing Co. (and Choc beer), but the chapters about the myriad number of defunct brewers are perhaps the most enlightening. At least until you get to the present day, that is. The latter part of the book tends heavily towards the beer brands that we’ve all started taking for granted like COOP Ale Works, Anthem Brewing and Roughtail Brewing Co., but there are sections dedicated to some smaller but influential operations like Battered Boar Brewing. Having just been published this year, this book will lend itself to a revised and expanded edition in a few years as the nascent industry continues its ascent.

Half Outlaw by Alex Temblador


As much a road novel as it is a crime story, Alex Temblador spent three years here while she earned her Masters in Fine Arts from the University of Central Oklahoma, so while the book begins in Los Angeles, a portion of Half Outlaw is set in Oklahoma City along with a brief appearance in Tulsa. The heroine, Raqi, goes to live with her outlaw motorcyclist uncle after her parents’ death as a child. Now a successful lawyer, the novel alternates between her childhood and the present as she goes on a “Grieving Ride” for the uncle who raised her. Temblador made a name for herself as a young adult writer but her debut adult novel is certainly a standout for fans of motorcycle culture, strong female characters and magical realism. 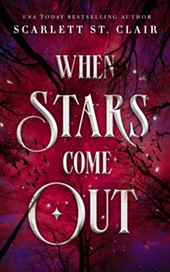 When Stars Come Out by Scarlett St. Clair


To say local fantasy writer Scarlett St. Clair is prolific is still selling it short. When Stars Come Out is her first young adult excursion and the second of three books the USA Today bestselling author has already published in 2022 (with the third slated to arrive in December). A fan of Greek mythology, this updated version of the Orpheus and Eurydice myth centers around a girl named Anora and her ability to see dead people and transform spirits into gold coins, this dark fantasy novel is quick-paced and a fascinating read.

Walking Through Needles by Heather Levy
Levy’s debut novel certainly made a splash upon publication last summer, with the likes of CrimeReads, L.A. Times, The New York Times and Publishers Weekly singing its praises. Now available in paperback, Walking Through Needles tells the story of Sam Mayfair, abused as a teen and now coming to learn that the man has been murdered 15 years later. Her stepbrother is accused of his murder and the rural Oklahoma setting serves as the backdrop to one of the darkest and challenging debuts in recent memory. Levy has proven herself as a capable and fearless writer who isn’t afraid to go where few writers dare to tread.