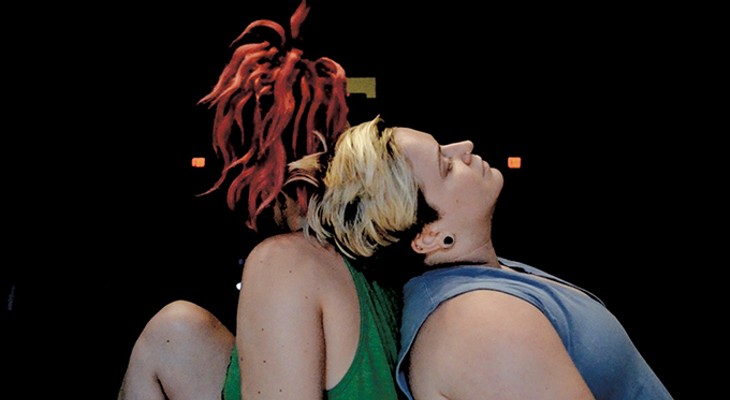 Honey, a play commissioned from performance art collective Fresh Paint Performance Lab, runs Thursday-Sunday and June 21-23 at Oklahoma Contemporary Arts Center and is the second of three planned entries in the Women in Performance series after The Other Mozart, which ran in March.

When Fresh Paint’s artistic director Chelcy Harrell began discussing the meaning of Women in Performance with the dream team she assembled to create a work on that theme, she began to notice a hidden subtext to their discussions.

“There almost always seemed to be some kind of crossover or parallels with using your body in the performing arts and also using your body for sex work or, how we address it in the show is, ‘intimate labor,’” Harrell said. “It’s something that really interested both of us to explore more deeply than what we might know on the surface or what we might think we know.”

Once Harrell and New York City-based director Katherine Wilkinson began exploring the idea with the performers, they realized many of their peers had personal experiences to draw from.

“We gathered 40 different artists in New York City, and we just started making a bunch of stuff. It was really cursory, and it was really kind of crazy and chaotic and fun,” Wilkinson said. “We were all sitting around, talking, and people were starting to feel very comfortable, and all of a sudden, people I had known for years were like, ‘I’ve done sex work,’ and I had no idea at all. I mean, there was no judgment from us … but it is something that is very pervasive and it’s everywhere, and people don’t want to talk about it, but it’s a part of their lives.”

Even using the knowledge of the performers who had done some form of intimate labor, Wilkinson and Harrell soon discovered they needed to do more research.

“We realized that we didn’t know enough," she said. "We were like, ‘Oh my gosh; we also are making some serious assumptions about what it means to be engaged in intimate labor, and from there, in the middle of that week, I remember turning to Chelcy and both of us sort of at the same time were like, ‘We need to talk to people. We need to talk to a lot of people.’”

The two conducted about 30 interviews over the next six months with women who have performed various types of intimate labor such as sex workers, exotic and burlesque dancers, massage therapists and nude models. Wilkinson conducted most of the interviews because it was easier to find people to talk to in New York City.

“I would get phone calls at very weird hours or, like, show up in the Bronx here and this woman will talk to you for an hour, which was always very scary and interesting,” Wilkinson said. “There’s very few things in New York City that are taboo. There are very few things that people aren’t just like, ‘Let’s talk about it.’”

People in Oklahoma were more reluctant to talk, especially on the record, because of the state’s stricter laws, Wilkinson said.

“It is a really taboo subject,” she said. “It is a really hot topic, and particularly in Oklahoma City with the laws that are passed, people really conflate and confuse sex trafficking versus sex work, and they’re really different things.”

Not only are sex work and intimate labor different from sex trafficking, they are similar to other jobs and roles women have in society where the distinction bears further examination.

“Because of the way our world operates, intimacy, whether it be emotional or physical, is really central to a lot of the ways that women work in the world,” Wilkinson said. “There’s a lot of emotional labor that women do.”

Honey attempts to explore the ways people negotiate and manipulate with their bodies in order to move through the world and the capitalistic economy.

“That’s something we’ve actually explored, what actually defines sex work or intimate labor,” Harrell said. “If you go to a restaurant and have dinner with someone, are you expected to … is there some kind of trade that’s involved?”

Even the “sex” in sex work is more nebulous than it might seem.

“We had a bunch of sex workers who were like, ‘I don’t have sex most of the time,’” Wilkinson recalled. “‘These guys just want to sit with me. They want company.’”

Though they used the interviews for inspiration, Honey doesn’t draw from any of them directly.

“We did not feel that we, as non-sex-workers, could speak for sex workers. That’s its own slippery slope,” Wilkinson said.

Honey focuses on the character Melissa, who is in a hotel on a business trip with a purpose that is largely ambiguous. Melissa is loosely based on the experience of an interview subject who worked as a prostitute in a hotel room during business conventions, but most of the more explicit details of her job are left out of the play.

To Wilkinson, the similarities between the sex worker in the hotel room and the maid cleaning up after her are evident.

“Both of them are intimately engaged with people’s lives,” Wilkinson said. “Domestic workers are in your bathroom … often while you are there … and they’re both trades that are really shamed societally, because these forms of labor are usually done by women and done by poor women and often women of color, and because they’re also not jobs that are considered using intellect, which is so wrong. The sex workers we spoke to were some of the smartest fucking women on the planet.”

By artfully examining one woman’s experience in detail, Wilkinson and Harrell hope to open a wider, thoughtful discussion about heavily charged topics.

“We knew that we wanted to look very diligently at one individual and really create something that allowed us to get to know one person on an intimate level, and intimate not being sex-wise, intimate like, ‘Oh I know she makes avocado toast for breakfast,’” Wilkinson said. “Those kind of tiny details that make us fall in love with people and feel close to them … and also because we’re all theater geeks, we want magic. We want the ability for one person to open up into an entire universe. … What if we took away those assumptions and just told the story of this one woman in time and space and the multiplicity that one person can be?”

Honey’s creators stress that the play’s content would not merit more than a PG rating on film and invite people of all beliefs to participate in the discussion with open dialogue after the Thursday performances Thursday and June 21.